"Give that fan a contract!" 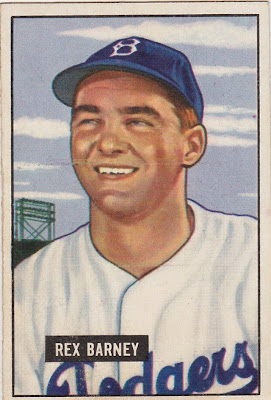 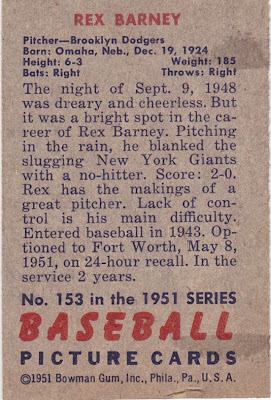 Brooklyn Dodger righty Rex Barney smiles towards the heavens from the front of his 1951 Bowman. This is one of my favorite vintage cards. It's damn near perfect. Great portrait set against a blue sky with the stadium lights in the background. The whole thing tells me that this is a guy who enjoys being a major leaguer in 1951.

Rex pitched six seasons for the Brooklyn Dodgers, just five full ones. He broke through for 15 wins in 1948 and pitched a no hitter against the Giants on September 9th of that year (there ya go Night Owl). His 3.10 ERA that year was by far the best of his career.

Rex struggled with control throughout his career (1948 seems to be his baseball 'Harmonic Convergence') and was hampered by a leg injury which led to a shortened career. But while he was through with active baseball duty after 1952, he wasn't through with the game.

He worked as a broadcaster and then in 1974 came to Baltimore as the public address announcer at Memorial Stadium and then at Camden Yards. He became well known for two expressions. "Give that fan a contract." was heard when a fan made a nice play on a ball hit into the stands, and his post-game 'Thank Youuuuuu' always meant that you were free to go fight your way out of the horrendously gridlocked Memorial Stadium parking lots. Rex worked for the O's until his death in 1997. By the time he passed he was an iconic figure in a town where he had never thrown a pitch.

My scanner cut off the bottom border of this one and turned what is a slight printing hic-up into what looks like a crease across Barney's right cheek. The corners and colors are almost as they were when they came out of the wrapper. Only a couple of stains and a chip on the reverse spoil it.