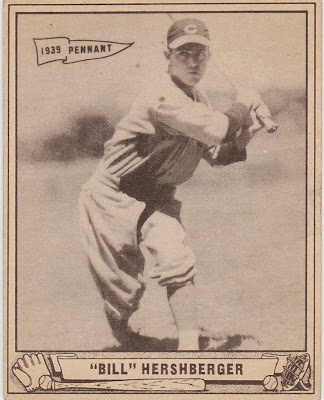 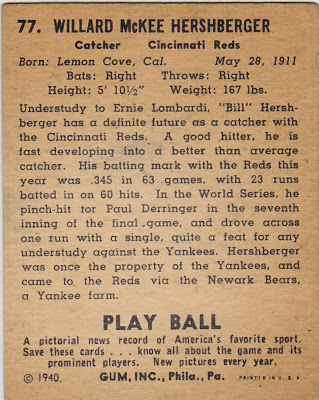 A blog I really enjoy is the Infinite Baseball Card Set authored by Gary Cieradkowski. He is a graphic artist and the cards he designs are fabulous. What makes his blog even more of a treat is the well written historic texts that accompany the cards. Most of the players he features are not the superstars we are all so familiar with but rather ordinary players with extraordinary stories.

One such player that was recently profiled is Willard 'Bill' Hershberger who was famed catcher Ernie Lombardi's back up from 1938 through 1940. That club produced two pennants (1939 and 1940) and a World Series title in 1940. Playing for a powerhouse club like those Reds teams was not enough to allow Hershberger to fight off the demons that had haunted him since he, at the age of 18, was awaked by the sound of his father's suicide by gunshot and he himself found the body.

It's not a happy story by any means. But Cieradkowski does a great job of chronicling the years that led up to Hershberger being the only major league player to commit suicide during a regular season. It's definitely worth reading the entries that make up the whole story.  Part One is here and Part Two is here.

As a matter of happenstance I've been looking at a few 1940 Play Ball cards, one I purchased and a couple that I have dug out of my collection. The Hershberger story got me digging around the 'net and I found this clean and sharp copy of Hershberger's 1940 PB. It was priced pretty cheaply so I bought it.

I've already discussed the merits of this great set. This card stands out because Gum, Inc. added a 1939 pennant to the front of (all?) the Reds in the set to signify their NL crown the previous year.
Posted by Commishbob at 7:00 AM