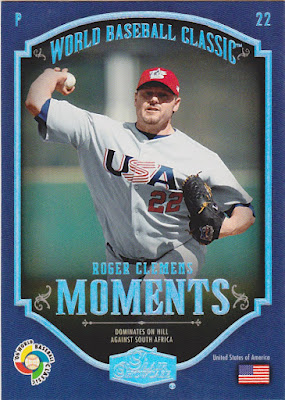 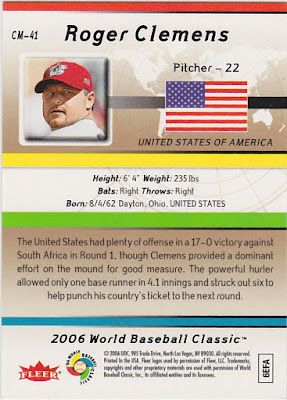 The other day I saw Roger Clemens pop up in a TV spot that urges Houston area sports fans to lobby their TV provider to add the Houston Comcast Astros/Rockets station. There's a whole lot of hype going on about the situation which I don't really understand/follow/give a rat's ass about. My provider (AT&T) doesn't carry it but I don't care. My son is pretty pissed. He's a Rockets and Astros fan and wants his games televised.

I say put 'em on PPV. If you want to watch the crappy Astros, pay for it. But that's neither here nor there. Let's talk about the Clemens card up top.

I saw a big ad in the USA Today announcing that the World Baseball Classic was cranking up. It's has never been something I followed. It's kind of like the basketball and hockey Olympics now that it's all professionals involved rather than the old days when it was our college and amateur guys versus Eastern Bloc pros. When we actually won (think Miracle on Ice) it was truly special. But that's cool because I know I'm in the minority.

Having said that I like the Clemens card based on it's visual appeal. While it is a little busy on the front I think the design works nicely. Heck, the lighter blue 'border' looks like the layout of the Polo Grounds. And I love that USA uni top Roger is rocking. The cap, not so much.

I'm going to assume that the picture is from the actual game that provided the 'Moment' and is described on the back. If it is, that makes the card even better.