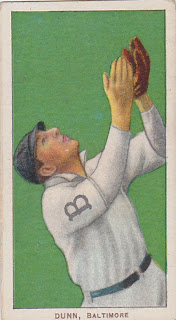 Jack Dunn played and managed in organized baseball from 1895 until his death at the age of 56 in 1928. Much of that time was spent as the owner and manager of the Baltimore Orioles of the Eastern and International Leagues. As a player he had some outstanding seasons as a pitcher for Brooklyn before the turn of the century. He transformed himself to a third baseman and outfielder in 1901 with the Orioles of the American League. He went on to play with the New York Giants and serve as player/manager of minor league Providence club before purchasing the Orioles in 1907. He won seven straight IL pennants beginning in 1919. His teams featured stars such as Babe Ruth, Lefty Grove, and Max Bishop. Dunn was an interesting guy and his SABR bio makes for great reading.

Looks like Jack is posing with his back to the infield trying to haul in a pop-up over his shoulder on the T206. It's part of my collection of the minor league Orioles included in this milestone set.
Posted by Commishbob at 7:30 AM