The Pause That Refreshes

Taking a quick break at the halfway mark of my 10 things posts. I finished off this page in my 1961 binder over the weekend when the Yogi card arrived. An interesting (to me) page. Lots of yellow/red name/team blocks here. With a bit of blue and an orange outlier thrown in. Also lots of star power here with Kaline and Maz in addition to Berra who is at Yankee Stadium as is Turk Lown.

Lown was nearing the end of an 11-year career, mostly as a reliever and it was one of his better ones. Dick Ellsworth had a handful of very good seasons in a rollercoaster career. This pic was used again for his 1962 card.

I had never really associated the Ray Barker in this set with the 'Buddy' Barker on the Yankees when I lived up there in the late 60s. Same guy. He had a long minor league career and had a short stint with the Orioles in 1960 before re-appearing with the Yanks later in the decade. My original copy was extremely miscut so I recently upgraded it to this one. 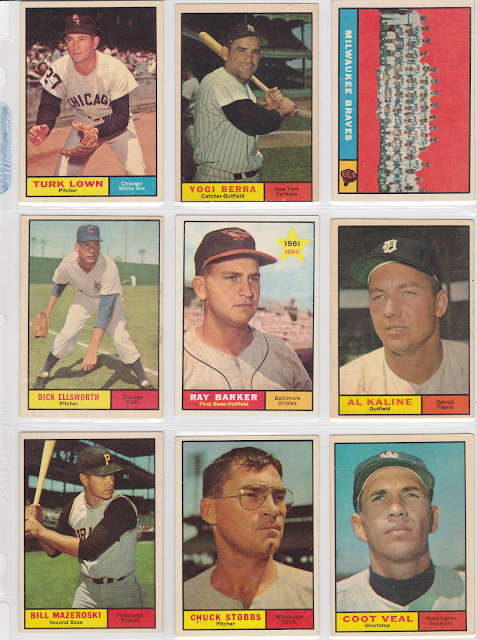 Looks like Maz was photographed in Wrigley. Stobbs as well (he was with the Cards in '58 so it's possible). Stobbs pitched 15 seasons, mostly for the Red Sox and Senators. Coot Veal's name was always worth a second look as a kid. His real name is Orville Inman Veal.


The Braves team card is in the spot it would have been had Topps not messed up and mis-numbered it. They gave it #426 on the checklist but the back has #463 as does Jack Fisher's card. Sticking it in the 'correct' slot was a simple solution for me. 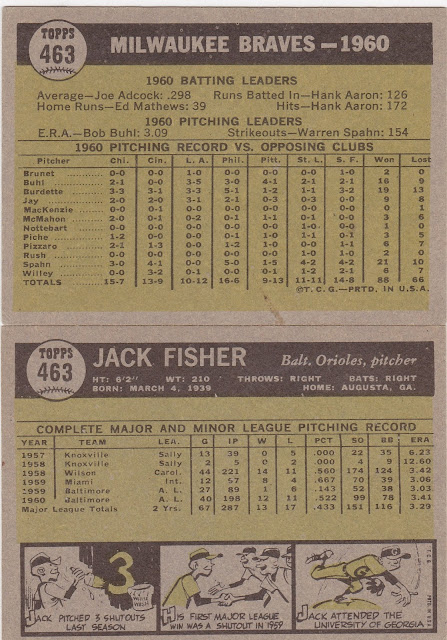 Those team card backs with pitchers W-L versus the other teams provided me with hours of entertainment. I'd wonder why Spahn could have such good results against the league but go 1-5 against the Pirates. Bob Buhl beat the Bucs four times but the rest of the staff could only win five? Then I'd probably remember that the Pirates won the pennant and I'd go look at the rest of the NL team cards I had to see how they fared against the champs. A great time to be a kid with your cards.
Posted by Commishbob at 11:34 AM