This one was a long time coming. I've queued up T-3s, 1910-11 Turkey Red cabinet cards for purchasing several times over the years and never pulled the trigger. I always found they were too expensive for one in nice condition, or in terrible shape for a price I was willing to pay. 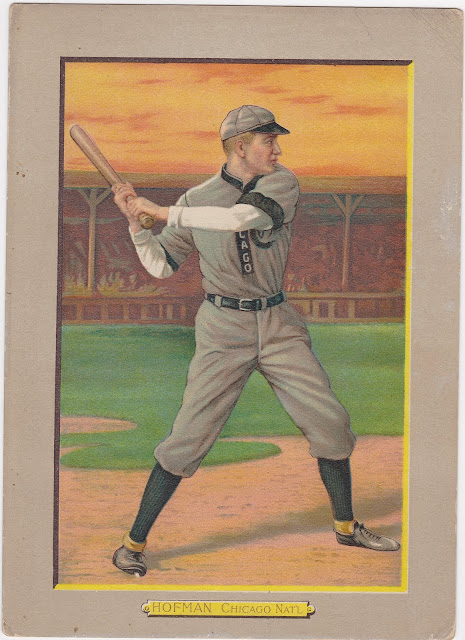 Meet Solly Hofman of the Cubs. Known as 'Circus Solly', he was a centerfielder and utilityman who played everywhere on the diamond except pitcher and catcher over the course of his career. His career covers all or part of 14 seasons and peaked in 1910. That year he hit .325 with 16 triples which were good for third in the NL in both categories.

In addition to his ten years with the Cubs, he had two brief tours in Pittsburgh, one with the Yankees and he also played for Brooklyn and Buffalo in the Federal League. He played in three World Series and hit .298 in them. His Cubs lost twice, in 1906 to the White Sox and in 1910 to the Athletics but in 1908 they got a title with a five-game Series win over the Tigers. They had beaten the Tigers in 1907 in five games but Hofman never got into a game. I'm assuming he was hurt at season's end because he was an everyday starter that year garnering 530+ plate appearances in 134 games.

BTW...there are two reasons given in his SABR bio for his nickname. One story attributes it to a cartoon character of the era while the other to Hofman's flashy centerfield skills. This little nugget was also on that page:

Before the 1908 World's Series, [manager Frank] Chance forbade Hofman's wedding to Miss Rae Looker and demanded "for the good of the team" that the ceremony be postponed until after the season. The Cubs won their second consecutive World Series in Detroit on October 14, 1908, and the Hofmans did not dally. They were married the next day in Chicago.

As for the card...well, it's a beauty for sure. I love the color and the background. The Net54 seller had several of these for about the same price and I zeroed in on this one. It had the best front by far. There is a crease in the upper right corner which is hard to see in the scan and barely visible even in hand. It shows up in the scan of the back but the back had other issues. That is if you let the marks made by a kid in 1911 become an issue. They don't phase me in the least. 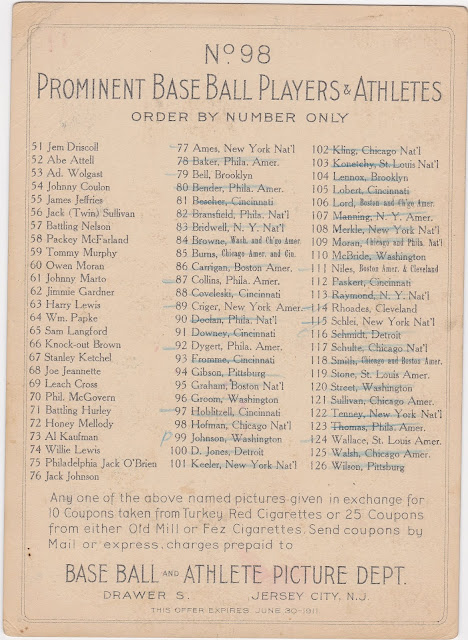 The checklist shows that cards 51 thru 76 were boxers including the wonderfully named Knock-out Brown at #66. Card #80, Charles Bender, is one card I'd love to have. But I doubt I'll ever find one I could fit into my hobby budget.  You can look deeper into T3s on the Oldcardboard site.

I recently pulled Lawrence Ritter's The Glory Of Their Times down off the shelf again. It's one of the few books I've kept since I originally received my copy about five decades ago. I signed up for both a record club and book club through magazine ads when I was in high school. I stayed in both for a few years until I decided I could spend my money in other ways. 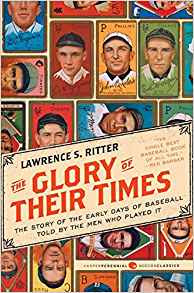 Ritter's book was my introduction to players from the early days of baseball. It's now considered a classic and for good reason. Ritter's interviews with baseball legends are timeless. When I skimmed it last week I remembered why I enjoyed it so much back in 1969. It's currently cued up for a re-read.

I don't know how many people are familiar with Rodriguez, the Detroit native singer/songwriter who struggled mightily here at home but became the biggest music sensation in South Africa (and New Zealand) in the mid 70s. Ironically he had no idea of the fame and fandom he had garnered due to the oppressive South African government's tight lid on media and culture.

The 2012 documentary Searching for Sugarman tells the amazing story of his re-discovery in the 90s by a nation that had never seen him despite his fame and, in fact, had believed he had commited suicide decades before. Highly, highly reccommended.

This clip shows the opening of his first live performance in front of a South African audiance and it's pretty crazy.


His whole story is carzy atually. While he was a sensation overseas he was dropping out of the Detroit music scene, getting a degree at Wayne State University, dabbling in local politics and eeking out a living at various low paying jobs. He never saw a residual check and later decided not to pursue those who cheated him out of his wealth. The Rodriguez story truely is stranger than fiction.

My wife and I have seen his in concert a few times. He's now in his 70s and has almost no sight and the last show we saw was a bit rough around the edges. But he's still got that unique voice.

Even better than the movie clip is this segment from his David Letterman debut in 2012. Give it a listen:

Bonus content: Here's the video of the song he tries to play in that South African concert: