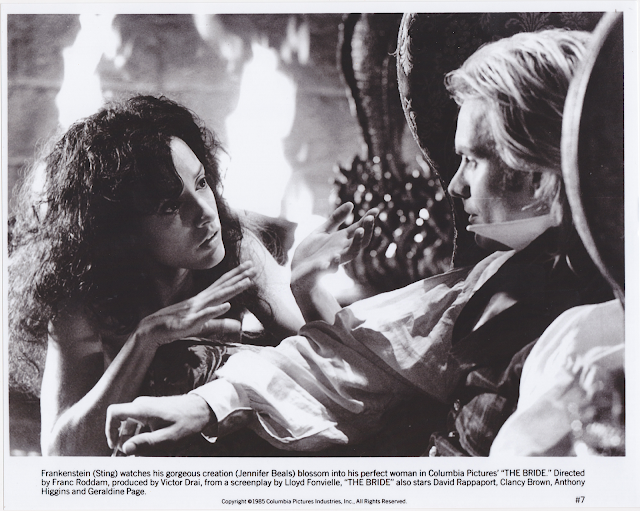 See, I told you they wouldn't all be cards. What we have here is the latest addition to my modest Jennifer Beals collection. I have a serious crush on Ms. Beals and have for a long time. I first saw her in 1983's Flashdance which I watched when it opened because my friend, Robert Wuhl had a one-line, very brief, moment of screen time in one of the club scenes. I won't debate the quality of Flashdance but I came away with an appreciation for Ms. Beals. (And, yes, I know she had a double for much of the dancing) As attractive as I found her then, she is one of those women who has gotten even more beautiful with age.

That photo is a promotional piece for The Bride, which I have never seen despite Beals' role. It just looked unwatchable. But it did also star one of my favorite musical performers, Sting.  I don't have much in my Beals collection....a few movie stills, a weird French poster/card that I showed here way back when, and a commemorative Flashdance DVD that came packed in a 'leg warmer sleeve'. I kid you not. 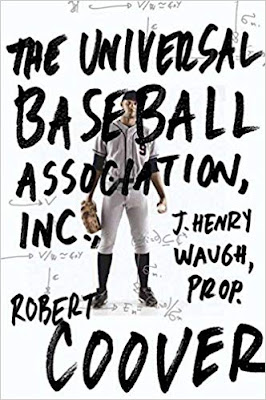 I wrote about this book (which I read for at least the third time last summer) on my 1959 Topps blog when I did some 'suggested reading' posts. Here's what I said then:


The Universal Baseball Association, Inc., J. Henry Waugh, Prop. by Robert Coover is the most unique book on my shelf.
Coover's book centers around J. Henry Waugh, an accountant who in his spare time, has built a fictitious baseball league the schedule of which he plays out using a dice based baseball game he devised. That's a little like saying "Hoover Dam holds back water".... it doesn't begin to describe the real treasure that this dark story is.

Waugh's league has 59 years of history, generations of players, league politics, feuds and rivalries. All of which has been chronicled in meticulous detail by the ever more obsessed Henry Waugh. Little by little the league has consumed Waugh and taken over his life (and the narration of the book after awhile).

Coover tells a great story and though his works contain no other baseball related books he has an obvious knowledge of the game and it's nuances. This is quite a ride. I had wanted to read this one for quite awhile and finally grabbed a copy a couple of seasons ago. I played quite a bit of Strat-O-Matic baseball as a kid and I was expecting a story of a guy obsessed with dice baseball. It's obviously much more than that and had me hooked from the start.


I mentioned Sting above and the fact that he's one of my favorite performers. I've seen him many times in concert, both as a member of The Police and on his own. My wife and I saw his Houston show when he toured alongside Paul Simon a few years ago. I paid with blood to get seats in the second row and it was worth every dime. They sang together, singularly, sang their own stuff and each other's. A memorable night for sure.

Desert Rose, from his Brand New Day LP, is among my favorite Sting songs. It features a guest appearance by Algerian singer Cheb Mami, a not-so-great guy with a remarkable voice.