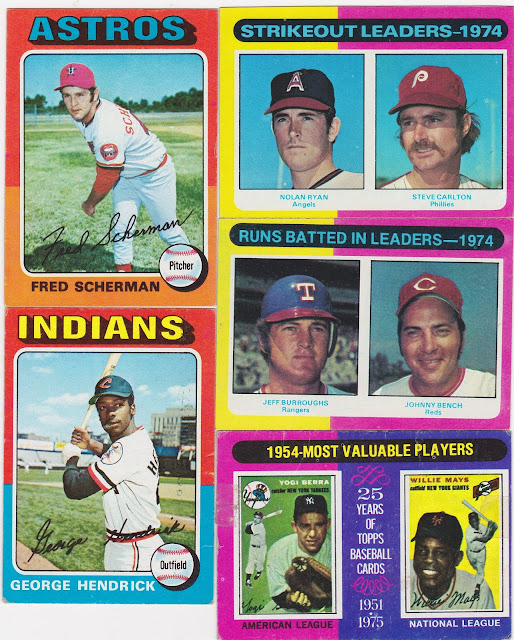 These are five of the 1975 Topps cards that Steve from the 1975 Baseball Cards blog sent me recently.  Steve also tinkers with a blog that features athletes on phones and I flipped out when I found it. One of my first collections, when I re-entered the hobby in the late 80s, was of guys in all sports on the phone and with other electronic devices. I actually did a 'Guys On The Phone' post way back in 2012. When I saw Steve's blog I dug out the old pages I'd filled and sent him some of the cards (I've since found more and should send them his way, too).

Anyway, these colorful 1975 gems are most welcome. I'm down to less than two dozen needed for the set. I should do some damage to my want list at the TriStar show in February. My 1976 chase is winding down, too. Just about 40 needed there. I'm not sure how I got the bug that has sent me after the 70s sets. I followed baseball thru that decade (as best I could) but didn't collect much. I remember that I would buy a pack of cards just to see what Topps was doing.

I'm probably going to try to finish all the 70s sets at some point. My scorecard looks like this at the moment:

Truth be told the 70s was sort of a 'lost' decade for me. I was in and out of college, held down numerous jobs to feed my habits, and wrecked some relationships and friendships. Not all of them, I did meet my wife during this time, but enough. 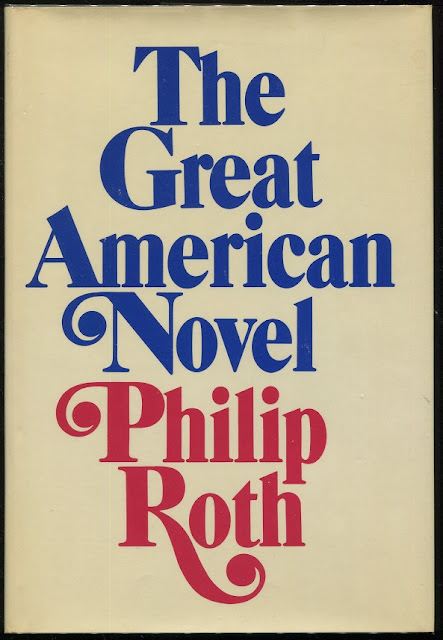 Phillip Roth's 1973 novel is just outstanding. I wasn't much of a fiction reader when I was in college but I read this on a recommendation and I've always been glad I did. I posted this on my1959 Topps blog in 2011.

I had tried to read one or two of Philip Roth's books prior to The Great American Novel. The key word being 'tried'. I never got very far. So I was pretty skeptical when a friend gave me his copy of this book and insisted I read it. Turns out to be the funniest, cleverest and most entertaining baseball novel I've ever read.

In it Roth chronicles the odyssey of the Ruppert Mundys, the only homeless franchise in the Patriot League. If you are not familiar with the Patriot League take heart, Word Smith, the book's narrator will explain the Communist plot and Capitalist scandals have conspired to wipe out it's rich history. It's enough to know that the Mundys have lost their stadium in Port Ruppert to the war effort (WWII) and have taken to the road more or less permanently.

The book is difficult to describe with murderous plots against umpires, wooden-legged catchers, games scheduled against teams from asylums and players named for mythological figures (Luke Gofannon, Gil Gamesh, etc).


The book slows in spots but will keep you laughing and wondering at the depth of Roth's imagination. Highly recommended.

One additional note...this is the only book I've ever bought after having read it.


Music in the 70s was something I clung to in stressful times and I will always consider it the best decade for music. I had access to lots of concerts through my jobs on the campus and through my job at the Houston Post. 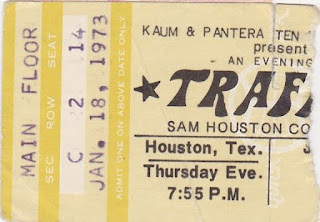 The ticket is one I posted previously when I blogged about some of the shows I saw back then. I had pretty good seats for Traffic at the rickety old Sam Houston Coliseum back in '73. I loved this group and it's one of the concerts I remember attending (not always the case).

Want to hear my kind of rock? The music I still fall back to? Give Traffic's greatest song a listen,