Got home Monday night and found that I had this '61 Clemente waiting for me. 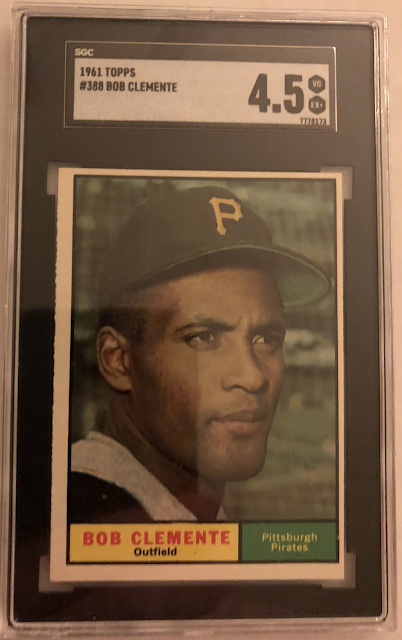 Since I had my needle-nose pliers and screwdriver still on my workbench from the morning's operations I figured I'd crack open this one quickly. The damned case never even made it into my house. Here is the result... 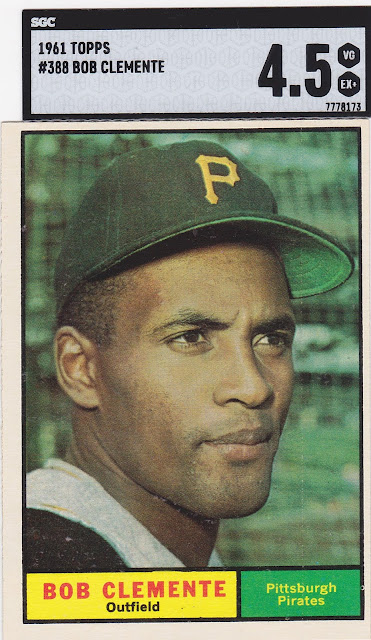 This is one of my favorite Clemente cards. Love a well-done portrait and this certainly qualifies. I've heard the stories about Topps (and writers, and Bob Prince) referring to him as 'Bob' and how he hated it but those may be apocryphal. Whatever the case, he was 'Bob' on this one.

One of the great sports-related blessings of my life is that I got to see Clemente play. He truly was electric. I've related the Bob Moose no-hitter story previously but I thought about it again recently when no-hitters came up on Twitter. Moose shut down the Mets in Shea Stadium late in the 1969 season and that's the only no-hitter I've witnessed in person.  Clemente's athleticism saved the glory for Moose with a great catch of Wayne Garrett's drive in the sixth. I found this on the SABR page dedicated to Moose's gem:

After pinch-hitter Jim Gosger struck out and Tommie Agee grounded to second, Wayne Garrett connected for the Mets’ first and only hard-hit ball. “When he hit the ball,” admitted Moose, “I thought it was gone, but then I saw the wind hold it up. I knew that if anybody could catch it, Roberto would.” Clemente raced to the warning track and made what (NY sportswriter Leonard) Koppett described as a “leaping catch” against the right-field wall to preserve the no-hitter.

I even found a grainy photo of Clemente against the fence after making the catch taken from a newscast shown on NY television years layer. It's funny the tricks that your mind will play. I've always remembered it as Clemente ending up in foul territory after a running catch. Obviously not so. 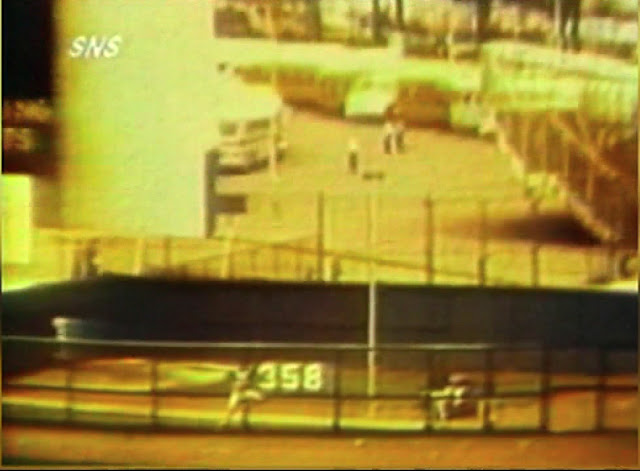 He also made the greatest throw I've ever seen in person in the first game I watched in the Astrodome way back in the summer of 1967 but that story will wait for another time.

Meanwhile, I'm one star card closer to finishing this 1961 set. I did some COMC shopping today and also got a message that someone on Net54 is generously sending me some mid-series 61's which now puts me 'just' 40 cards short.

EDIT: As I was slipping this into the binder late last night I saw that it completes a rather nice page: 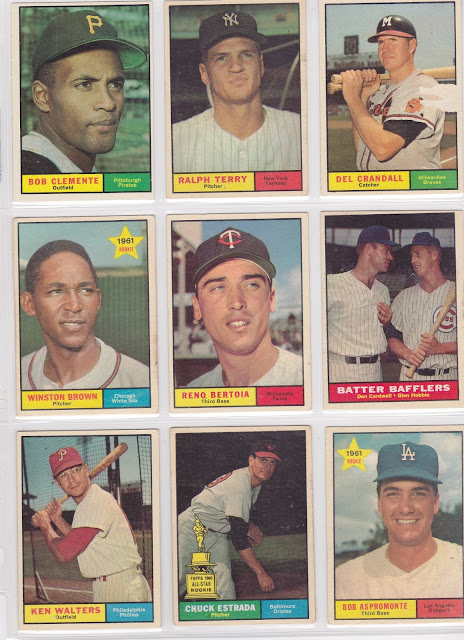 In addition to Clemente, we see Ralph Terry who I saw pitch frequently for the Yanks and (ironically) was the Game 7 (and Game 4) loser in the 1960 World Series to Clemente's Bucs. There are no less than three rookie-award emblazoned cards. Bob Aspromonte and Winston Brown (who's capless photo and non-existent big league career drag down the whole thing) warranted stars but my man Chuck Estrada got that beauty of a card featuring the Top Hat trophy! Also seen is a nice shot of Ken Walters at Connie Mack, Reno Bertoia in one of the first cards depicting a Twin as a Twin, and Don Caldwell and Glen Hobbie on a Cubs special. Interesting that Topps recycled the 'Batter Bafflers' thing from a 1959 card featuring two equally middle-of-the-road Red Sox hurlers.

Finally, in the upper right slot is a sweet (but damaged) card of frequent NL All-Star Del Crandall. Somehow Del fell off my 'upgrade this' list that I took to the hotel card show on Saturday. I'm sure I saw a copy in Daryll's vintage boxes. Next time!