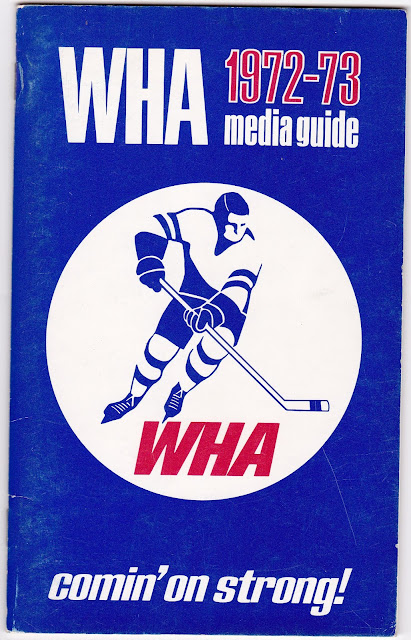 A week or so ago I posted my Houston Aeros Media Guide collection. I was inspired to poke around eBay looking for Aeros/WHA items and this guide from the league's first season popped up. I made an offer and landed it. Makes for a nice companion piece to my Aeros run. 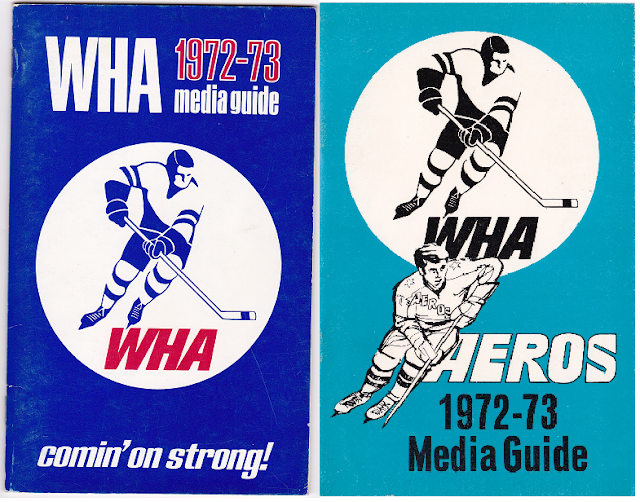 In a comment on that post, Joe Shlabotnik mentioned the lack of the city name on the Aeros first guide. Given that they were originally bound tor Dayton it's quite possible that things were kind of hurriedly thrown together. Obviously the Aeros 'cribbed' the league's logo for the cover. No other team (as far as I could find) did the same. They all used original artwork or photos.

This guide is pretty simple. Most of it is taken up with team pages consisting of a roster and a directory with a short write-up. Here is the contents page... 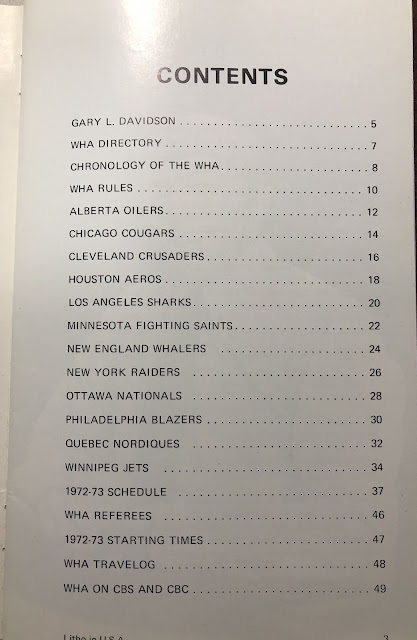 And we get a big dose of the WHA's 'godfather', Gary Davidson. He knew about as your pet turtle does about hockey. 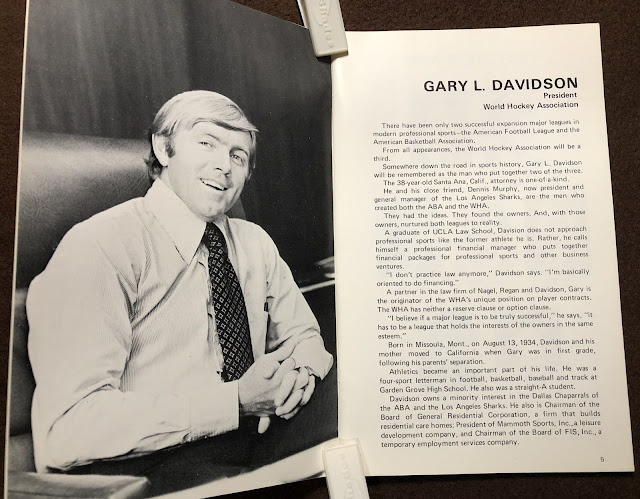 A page of flunkies. The guy on the bottom left looks like an extra from the set of 'Moscow On The Hudson'. 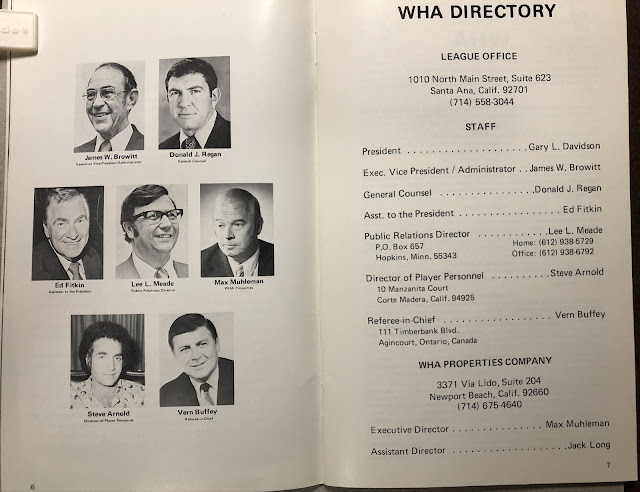 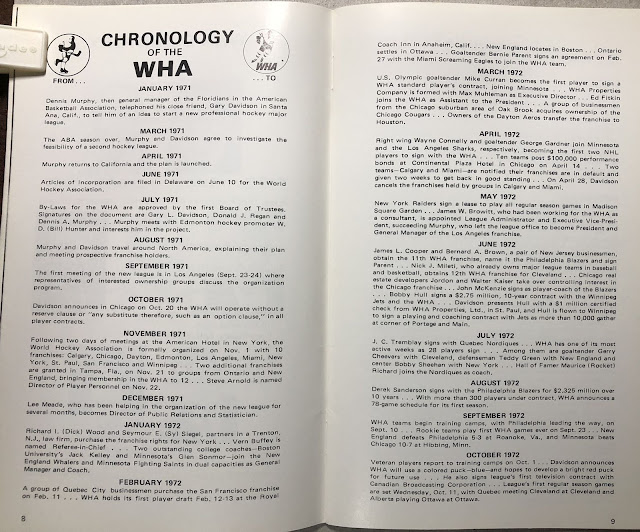 Well over a year into the process the Aeros move from Dayton to Houston. That's about six months prior to training camp.


The rules page is the most interesting thing here. The WHA, like so many startups since, tried to be innovative. Overtime, shootouts, less restrictive passing and icing rules were part of it. They also made a big issue of being less punitive on guys who jumped into fights (Third Man Rule) and the sticks had a much bigger curve allowance. The page even mentions Bobby Hull and how his curved stick had been dialed back in the NHL. 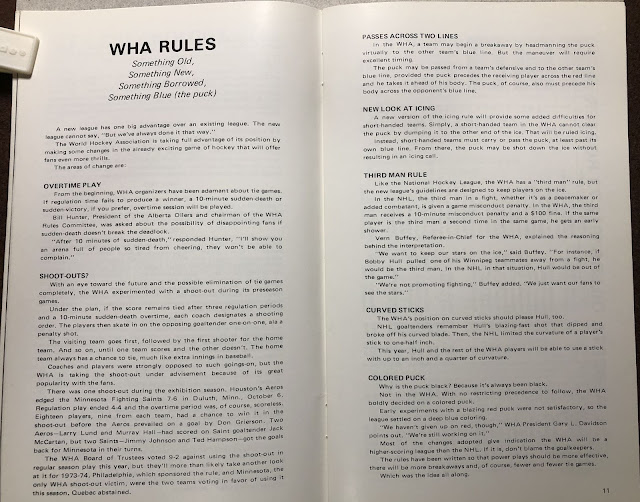 What surprised me, though, was the last section which mentions 'colored' pucks. They acknowledge the failed experiment of red ones but trumpet the use of blue pucks.

All this was news to me. I kind of followed the league pretty closely but I have no memory of any of that. There are a few listed on eBay but the color doesn't really come across as blue. EDIT: As I re-read this it occurs to me that I have an Aeros puck, supposedly official and from the '75-'76 season, on a shelf behind me. It's black as coal.


Every team got the double page roster/team info page. The non-players are all listed as well as broadcasting info. Below that is a blurb about the city itself. 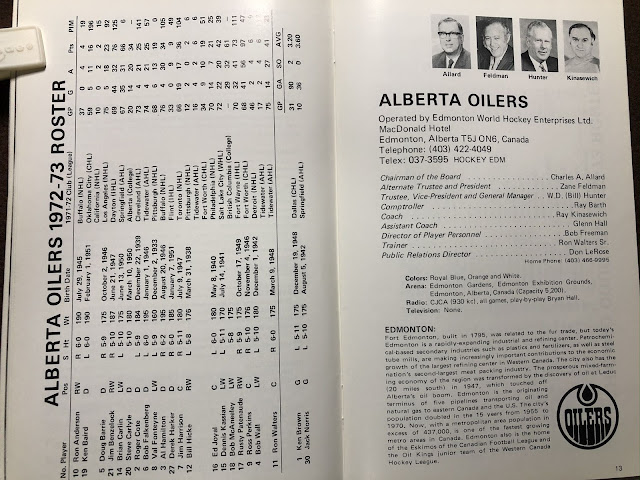 Here is my crew, the '72-'73 Aeros. It looks like a skeleton crew was running the club. They were probably still hiring when this book was put together. 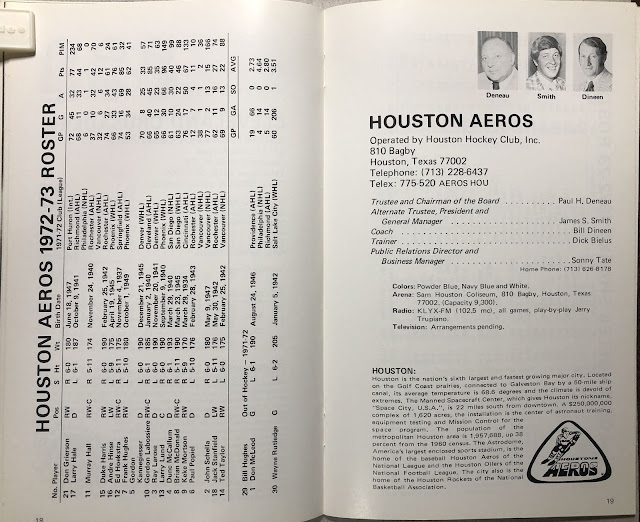 The Squad. At the time I think I had some familiarity with maybe two players from their NHL careers, Dunc McCallum and Paul Popiel. For this former pond hockey goalie Don 'Smokie' McLeod quickly became a favorite. 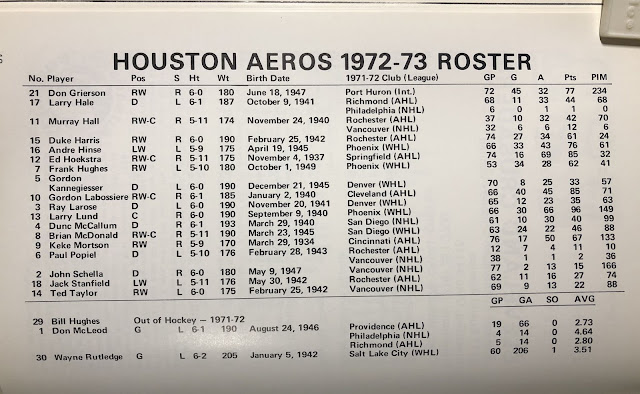 There's your five-man front office. Four if you don't count the owner. 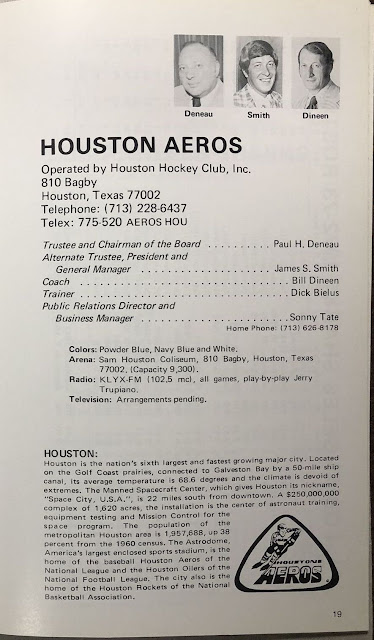 Yes, they may have been in a hurry but..."Golf Coast"?... "baseball Houston Aeros"? Yup, I realize the irony of me, Mr. Typo, picking on a few mistakes, but this was a pro team. 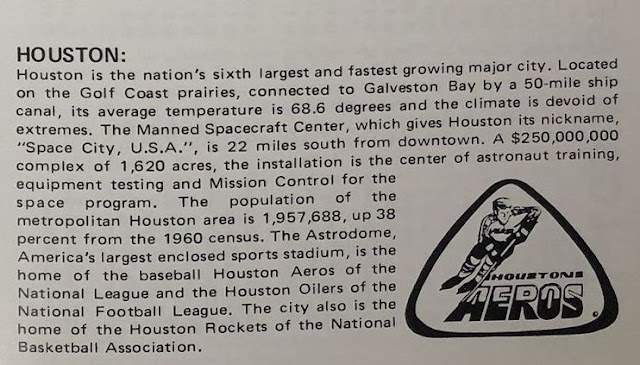 The Raiders had an old friend from the Rangers, Camille Henry as head coach. He'd been retired a year and had spent it coaching in the Central League at Kansas City. But the reason I show this is that there are two other familiar names listed. Herb Elk, the Raiders' PR Director and Assistant GM later came to Houston to work with the Astros. I got to know him through working at the Houston Post. He was a huge, jolly man. He died before he was 50. 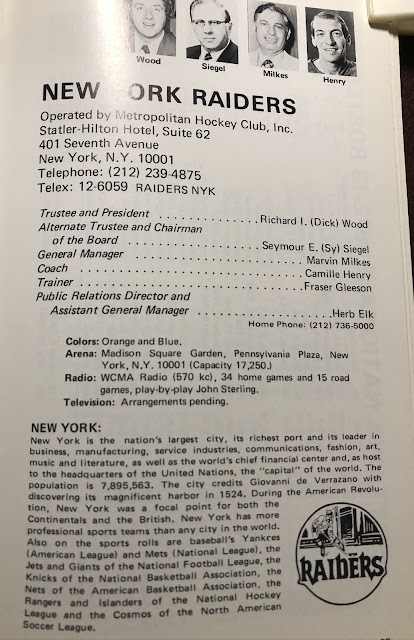 Then there is a filler page with the team logos. And a complete league schedule. 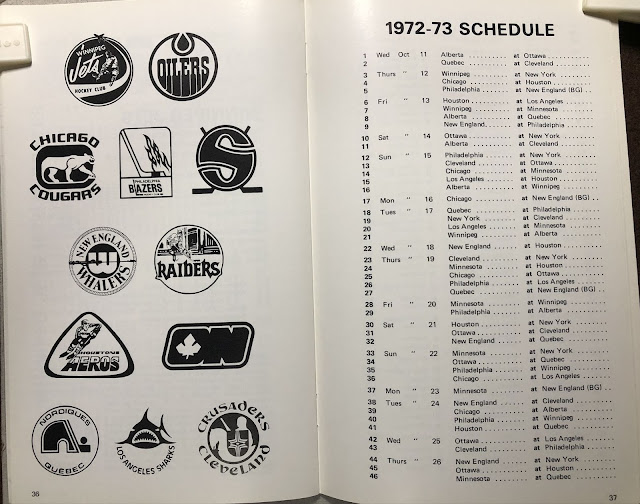 The WHA refs were listed. I hadn't realized how many of them had come over from the NHL. Bill Friday was a very well known name back then. According to Wikipedia, he is the only referee to work both the Avco Cup finals in the World Hockey Association and the Stanley Cup finals in the National Hockey League. There are about six other names I know. 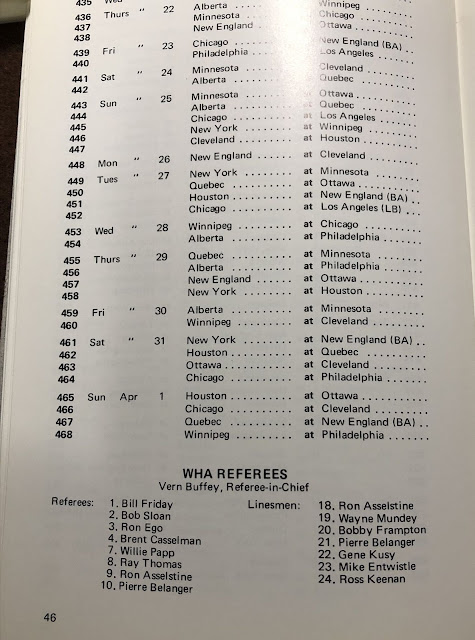 Then comes another throwaway page, league-wide start times. I guess those would be useful if you actually were a member of the media. 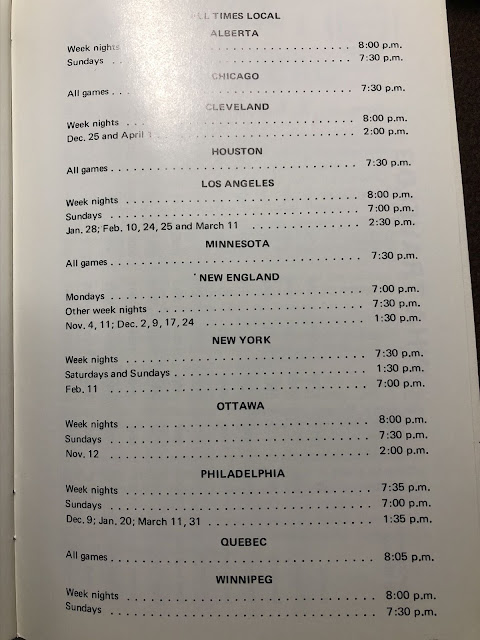 The back cover had an ad for the now-defunct Host Rent-A-Car. 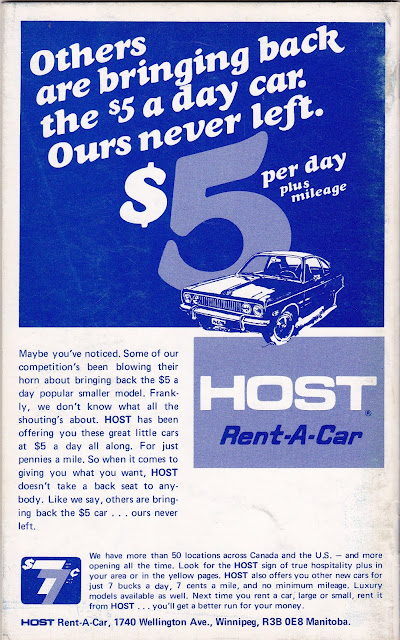 The WHA produced league-wide guides in later seasons but I didn't find all of them with a quick eBay search. It doesn't matter since I won't be chasing any others down. Having the first year guide is kind of fun, though.

Speaking of the WHA... I am just about to crack the spine on this book... 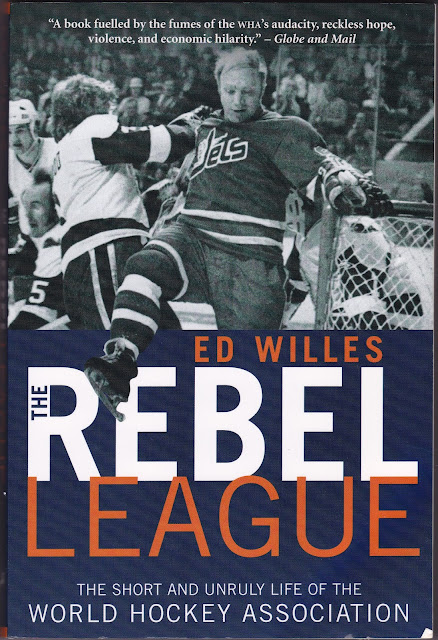 I've wanted to read it for a while and I'm finally finding the time. Hopefully, it'll have some laughs and some memories. I'll be particularly interested in reading about the Howe Family signings and the sad end of the Aeros franchise. I may do a book report! 👨
Posted by Commishbob at 10:29 PM