A few years ago I was at the regular hotel card show buying a stack of cards for a set I was building at the time. As I was paying, the dealer, one of the few who has stuff worth looking at, handed me a paper sack. It was one of those in which you'd tote a school lunch. He said he'd bought a collection earlier in the day, and he had no use for the bag's contents so it became his 'gift' to me.

I peeked inside and saw an unruly jumble of Cardinal cards that I didn't recognize. I stuck it in my backpack and forgot about it until I was going back to the next show. Turns out that the cards were TCMA near-sets from 1974 and '75.

The first is the oddly interesting Gashouse Gang set of 31 cards issued in 1974. As with many TCMA issues, figuring out just what you have can be challenging. There are 26 different players represented. These are narrower than standard-sized modern cards, though just as tall.

Here are a few of the individual player cards. I say 'player', but player/manager Frankie Frisch and a coach or two are also in there. 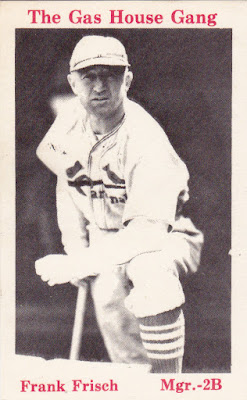 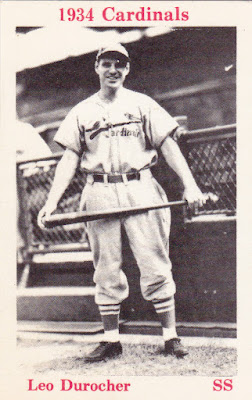 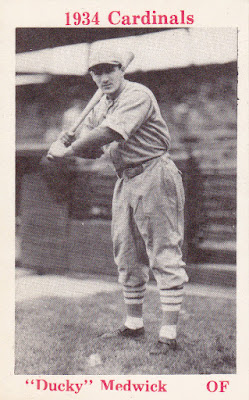 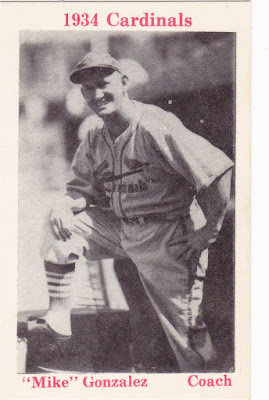 This illustrates how they differ in size from standard cards:

Ernie Orsatti has two different poses, a portrait and a full-length shot of him with a bat. 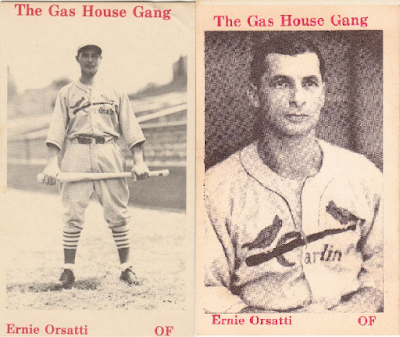 There is also a card of the Dean brothers, Dizzy and Daffy. That brings us to 27 plus the Orsatti variation. 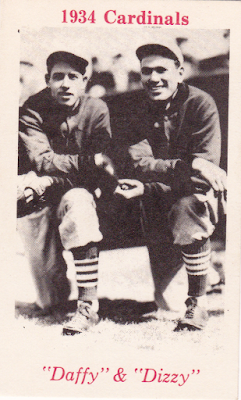 The backs of these have nominal stats for most players, a blurb for the coaches, and a notation of games played with other teams in 1934. 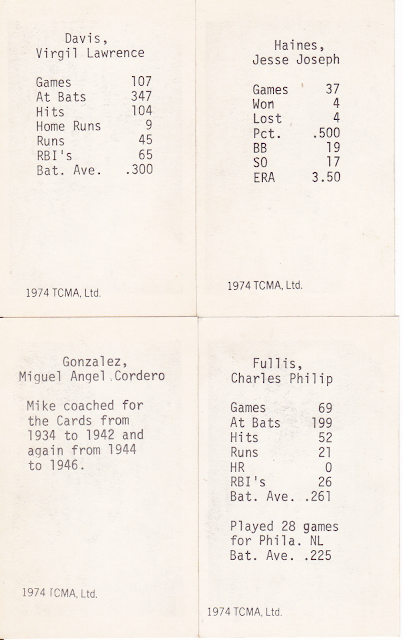 There are also four over-sized cards. These clock in at 3.5" x 4.5" and feature action from the '34 World Series, and one showing Dizzy Dean and Leo Durocher celebrating the title. 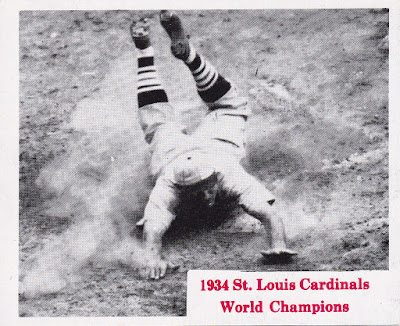 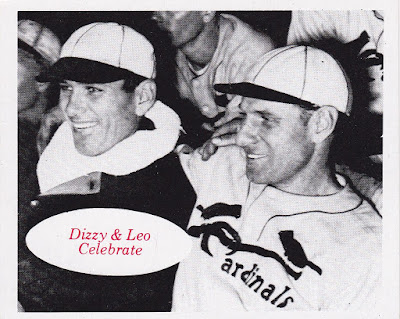 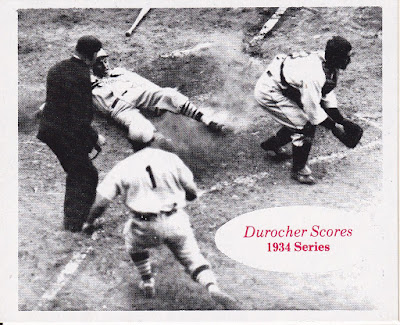 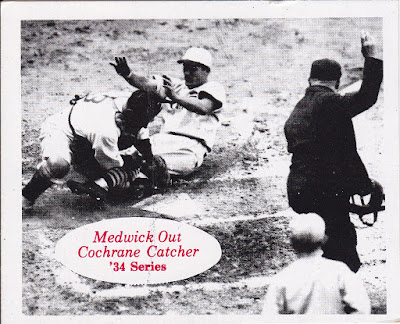 Here is the back of the oversized Dizzy and Leo photo card: 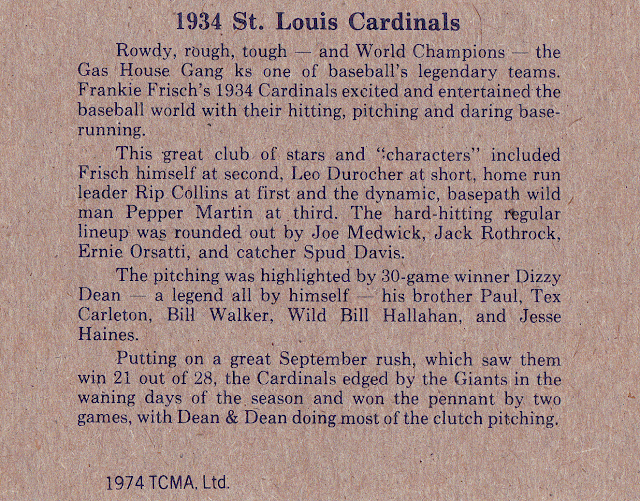 Oh, the backs are darker you say? Hold that thought, because, as with a lot of things TCMA, stuff gets a bit complicated.

You may have noticed that some cards have '1934 Cardinals' at the top, others show 'The Gashouse Gang'. I haven't seen both versions for every card, but I saw enough in my travels down eBay and COMC rabbit holes to be fairly confident that the whole bunch comes in both versions. 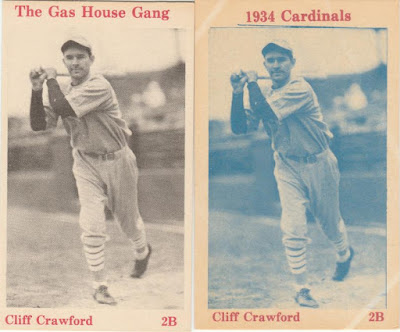 The cards (all? some?) also have blue tint versions.

And then there's this: 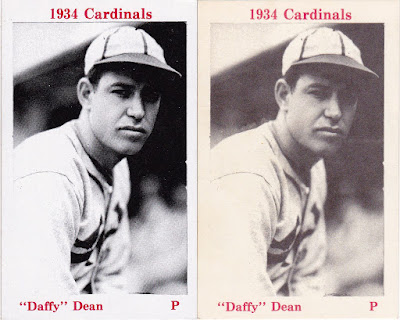 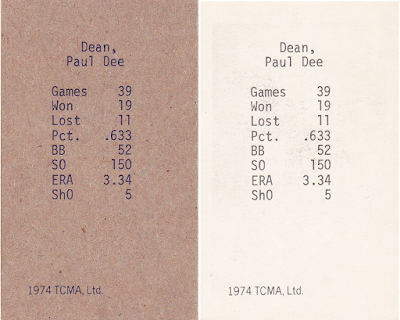 I mistakenly picked up a second Daffy Dean card. When it arrived it was obviously printed on brighter paper. And the back, like those of the oversized cards, was on darker cardboard. The Trading Card Database calls these 'graybacks' but the checklist is identical. Were these reprinted by TCMA? Did someone go to the trouble to 'counterfeit' these? Surely not.

I may need to consult Twitter acquaintance Andrew Aronstein, son of the company's founder, Micheal Aronstein, to help me sort it all out.

Running down the checklist I found on the Trading Card Database told me I needed four cards. I was able to find them without too much hassle on SportsLots and COMC. Then, when I became aware of the multiple version fun, I decided that one of each player (and the two Orsatti poses) would be plenty for me. I went ahead and picked up a blue tint or two just as examples.

Once COMC starts shipping again I'll have everything in hand. Then I'll turn to the other TCMA Cardinals set which was in the paper sack. That's the 1942-46 Cardinals set...it has 'red jersey Cardinals' variations. Oy vey.
Posted by Commishbob at 10:20 PM