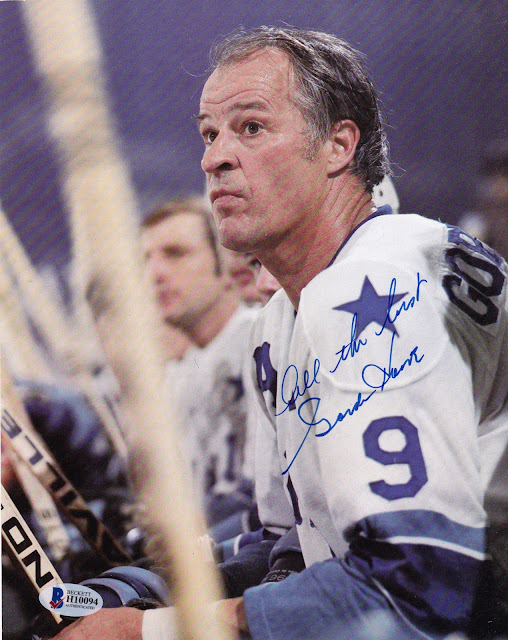 In a normal year, we'd be near the end of the second round of the NHL playoffs right about now.  Things would really be getting good. I'm fairly certain my Rangers would have missed out on the post-season (give us a year though!) but that has never stopped me from enjoying the Stanley Cup trek. I watch hockey, especially playoff hockey, no matter who is involved.

I spent a few days late last year sorting and cataloging my Aeros cards and assorted ephemera. Being a fan of media guides and programs I dug through boxes to see what I had kept. I found that I had five of the six guides. I found the missing guide on eBay and it's on its way now. now in hand!

I also found that my Gordie Howe poster, which he had signed at a promotional event, was missing. Who knows where it went after all these years. So I sought out and grabbed this signed photo. Gordie was the Bob Feller of hockey. He signed relentlessly over the years. He was Mr. Hockey and is still the greatest player I've ever seen. The photo didn't scan very well but you'll have to trust me that it's a beauty.

1972 was the Aeros first season. A lot of my buddies at the University of Houston came from hockey hotbeds, and we hopped on the bandwagon early. One of our group worked in the fledgling ticket office, so we got plenty of passes. 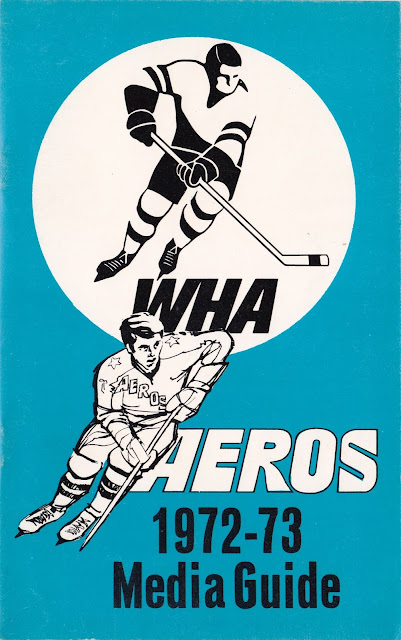 These programs are kind of fragile and I don't want to flatten them on the scanner so all I can show is front covers and a few backs. I also snapped a few pics which I'll sprinkle in. The Aeros' story is an interesting one. They were supposed to be the Dayton Aeros but lack of a suitable arena sent their ownership on a hunt for a good home and luckily they landed here.

The guide is, as you might expect, not very thick, just a dozen pages or so. Front office & coaching staff listings and brief player bios. A roster in the centerfold. Not even a schedule. 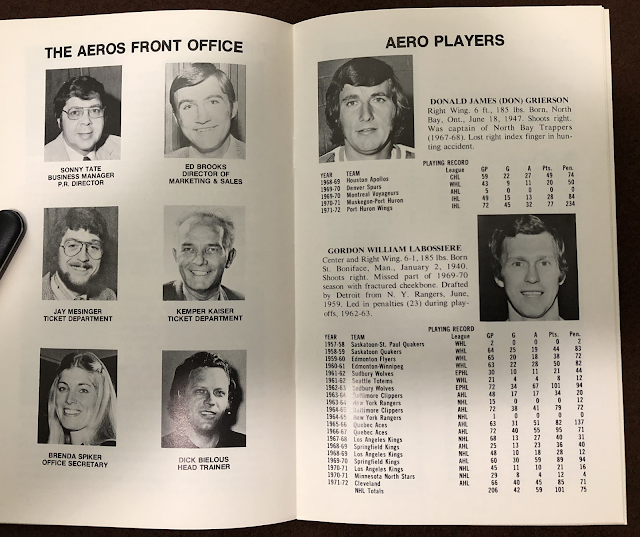 The back of the cover has the logos of the original WHA teams. 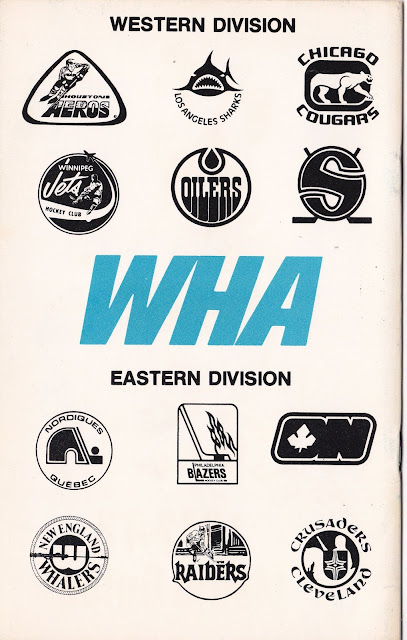 One of the things that attracted us (or maybe just me) to the WHA was the fact that some old NHL players had gotten second leases on their careers. Old school favorites like Harry Howell and old school enemies like Teddy Green and Norm Ferguson were part of it. Not to mention Bobby Hull.

For their guide the Aeros had a bit more to work with in 73-74 since there was a season under everyone's belts. I'm a bit surprised that there is no mention of the previous (inaugural) season since it had been pretty successful The Aeros had finished second in their division and won the opening playoff round before losing in the semi-finals.

The cover did the obvious, trumpeting the arrival of the Howe family. 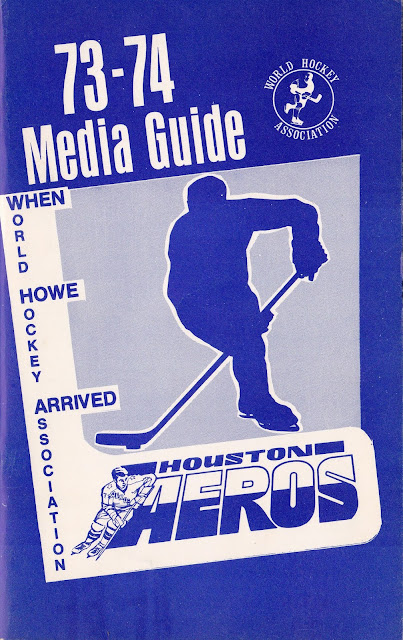 That's my friend, Mike, on the left in the middle row on this page. 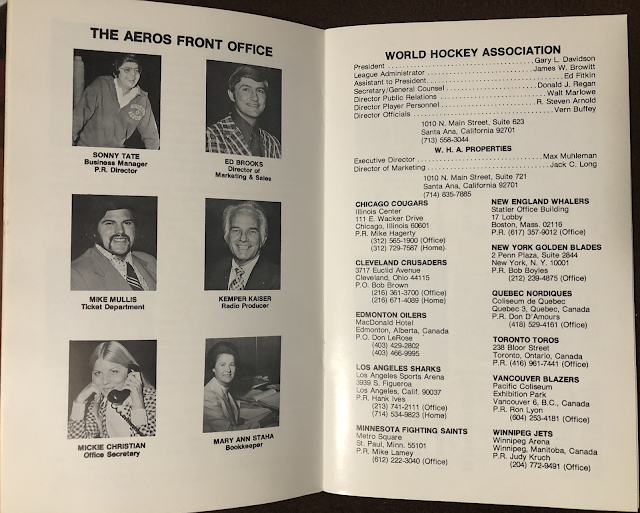 I used my letter opener to hold the pages open for pics. Interestingly Gordie didn't get a full career stat rundown like everyone else. Maybe they were afraid of running out of ink, or space, or both.

It was certainly huge news here in Houston when he signed to come along with his two boys. There were a few lawsuits as I recall as well. I think the NHL was trying to block the younger Howes from playing. They were underage junior hockey players or some such thing. 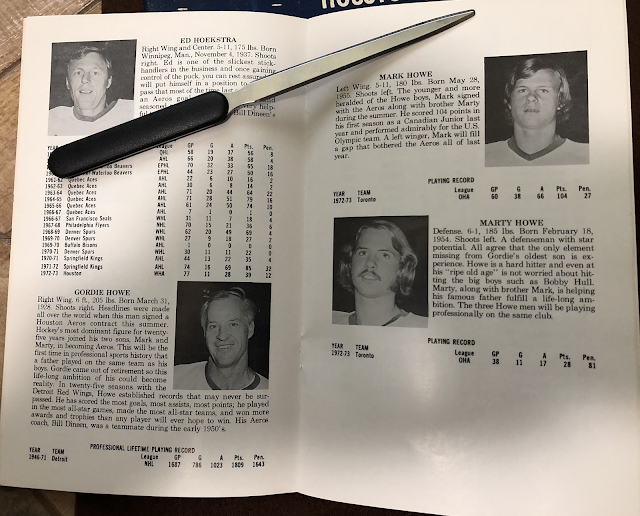 But the Howes sparked the Aeros to the first of their back-to-back WHA titles. The 74-75 guide showed off the trophy, the AVCO World Cup. We are somewhere in that crowd. The clinching game is one I'll never forget as the Aeros kept getting power plays and kept converting. A crazy night. 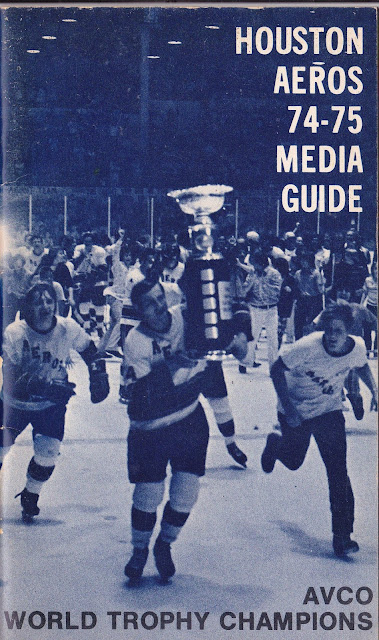 Here's my AVCO Cup story as I posted years ago....

[...]WHA story... It occurred the day after the Aeros won their first AVCO Cup. A good friend who worked at a department store that had a tie-in with the team was headed into work when he spotted the AVCO Cup trophy sitting all by itself on the loading dock. Just sitting there apparently after being delivered by the team for a promo. No one was paying any attention to it as it sat just feet from the morning downtown workers hustling by. Hard to imagine the Stanley Cup in that spot.


This time Gordie got a write-up, bio/vitals, and all the stats.  This was the first really substantial guide they issued, probably due to their recent success. Players get full-page bios, there are all manner of stats, some game action pictures, and playoff summaries. Pinocchio, you're a real boy now! 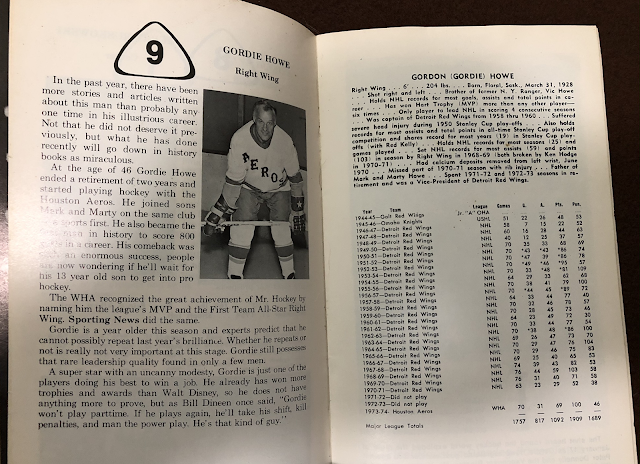 Another title brought another artistic rendering of the Cup being skated. The Aeros had dominated the playoffs, winning twelve games with only a single loss that came in the first round (to Cleveland and Gerry Cheevers). 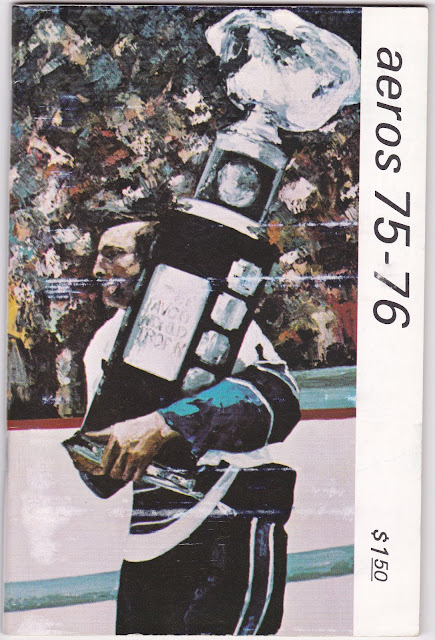 With the good times came a really professional media guide. Not only were there write-ups for everyone in the franchise but the stats were extensive. They had pages for opposing teams, on-ice officials rosters, tons of team records and stats for the Aeros, and more. 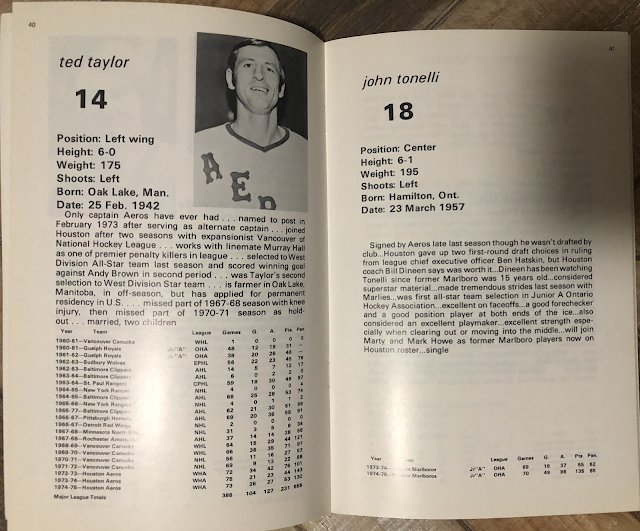 The Fighting Saints were the Aeros big rivals, at least as far as we were concerned. Of course, the WHA being the goofy, fly-by-night outfit they were most of the time, had a second Minnesota Fighting Saints franchise in 1976. That team had previously been the Cleveland Crusaders.

Here is another story I related in a previous post: 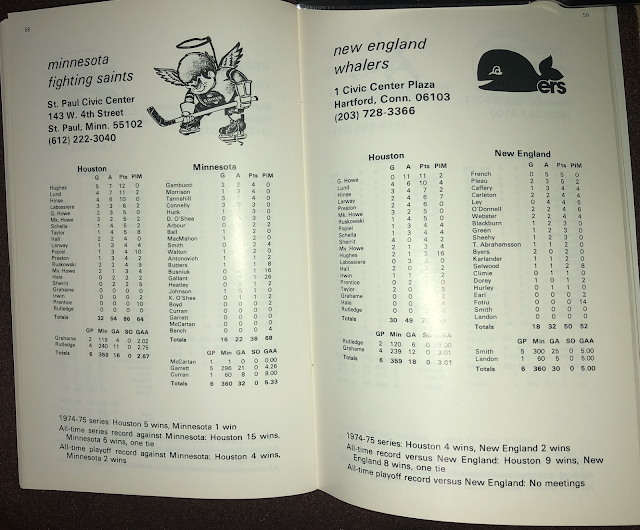 No 'Cup skate' to show in 1976 since the Aeros had lost in the finals to Bobby Hull and the Winnipeg Jets. They used the same artist to put Gordie on the cover. By now the team had joined the Rockets in the shiny, new arena known as The Summit. The whole vibe of the games had changed. The Sam Houston Coliseum had been a dump, but it was OUR dump, and we missed it. 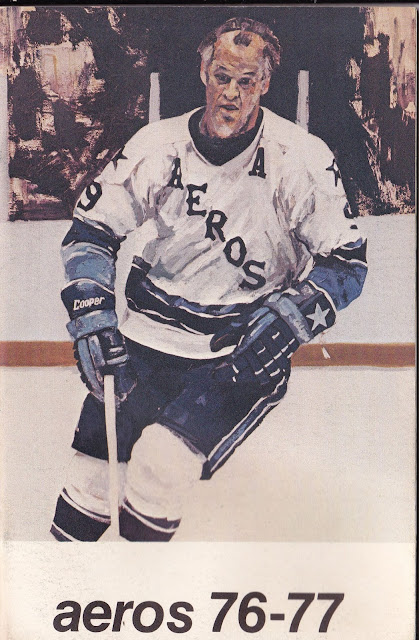 Gordie was now wearing two hats, President and Chief Thrower Of Elbows In The Corner. 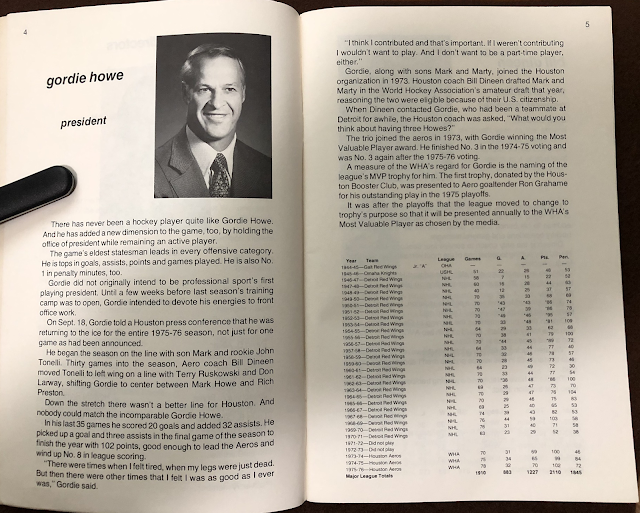 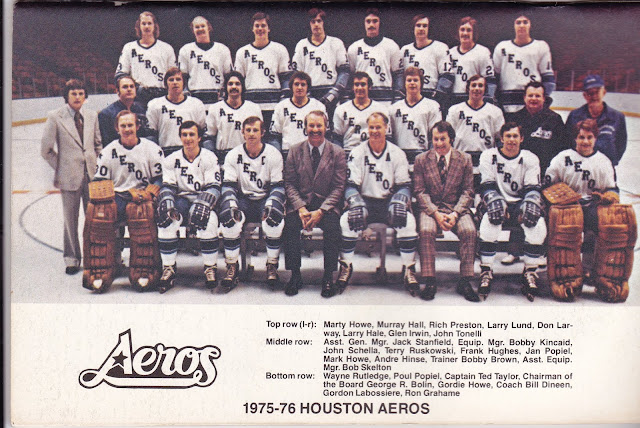 The Aeros were still a good team but not as good as they had been and early exits in the playoffs kind of reflected what was happening off the ice. The merger talks had everyone on a roller coaster. We fully expected to get into the NHL...at first. But the team had changed hand a few times and I suspect the folks in charge of the Aeros as the WHA started coming apart were more focused on the Rockets.

It became a day-by-day thing with nobody knowing what was going to happen. I was at the Houston Post at the time and had become friends with a couple of the writers (one who had covered the team, been hired away by them, and then returned to the paper). They all thought the franchise was going to land on its feet. But when the music stopped the Aeros were the one without a chair. I think there was talk of buying an existing team and moving them here but that was a pipe dream. 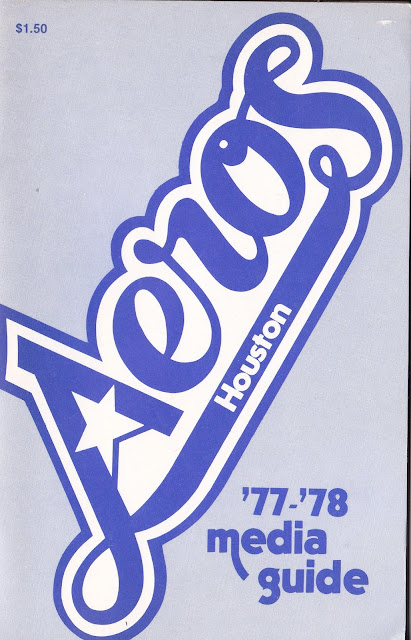 This last media guide had a 'cheaper' feel to it. The pages had changed from the glossy paper to plain stock. There was less to crow about so it wasn't as thick. Plus Gordie and his boys had moved on to the Whalers.

We did get a cool pic of tough guy Terry Ruskowski and an oddly disheveled  Bobby Hull. 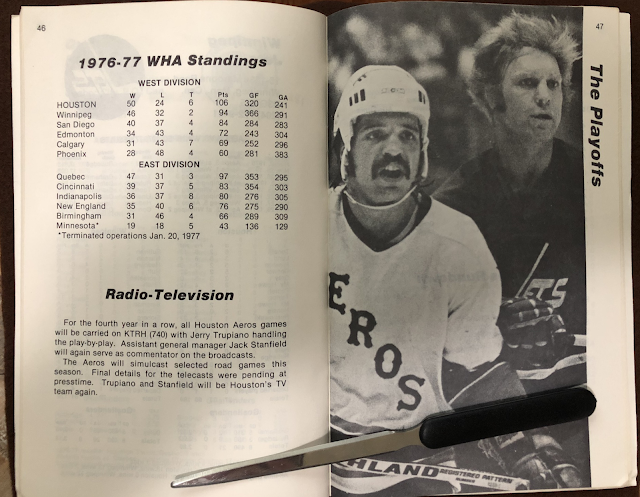 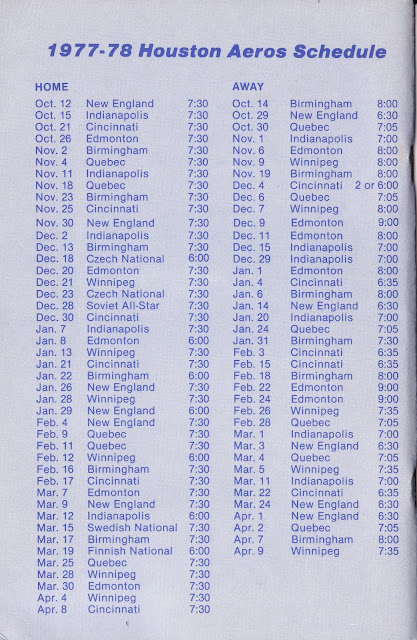 And then they were gone. The WHA played a final season without the Aeros as part of it. In the 90s the IHL/AHL Aeros were formed and played here for about a decade. They were a Minnesota Wild farm club at the end. I had kids by then, and they fell in love with the 'new' Aeros. I enjoyed them as well, heck, hockey is fun no matter what level you're watching, but nothing could ever compare with those days at the creaky, dank Coliseum.
Posted by Commishbob at 7:00 AM