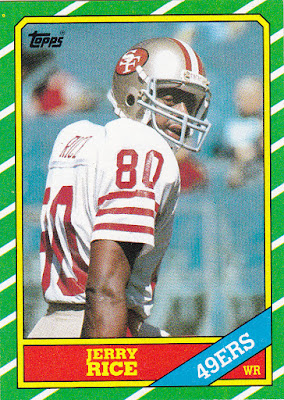 When I take deep dives into sets I think about chasing I have a couple of go-to places for info and opinion. One of them is Sports Collectors Daily. They usually have posted a time or two about any set and you can rely on them to give you the pluses and minuses concisely. What cards go for a premium and why etc.

I think they missed the mark on this one. I love this set. The 'football field' effect of the borders is terrific. SCD had this to say: "Putting it bluntly, the cards aren’t all that beautiful. With the green borders and diagonal yard marker lines, it’s easy to see that Topps was duplicating a football field. The end result, though, just wasn’t all that easy to look at. In addition, the color borders also display the slightest flaws, making them more noticeable."

OK, so beauty is in the eye of the beholder, but in this case, I'm f'ing right and anyone who sez different is wrong. 😉😉😉 I mean look at these things. This Eric Dickerson card is fantastic. 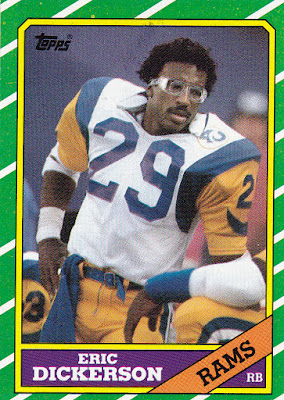 And Jerry Rice (shown up top) got a classic rookie card.

I like the way Topps numbered this thing. It's by team with the Super Bowl champion Bears first. And each team is (with a couple of minor exceptions) put in position order...team card first, then quarterback, running backs, wideouts, tight ends, kickers and so on through the defensive guys beginning with linemen and ending with the punter. 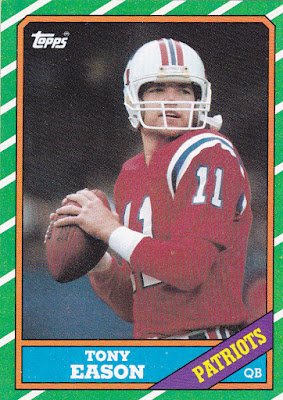 Teams vary in a couple of ways. Some have a pair of quarterbacks and the number of players at other positions changes from one team to the next. When I bindered it a few months back I recall that there was at least one player who was put between players of a different position, a kicker was mixed in with the linemen I believe. Rather than being an error, I'd guess that came about due to Topps finding they had no useable photo for someone who had been penciled in, or possibly they couldn't get the player to sign or return their release.

I need to do some homework there. And some teams lacked a kicker and/or punter. 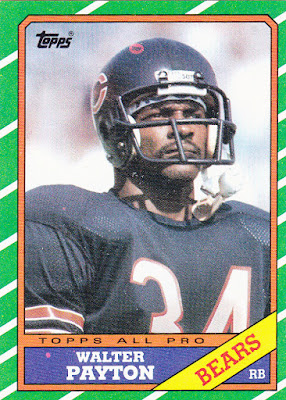 I'll just post a few of the cards that I like, either for the player or the card itself. The Payton card shows how All Pros were designated. 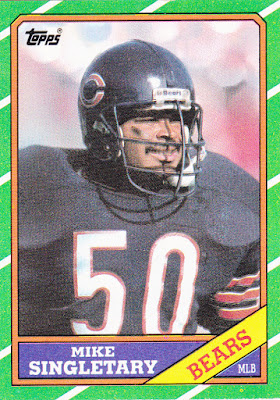 Mike Singletary was a beast. He played at Houston Worthing and the stories that circulated among high school coaches back then made it seem like he was Superman. 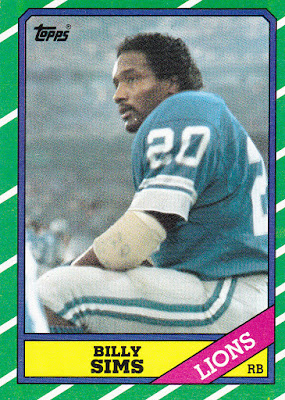 I used to go to a dentist who also had Billy Sims as a patient. He told me that Sims terribly afraid of getting dental work and once braced himself so hard in the chair that he broke the footrest. 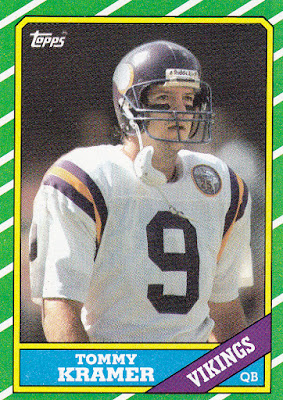 Tommy Kramer, my first fantasy football stud. And one of the few guys I ever recall paying for a signature. 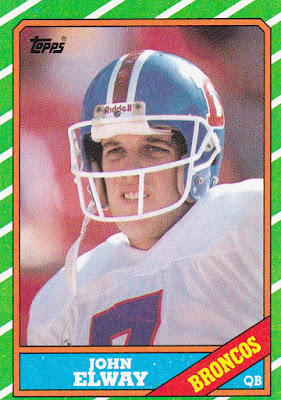 I wish the Broncos would go back to these colors/unis. The stuff they wear these days is crap. 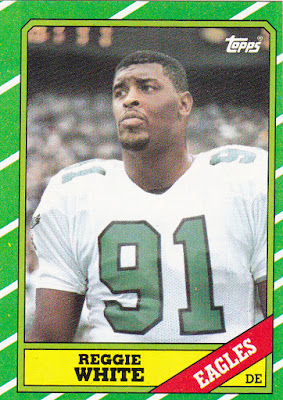 When I hear the name 'Reggie White' I think of him looking like this. Unhappy and ready to take it out on a QB.

I guess it's worth mentioning that I did something different with this set. I bought it in one piece. I usually enjoy the chase almost as much as the cards but in this case, I wanted a consistent, high-quality set, and buying this one piecemeal seemed less than ideal. And I was very happy with the set when it arrived. Not a corner ding in the bunch. Looks super in the binder. 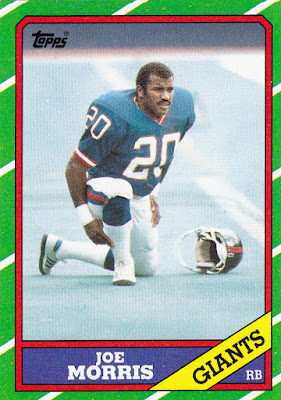 Joe Morris was a guy my father enjoyed watching play for his Giants. I've taken up the torch as a newly minted Giants fan, btw. But that's a story for another post.

The team cards had a Fleer-ish (is that a legit term?) quality to them. What I mean is that they remind me of the stuff Fleer put out when they had the NFL license but not one with NFLPA. 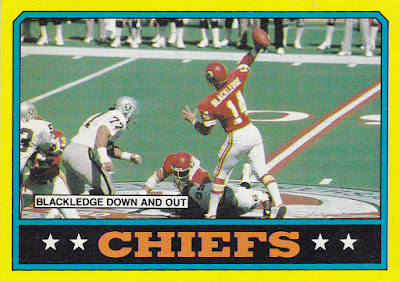 The one subset is Record Breakers and it kicks off the set. Eric Dickerson is the Warren Spahn of football cards...it's damn impossible to find a bad one of him. 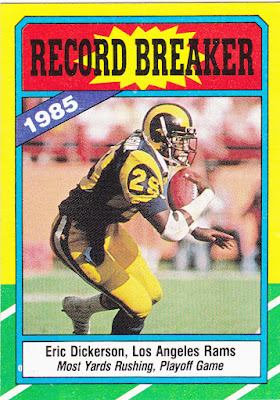 One thing SCD mentioned has me in total agreement... the backs of these things are bad. Terrible color choice, barely readable text, space wasted with pointless artwork, stat box and number both angled and at different angles at that. 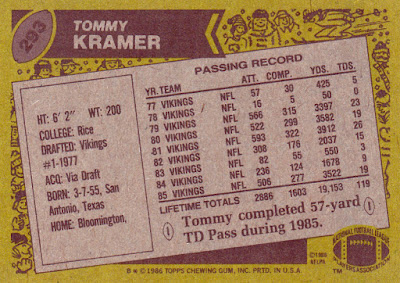 Just not good. They could have made the info/stat box horizontal, Put the NFLPA logo in the upper right, centered the player's name, and done the card number differently. But they didn't ask me. 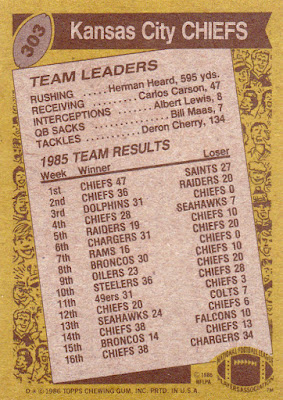 Topps had an insert set in their '86 packs. They went with their 1,000 Yard Club cards as they did for several football sets in the 80s. I'm saving those for a future post. There is a cool Eric Dickerson card in that bunch that deserves the spotlight.
Posted by Commishbob at 7:00 AM