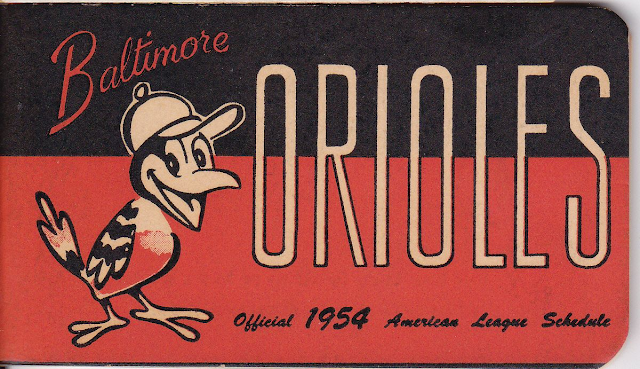 I don't remember where this little item came from. Someone may have gifted me with it. But it's been sitting on my desk for months waiting to be posted.

1954 was, of course, the inaugural season for the Orioles in the modern Major Leagues. So I suppose this qualifies as a 'rookie' schedule booklet. More than that, though, I love that it features a neat design with Jim Hartzell's original Oriole and some fun typography. 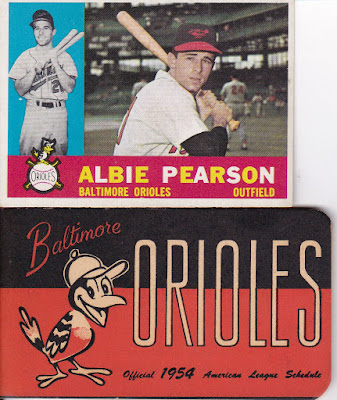 The booklet is 2.5"x4" and I scanned it with a standard Topps card to show how it compares. The card also gives me a chance to plug my 1960 Topps blog. I'm posting four or five times a week over there.

I only scanned the cover. The rest of this post uses phone photos with the schedule held open with clips. I hate squashing old paper items on my scanner's platen. And this piece is in very nice condition.

Most of the pages are a day-by-day American League schedule.

The center pages are specific to the Orioles, beginning with the ticket price and ordering info. NO TELEPHONE RESERVATIONS

Next is the centerfold with stadium and game facts. The opposite page list the Orioles' home night games for 1954. Night games were not the default back then so pointing them out was a necessity I guess.

Next comes a list of Sunday and holiday dates at Memorial. A few things of note include the fact that the Orioles had home games on the three major in-season holidays, Memorial Day, the 4th of July, and Labor Day. There were eight doubleheaders. We're raising a generation of fans who have no idea what it's like to watch two games with one ticket. And it's apropos that the second half of the booklet starts with the All-Star Game, played in Cleveland.

BTW...that was a wild and fun game, won by the AL 11-9. There were four AL homers, two by Indians' corner infielder Al Rosen, a pinch knock by Indians' outfielder Larry Doby, and another by former Indian, Ray Boone. Bobby Avila, yet another Indians' player, started at second for the AL and went three for three before being replaced by Nellie Fox who won the game with a two-run single in the eighth.

Back to the schedule... The whole league took off for the then-annual Cooperstown Hall of Fame Game in August. The Yanks beat the Reds 10-9 with Mickey Mantle hitting a home run.

Following the AL schedule, we get a listing of ALL the league's night games.

Inside the back cover gives us a promo for some big league films available for screening. Nowadays you can just crank up YouTube. 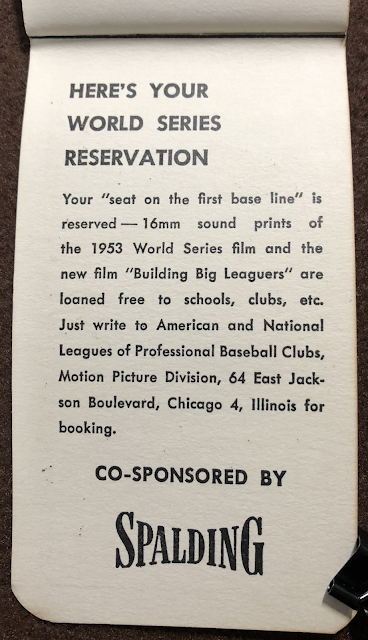 And the back cover had a promotional ad for the official big-league baseball. The AL used Reach branded balls while the NL had ones with the Spalding markings. But as the page points out, Spalding made them both. Spalding had acquired Reach, a rival sporting goods firm, way back in 1892 but kept the name on the AL balls for decades. 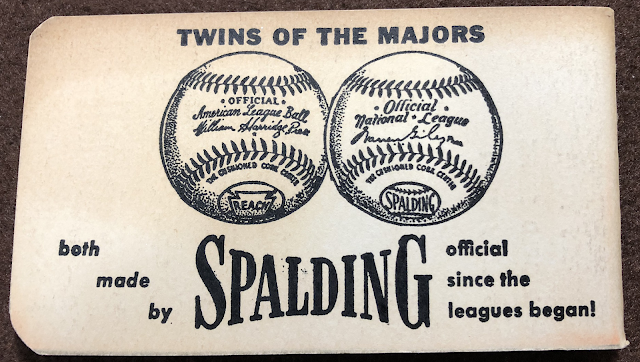 I remember league-wide schedules back when I was a kid. We used to find them at the local car dealerships. I don't think I ever had any with team-specific covers or info, though. It might be a fun area of collecting to dig into.
Posted by Commishbob at 12:46 PM