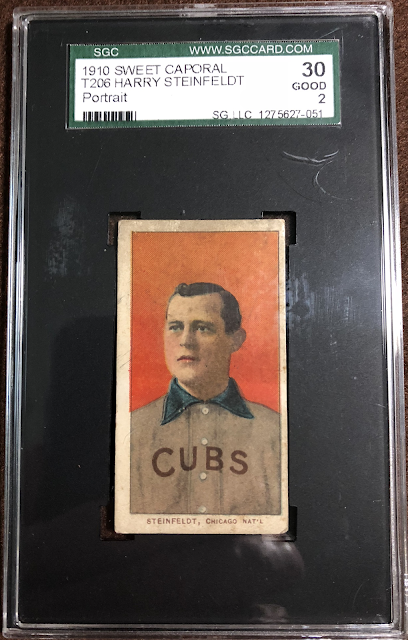 The famous poem from 1912 entitled Baseball's Sad Lexicon was penned by Franklin_P._Adams and extolled the on-field virtues of the Cubs' double-play combo of the day...Tinker, Evers, and Chance. I have the three players on their T206 cards and wrote a post on them a few years ago.

Of course, infields have four players and while I knew the name of the overlooked third-baseman, Harry Steinfeldt, I never thought about him having a card in that set, much less tracking it down. A Net54 member had one up for sale not long ago so I bought it. Makes a nice companion for the other three.

Steinfeldt had a long career that began with a couple of years in Texas playing minor league ball in 1885 in Texas...Houston, Fort Worth and Galveston specifically. His days with Galveston predate the horrific Galveston Hurricane of 1900 which remains the worst natural disaster to ever hit the United States.

He began his big league career with Cincinnati in 1898 and came to the Cubs in 1906. He helped them get to the World Series that season by leading the NL in hits and RBIs. The Cubs lost to the White Sox in the Series that year but came back the next two to beat the Tigers for the crown twice. They played in a fourth Series, losing to the Athletics, in 1910. that was Steinfeldt's last hurrah with the Cubs.

Manager Frank Chance sold him to the St' Paul club who traded him that summer to Boston in the NL. He finished that season with the Braves, spent 1912 with Louisville and then left the game. He died two years later of an undisclosed illness at the age of 38. 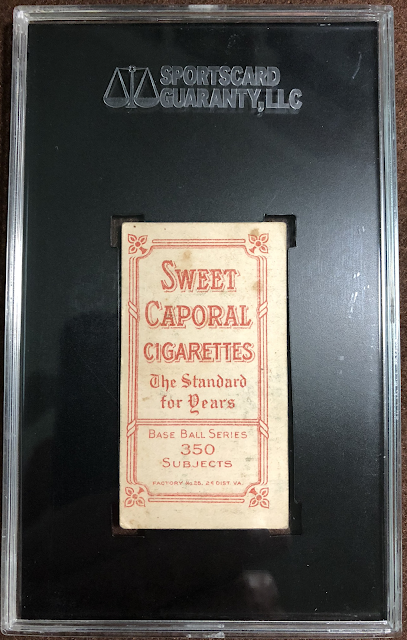 Here is the poem and what Wikipedia has to say about it:


The poem was first published in the New York Evening Mail on July 12, 1910, under the title "That Double Play Again." The day before, the Cubs had defeated the Giants, 4–2, in Chicago, having squelched a late-inning Giants rally with a double play from Tinker to Evers to Chance.

The poem, soon renamed "Baseball's Sad Lexicon," became popular across the country among sportswriters, Grantland Rice among them, who wrote their own verses along the same vein. The poem only enhanced the reputations of Tinker, Evers, and Chance over the succeeding decades as the phrase became a synonymous with a feat of smooth and ruthless efficiency. It has been credited with their elections to the National Baseball Hall of Fame in 1946. 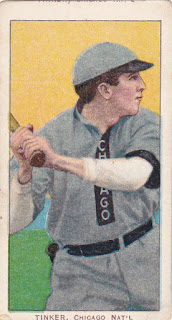 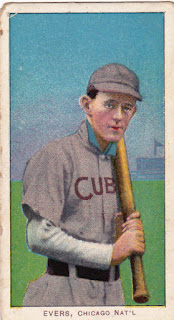 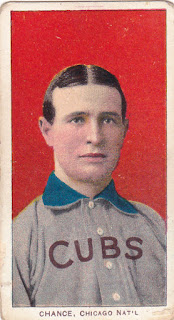 Posted by Commishbob at 9:43 PM