I was rooting around in a box of Oriole items I hadn't looked at in awhile and found a few things that I've pulled out and put back on display in my 'office'.

I think I picked these up in '83 when I traveled to Charm City for the World Series. That was a fun trip, especially sitting in Section 34 for the second game. Being part of 'The Roar from 34' was definitely memorable.


This button is every bit as lame as it looks. it's a 'button of buttons'.  Of those featured pictures I have all but the Scott McGregor (@ 11:00 o'clock on the button) and Rich Dauer (@ 5:00) on individual buttons. 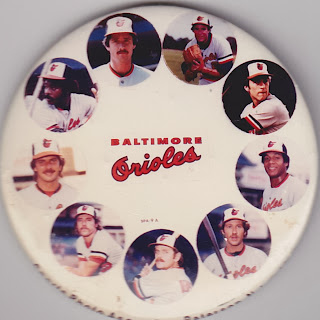 Frank Robinson is a 1966 Spring Training shot. That's an Orioles '65 uniform that they wore through Frank's first training camp before debuting the more modern and familiar unis on Opening Day. 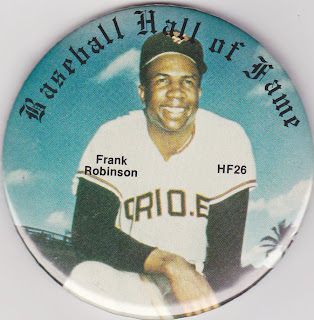 A Series souvenir. That season's Game One was the first Series game I'd ever attended in person although I'd been to several ALCs and NLCS games in Baltimore and Houston prior to that. 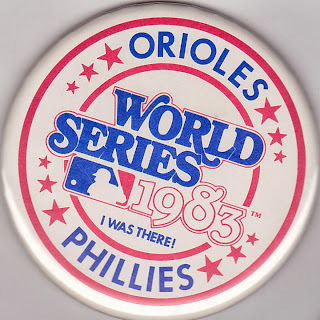 That Game One was memorable for a couple of reasons. The Phils won 2-1 with all the runs coming on solo homes. Jim Dwyer hit one for the O's before Joe Morgan and Gary Maddox solo'd for the Phils off Scott McGregor. John Denver sang the anthem and then sang Thank God I'm a Country Boy from the dugout roof in the seventh. There was a loooooong delay in the top of the seventh because windbag Howard Cosell was interviewing Ronald Reagan and the network didn't want to let the game proceed until that was over. I just remember that everyone was booing. Some were booing the delay, some were booing Cosell, I was booing Ronald Reagan.

The Orioles won Game Two with Mike Boddiker on the mound. I was wearing my game-used Tim Stoddard jersey and late in the game the goofy and generally drunk fans around me were telling me to go warm up, just in case. Jerseys like that were not nearly as common back then and it drew attention. Sitting in Section 34 was a lot of fun even though, according to my uncle who was a regular, a lot of those sitting there were not part of the usual crew. A homer by fan favorite John 'Brother Lo' Lowenstein sent us into a delirious frenzy.

I had a chance to go to Philadelphia for the middle games of the Series but chose to head back to Houston instead. If I had known that would be the last Orioles World Series appearance for 3 decades I would have gone. Game Two was the last post-season game ever played in Memorial Stadium. I miss the old girl. 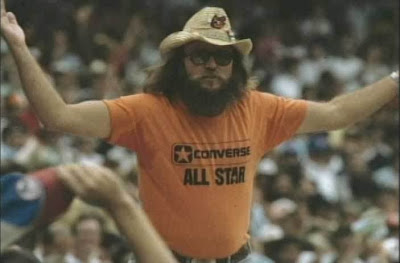