Art Donovan, One Of A Kind 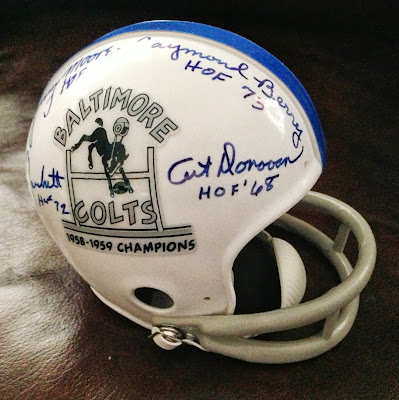 NFL Hall of Famer Artie Donovan died Sunday. He was a member of the Baltimore Colts' Championship teams of 1958 and 1959. The Baltimore Sun, in their obit piece, said that Donovan spent 12 seasons in the NFL and the rest of his life telling everybody about it. I was about 10 when he retired so I don't have many memories of him playing specifically but I was a huge Baltimore Colts fan and I can remember the glory days of that wonderful franchise. I used to spend fall Sunday mornings in church praying for my Baltimore Colts.

Here is a really nice piece that ran in the Sun following his death. Some really funny stuff there. But then again Art Donovan was a really funny guy. And I can't fail to note that he was a member of the United States Marines and saw duty in the Pacific as an antiaircraft gunner on the U.S. San Jacinto.

Donovan was always called 'Fatso' and that was the name of his autobiography. He probably garnered more attention as a guest on the late night talk shows in his retirement than he did as an active player. I got to meet him once after his retirement back when the Baltimore Colts trained at Goucher College in Towson near Baltimore, probably around 1981 or 1982. I always made it a point to watch a practice when I was in town for my summer trip.

There was a little rope fence that separated the fans and the field and one day Donovan came down the line slapping backs, shaking hands and telling stories. I didn't get him to sign anything that day but a few years ago I picked up this commemorative Baltimore Colts mini helmet signed by six players from those great teams including four Hall of Famers, Donovan, Raymond Berry, Gino Marchetti and Lenny Moore.

A couple other Donovan items from my Baltimore Colts collection: 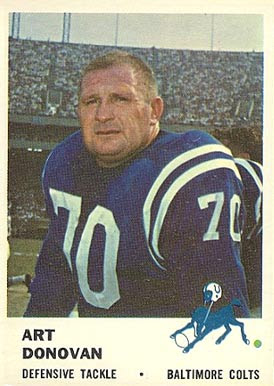 1961 Fleer Art Donovan. One of my only regrets is that I never saw a regular season Baltimore Colts game in Memorial Stadium. Just looking at that card drives that home. What a place it was.