Vintage Bowmans from the Card Show, Part One

Damn Blogger. I had this post written on Sunday night and when I scheduled it for Monday it just vanished. Here is my second shot. I'll skip my 5 paragraph rant about the current state of card shows. I summary I spent $22 to park and enter the Houston TriStar show today, bought a handful of cards that will be going to the post office soon, and snared four Bowmans, two each from the '49 and '50 sets. Total asking price for the Bowmans was $15.50. I offered $12 and walked away happy.

The guy selling these was the last dealer I visited. He had many boxes of vintage and a sign reading "70/80/90% off Beckett."

I skipped over the Topps and dug through to the Bowmans. I have a few from 1951 on but nothing prior. Now I do. Most of the Bowmans were in rough shape, to put it mildly. But I found some very presentable ones and settled on four. Two, the 49s,  I'll show here and the two 1950s will be in my next post. 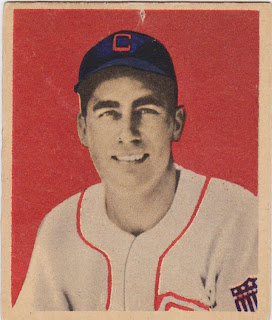 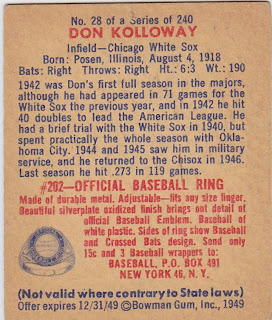 Don 'Cab' Kolloway played for the White Sox, Tigers and, very briefly, the A's between 1940 and 1953, with a couple of seasons spent in the military during WWII. He hit .271 in nearly 1100 games as a second-baseman and later, with Detroit, a first-baseman. This card is considered his rookie card despite being issued nearly a decade after his big league debut.

After he retired he opened a bar, cleverly named Kolloway's, in Blue Island, Illinois and ran it until 1969. He passed away in 1994.

The very serious looking Jake Early toiled behind the plate for nine seasons between 1939 and 1949, all but one with the Senators. He hit only .241 for his career but he did make the 1943 AL All Star team as the starting backstop and scored a run and had a sacrifice in the AL's 5-3 win.

Early played, coached and managed in the minors into the early 1960s and actually got some playing time as player/manager in 1960 giving him a span of 24 years between his first and last pro at bats. His defensive stats point to a lack of skills behind the plate but he did have a powerful arm. In fact he once picked Ted Williams off base twice in the same game. The second of those came in the ninth inning with Williams getting nabbed off third with one out and representing the tying run! The Nats won that game 1-0.

While both of these cards have flaws (the Kolloway has a pin hole and the Early has creases and some staining) I am glad to add them to my collection, particularly at an average price of $3.
Posted by Commishbob at 12:30 AM