My Kind of Town (Chicago Is)

I've been to Chicago before but not during baseball season so our vacation last week gave us the chance to visit the 'Friendly Confines' and take in a game. The fact that the Astros were in town was just a happy coincidence enjoyed by my Houston-born sons.

This is a bit off my usual style of post but I'm going to show a few pics from our stay in the Windy City. First stop out of Midway was a great little family-owned hot dog stand in the shadows of Comiskey Park U.S. Cellular Field. 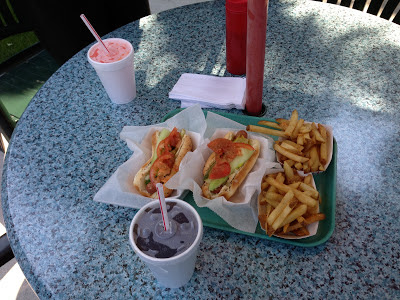 On Sunday our little group took the 'L' to the Addison St. station and watched the Astros put on one of the worst exhibitions of baseball I've seen since my tee-ball coaching days. Below are my twin boys, Brooks Robinson Andrews and James Palmer Andrews (who came in from Lincoln, NE for the fun). 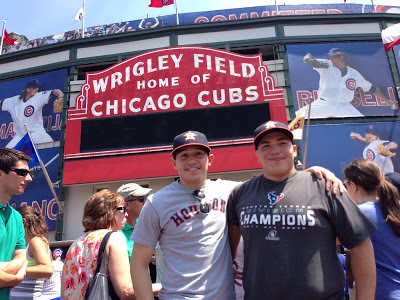 Brooks' better half Ashley was making her second trip to Wrigley. They had visited last July. 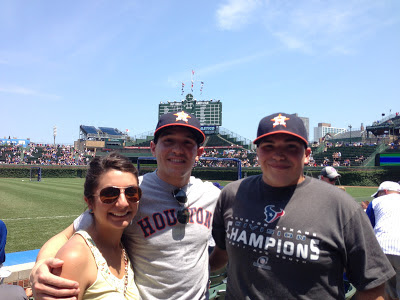 Here is the merry band of Astro fans in our seats in Section 216. Just out of sight are an Orioles fan husband/wife pairing that were sitting in the row in front of us, a lone Oriole cap-wearing fan in the next section and a couple of O's fans sitting a few rows in front of us that we noticed when the crowd thinned late in the game. Sadly the Orioles were getting crushed by the Jays that afternoon so my family had little to cheer about. But we had a great time anyway. 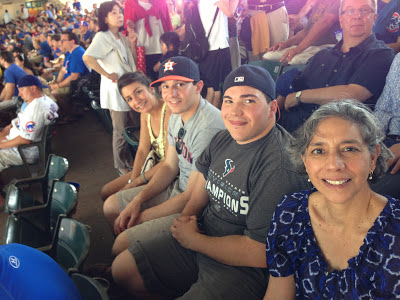 Pregame panorama. I learned how to take those about 10 seconds prior to this attempt.

I loved seeing the rooftop bleachers. They were packed. And it was a beautiful day. 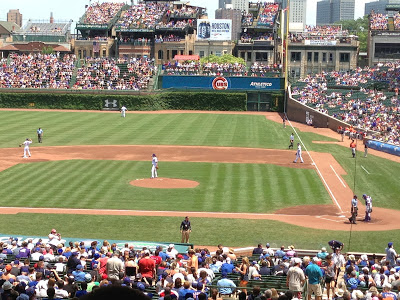 Joe Torre (that's him leaning on the rail) traversed the catwalk behind the suites just above us several times. Every time I saw him it was too late for a good picture. 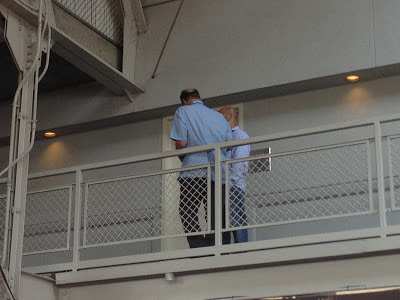 We stayed to the bitter end of the Cubs' stomping of the bumbling 'Stros. You really can't leave until they sing that song and raise the "W" flag above the scoreboard. 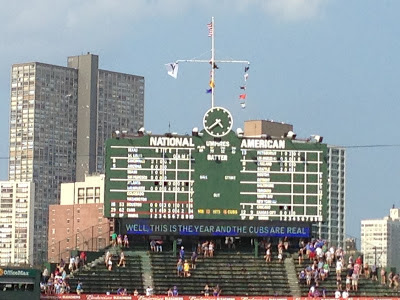 So much for the travelog. Here is my only souvenir, the game program. Pretty routine as far as programs go. The usual selected player blurbs, previews of opponents coming in on the current homestand and lots of ads. 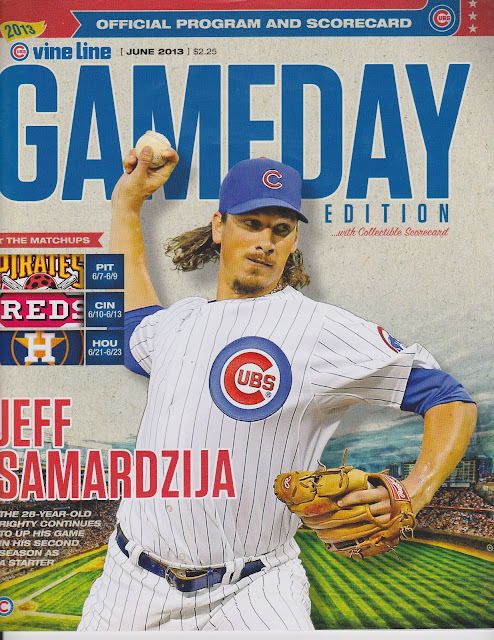 But contained in the centerfold was a good old fashioned heavy stock scorecard. What was really cool was that the 30-something (and very attractive) gal in front of us was keeping score on hers! I haven't seen anyone keeping score at a ballgame in ages. 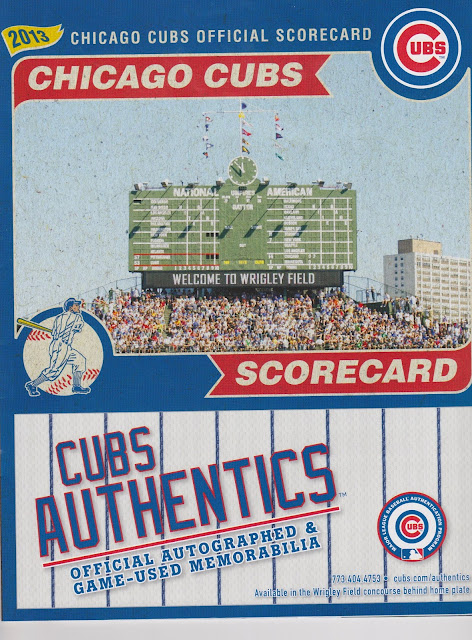 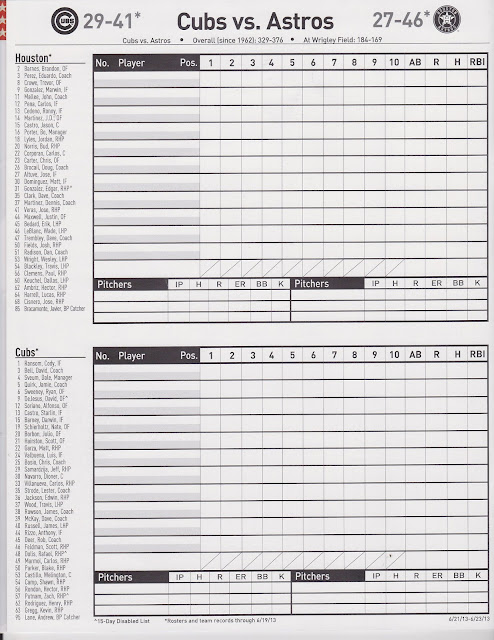 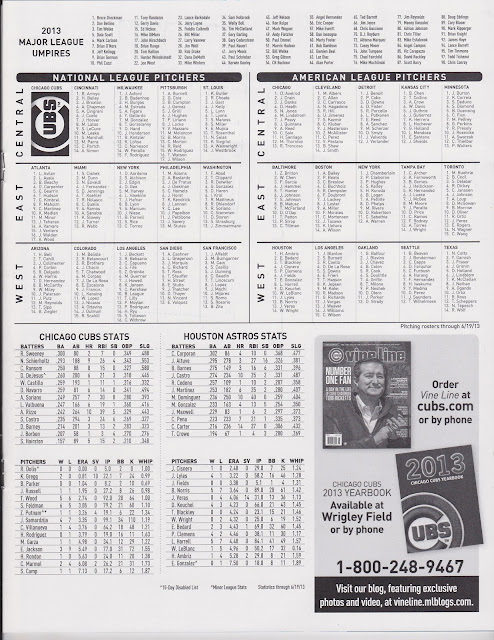 We were in town when Game 5 of the Stanley Cup Finals was going on at the United Center but we were at a wedding and had to track the game on smartphones during the reception. It was really fun to see the city decked out in Hawks flags. They were all over the place downtown. 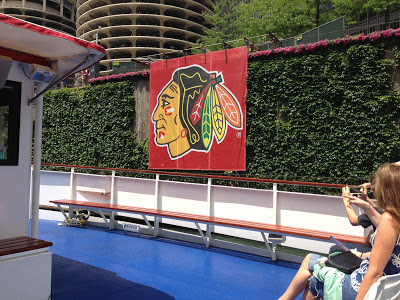 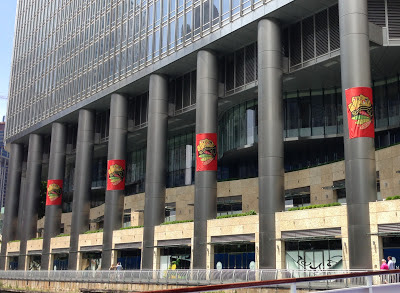 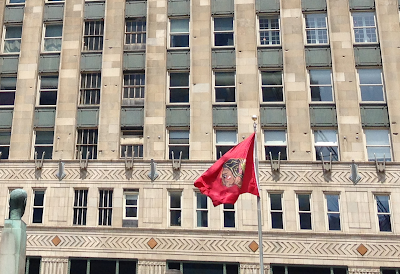 We've seen the Blackhawks at the United Center (a great experience!) and when I was growing up the Bruins were my Rangers' major rival (always fighting for 5th/6th places behind the playoff bound Hawks, Wings, Leafs and Habs). Somewhere along the line that animosity seemed to fade a bit but it never left me so, given all that, I was pulling hard for Chicago. I sprung for the $5 to be able to watch the big 6th Game on Monday night's flight out of Midway. Lots of fun. Here is my only card of a current Blackhawk. 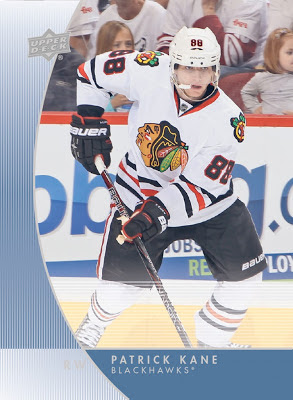