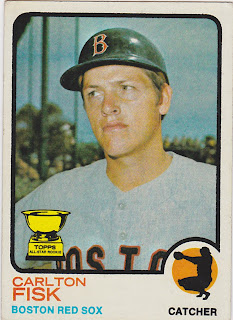 Carlton Fisk, hero of Game 6 of the 1975 World Series. Any baseball fan old enough can in all likelihood tell you about where he or she was when they watched that dramatic blast. I know i can. I was in a friend's room in the dorms at the University of Houston. Big crowd of buddies watching. I don't even remember who I was pulling for, probably the Sox. But I remember the uproar when Fisk hit it out off Pat Darcy to force the Reds into a 7th game.
I'm not a big fan of the '73 set but I've got a nice size stash of them. This is Fisk's second card, he shared a '72 rookie cards with Mike Garman and Cecil Cooper. The Topps 'Rookie Bowl' trophy isn't as cool as the 'Top Hat' one but it's still a nice addition to the cards.
Here is a video of that moment including a postgame interview with Fisk.