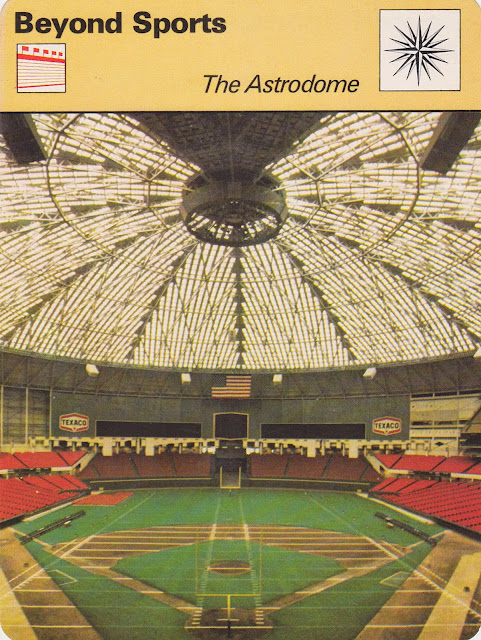 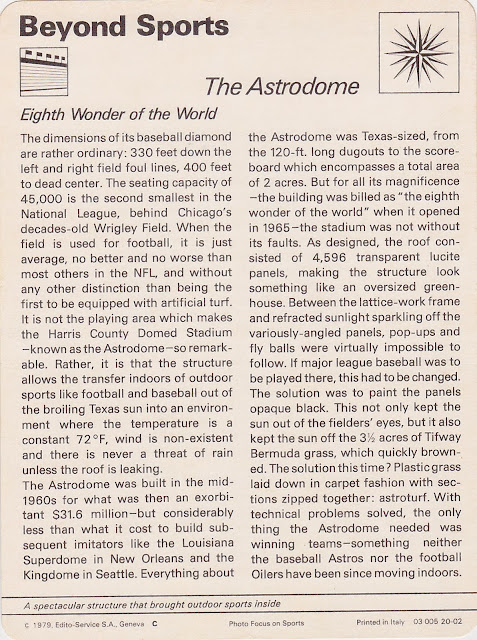 The Sportscaster Card set is a monstrously huge set of oversized cards that were sold via subscription in the late 1970s. They covered just about every possible aspect of sports from athletes to coaches to venues and equipment. The cards were marketed in the U.S., Europe and Japan and I believe they were mostly printed in Italy. There are several sites dedicated to them and this one has a database listing all of them.

I recently picked this one up online along with three other 'non-sports' oversized cards via an eBay dealer. The other three are from similar sets and are European in origin. I'll get to them soon.

The Astrodome is currently the subject of much debate in the Houston area these days. The place is slowly decaying as it sits unoccupied next to Reliant Stadium and I've seen estimates for it's yearly 'upkeep' costs as high as two million dollars a year. The basic argument is whether to bring it down or 'repurpose' it.

I sure have great memories of the place. I sold beer there for awhile at Oiler games. I had my first date with my wife there at a Houston Cougar football game. I can't list every great event I've seen in it but they include some thrilling Astros playoff games, and in particular the Game of the Century between Houston and UCLA in January of 1968.

I picked this card up simply because it shows the exact view I had from my UH football seats as well as the view I would have had if I could have seen anything from my beer kiosk on the mezzanine level.

I also found a version of the card done in French being sold on eBay.

Posted by Commishbob at 1:28 PM