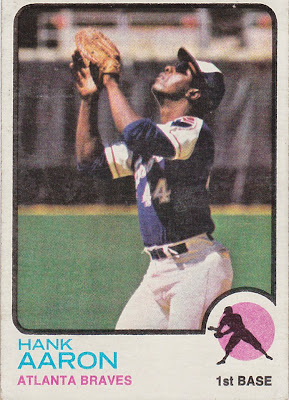 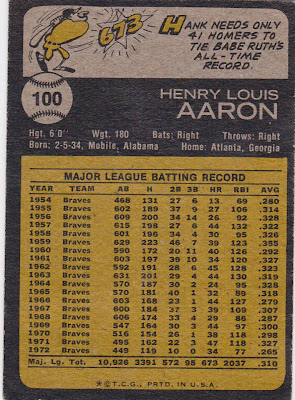 From my stacks of slightly worn 'vintage' cards comes the first of three Hammerin' Hank Aaron cards. There is no special reason for this short three post tribute to Henry. It's not his birthday week, I'm not a Braves fan (except for their Milwaukee-era caps) and I'm not heading to Atlanta as far as I know (in fact I'll be in Chicago later this week).

I simply was going through some cards and came across three Aarons and figured 'why not?'. This is, of course, the 1973 Aaron, numbered 100 in the set. It brings out mixed feelings in me. First it's good because it's Aaron, one of the greatest players of his or any era, a guy I was lucky enough to see play many times.

OTOH it's not a one of the classic Aaron cards. For one thing he's listed at 1st Base. For another he's wearing that goofy Braves' kit that featured sleeve feathers. I might not have hated it so much but for the fact that the Braves have had some great uniforms through the years. This isn't one of them.

And the '73 Topps set in general kind of leaves me flat. There is that generic silhouette, the odd color combos and most of all, ABSOLUTELY most of all.... the 'action' photography, much of which appears to be taken by an 11 year old from the box seats on Camera Day. 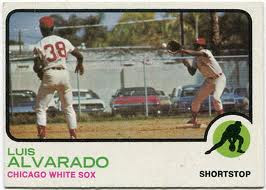 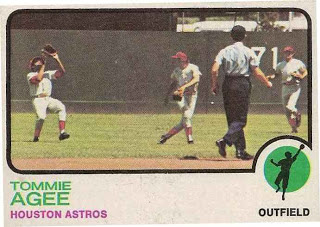 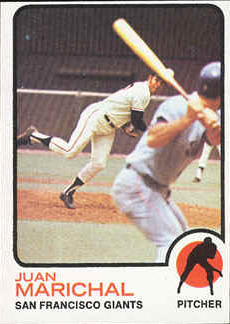 But I dig the Aaron. It's much more tightly cropped and it has one of my favorite card features... a huge ass wall of stat text on the back. All those wonderful numbers lined up in columns. They were just begging to be compared and contrasted by the 'much younger and more into stats' me.

To be fair, not every '73 live action type card sucked. The Jim Palmer is one of my favorites of him. 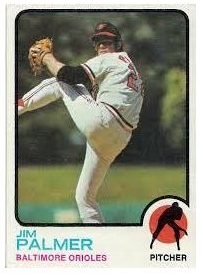 There is a bust outside that ballpark commemorating that. 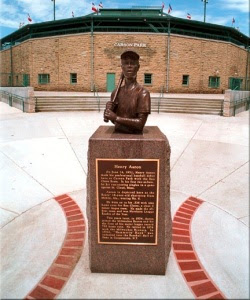