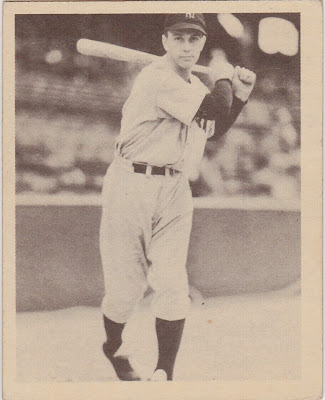 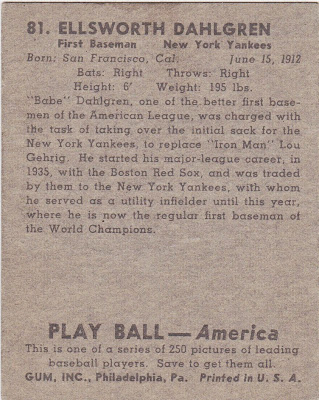 While doing some digging for my latest 1960 Topps managers card post I read Joe Gordon's SABR page and came across this paragraph, note the line in italics:

[Joe] Gordon plowed new ground in 1941. Dissatisfied with the play of Babe Dahlgren, Lou Gehrig's successor at first base, the Yankees traded Babe to the Boston Braves of the National League in February and moved Gordon to first base. (It probably didn't help Dahlgren that he was the subject of rumors that he smoked marijuana. In 1943, Dahlgren voluntarily took a drug test, which was negative.) New York brought up shortstop Phil Rizzuto and second baseman Gerry Priddy from their Kansas City Blues farm team of the American Association. Under the tutelage of teammate Johnny Sturm, Gordon learned to play first base in short order. But Priddy was having troubles at second base and on May 15, after a 13-1 pasting at the hands of the White Sox, he was benched. Gordon moved back to second base (he had played 30 games at first) and Sturm was inserted at first base.

Marijuana? A 1941 drug test? Interesting. With all the talk of PEDs these days we tend to forget that previous generations of ballplayers had their own issues (alcohol, amphetamines, etc.). I'd heard of Babe Dahlgren. I knew he was the guy who had the job of replacing Lou Gehrig at first base for the Yanks, but never knew that story and I wanted to know more. So I poked around and discovered this book, written by Dahlgren's grandson Matt which sheds light on the subject (a glaring spotlight, really). 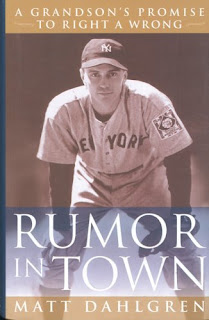 In writing the book Matt Dahlgren was trying to find the source of the rumors that essentially ruined his grandfather's career and haunted him until his death in 1996. And he succeeded. New York Times writer Murray Chase sums up the Babe Dahlgren story and talks about the book far better that I can in this Times article from 2007.

I ordered a used copy of the book from Amazon and it was here waiting for me when we got back from vacation but there are a few in front of it in my reading queue. I'm looking forward to it.

Also waiting for me was the 1939 Playball Babe Dahlgren that is shown above. It's my first card from that set I think. It's really in nice condition, too. A little off center but everything else about it is top notch. For about $10 shipped on eBay I am very happy with it. The Play Balls have a clean design as you can see, picture on the front, a write up and particulars on the back. Plenty of background info on this groundbreaking set is available thru the magic of the interwebs.


Bonus section... Matt Dahlgren has put several videos featuring his grandfather on a You Tube page. Well worth checking out for the historic value. There is also an interview with Babe Dahlgren about his replacing Gehrig. I'm going to embed one of the videos. This is my favorite. Look carefully for Al Schacht, the 'Clown Price of Baseball', doing his routine on the mound prior to Game Two. And this is extremely rare color footage of the '39 Series. Priceless stuff.

Posted by Commishbob at 5:02 PM