"Year of Vintage?" I'm down with that.

Over on his blog Night Owl has declared 2013 to be the 'Year of Vintage." You won't hear me arguing with that.  I'm all for it.  He even goes so far as to try to define what constitutes 'vintage', and he more or less sets the bar at 25 years. My gut tells me that it's like it's one of those deals where I'd quote the Supreme Court's Justice Potter Stewart:

I shall not today attempt further to define the kinds of material I understand to be embraced within that shorthand description; and perhaps I could never succeed in intelligibly doing so. But I know it when I see it.

I think it's all perspective. To me the 1981 Eddie Murray rookie card isn't 'vintage' but the 1964 Pete Rose rookie is. Why? I don't know. Maybe because I was an adult about to be married in 1981 but in 1964 I was a kid at St. Mary's School in Nutley, New Jersey. But let's just say that Night Owl is right (he usually is) and 25 years marks the ever floating cut off between 'modern' and 'vintage'. I'll try to spit up a few more vintage cards here in the next few weeks.
I'll start with this one which I guess would qualify as 'vintage within vintage'. The Inception version of a vintage card. It's the 1960 Fleer Judge (Kenesaw Mountain) Landis. I don't recall ever getting these cards in packs (I do recall 1960 Topps in packs I got for Easter) but it's not hard to envision the unbridled enthusiasm that young collectors felt when they opened a pack of Fleer in 1960 and were face to face with this this dude. A card of a cranky old man, that's the ticket. He looks like the guy who would never give you the ball back when you fungo'd it into his side yard by mistake. 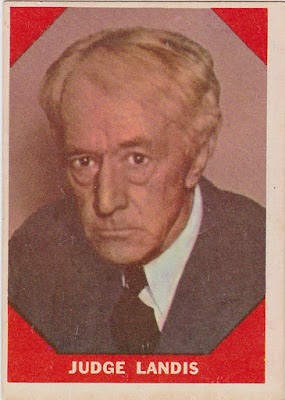 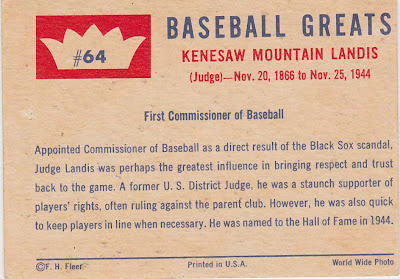 I know it wouldn't cause me to beg my Mom to run back inside Little's Pharmacy and buy me one more pack. The 1960 Fleer Baseball Greats set consisted of this type of colorized portraits of old time players like Ernie Lombardi and early figures we've come to call 'contributors', like AL President Ed Barrow. There were also a couple of more contemporary guys included, Ralph Kiner and the still active Ted Williams. 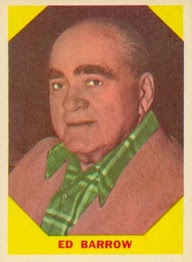 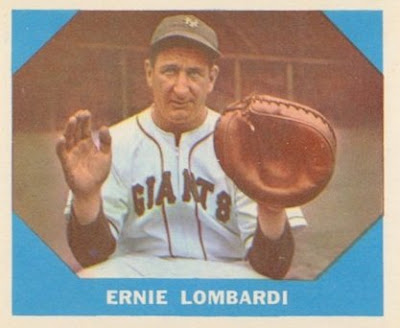 Buried deep in my card storage closet I have about a dozen more of these babies that I bought as a lot from an ad in Sports Collectors Digest in 1980 or so when I had the notion to put together a Hall of Fame set. I figured I'd never get a chance to buy a card from many players playing days and many Hall of Famers, like Judge Landis, had no card at all other than these sort of things. My H-O-F collection never came to fruition but I hung on to these Fleer cards. 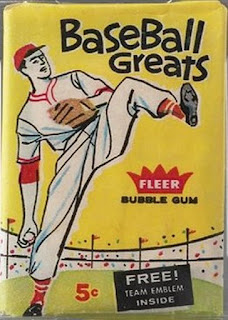 I found this photo of a pack online. I checked eBay and saw a complete set going for $300. That's probably due to the cost of the Ted Williams card. I wasn't tempted.