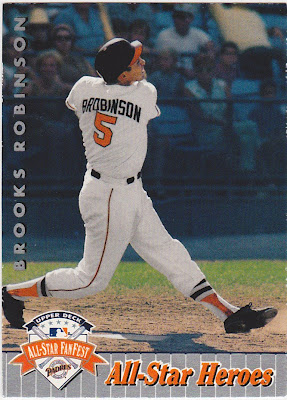 I had planned on going to the big Tristar memorabilia show last Saturday. But I was sick as a dog and didn't make it. Since I'm not really looking for anything in particular, don't have a want list or anything, I was OK with missing it. I figured it was money that would be better used on our vacation trips anyway. So, unlike in the old days, I blew it off. No big deal.

That is until Monday morning when good ol' Night Owl started chirping about his weekend card show experience. He picked up some really cool stuff. Grabbed a couple of nice Koufax Leader cards, some '77 Topps he needed and a bunch of stuff from bargain boxes. Even a recent shiny Topps Frank Robinson card that I'd never seen, Very cool. And so I felt that twinge of regret. Now I was wishing that I HAD gone to the show on Sunday when I was feeling better and not worried about being 'a good husband' and taking care of what was needed to be done at home. I was kind of kicking myself all day at work. That lasted until I got home and a big thick yellow mailer was in the box. It was my goodies from Chris of the Nachos Grande blog! I had bought in to his group break a couple of weeks back AND claimed his 'trade stack' by sending some cards off his want list.

So I was feeling instantly better. I was getting some new-to-me card stuff after all. Cool. I opened the package and then spent the better part of ten minutes getting to the cards themselves. Chris' mailouts are pretty much secure from any possible natural or man-made disaster. When the Zombie Apocalypse occurs only Twinkies, roaches and Chris' card packages will survive. But with the help if a box cutter and some elbow grease I was able at last to spread out the goodies across my desk. The group break cards consisted of Orioles which I claimed as my team, and Astros for which I had traded my randomly assigned 2nd team, the Twins. That trade, by the way, was one I regretted for awhile when early packs opened by Chris contained no Astros and at least one Twins 'hit' and some other neat cards I could no longer claim. But in the end the Astros represented themselves pretty well.

The Brooks Robinson Upper Deck card at the top was one of the Orioles. I like it because it features a picture I don't recall seeing on a card. I got the Ripken out of that set as well. 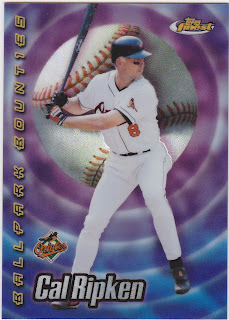 This is a Topps Chrome Ripken from a year I can't read off the back because the printing is too small for my old eyes. If you have some of these you can appreciate the live and in-person over-the-top look of them. Did they all have a hologram baseball and tie dye design. I'm getting facial tics from staring at it right now. Let's move on. 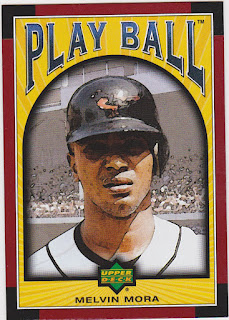 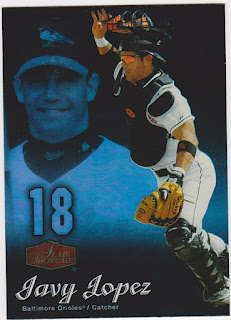 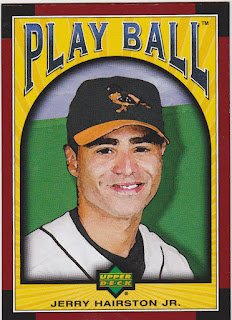 These three cards are of Orioles players who played most of their careers while I was not paying attention much. There is a big gap in my baseball fandom history from the '94 strike to about 2010 or so. Other than a very casual knowledge of the Astros' doings during that time and a couple of games in Camden Yards and  Yankee Stadiums II & III I was oblivious to the game. Anyway, there were several cards from each of the sets you see. And Astros from those sets, too. These included local players I DO know. 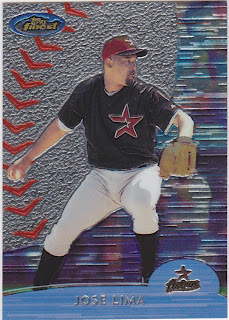 It's Shiny Holographic-ish Lima Time! I think you had to live in Houston back in his prime to appreciate just what a squirrel he was. He was on TV all the time with one stupid commercial or another. What a character. He had a sizzling wife, though. I once told my wife that Lima's wife was the only woman I'd leave her for. My wife rolled her eyes and gave me 'that look'. She's heard me say that about Giada, too. 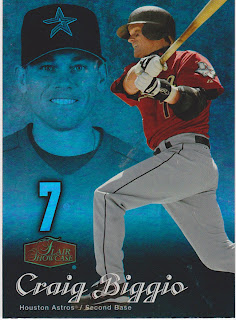 Craig Biggio will make the Hall of Fame one of these days, maybe next year. My kids loved him. They went to see him get his 3060th and last hit in his last game from field box tickets courtesy of dear old Dad. 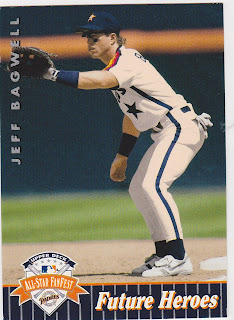 Here's a rare Jeff Bagwell card that does not feature him swinging like he wants to hit one to another dimension. 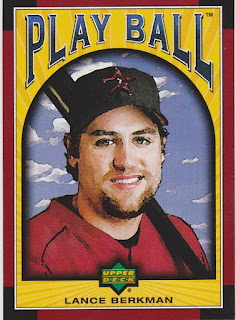 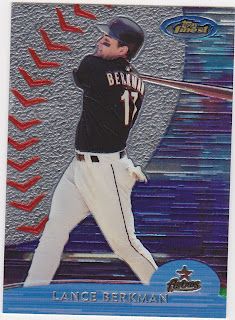 And a couple of cards of my favorite Astro, Lance Berkman. I first saw him play at Rice University. And he seems like a real gem of a guy. I'm really happy he got his World Series ring, even though it was as a Cardinal. Could have been worse, he could have won it as a Yankee. That Cardinal-Rangers Series, by the way, is pretty much what won me back as a baseball fan.

And now for my two favorite group break Oriole cards: 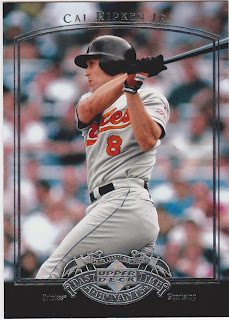 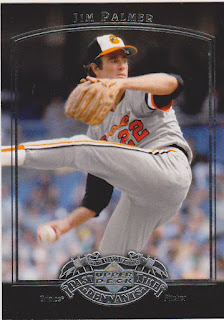 I just love the Upper Deck Past Time Pennants set. Just terrific photography and a sweet design. I got four from this set, two I had that I've shown before, the Eddie Murray and the Brooks Robinson. Of course the best one I own is the gorgeous Rocky Colavito. The Ripken and Palmer make it a nice foursome of Oriole cards from this set. I have a nice four card display frame waiting to be filled.

That's enough for now. I'll post a couple more, including the card a wasn't expecting that turned out to be my favorite of the break, when I get the chance. I'll also show off the cards I got in the 'trade stack' group.
Posted by Commishbob at 3:00 AM