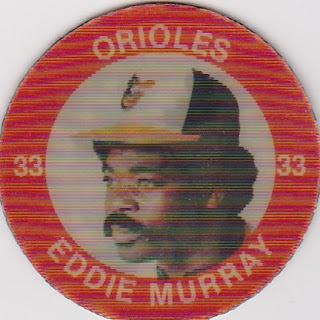 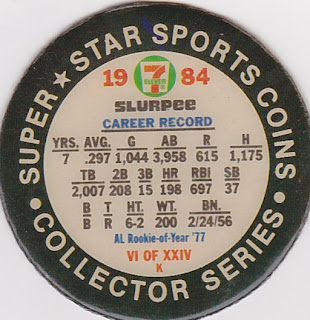 Back when 7-Eleven convenience stores had a presence in Houston they had a lot of promo tie ins with Major League baseball. Unlike a lot of the player/product tie-ins back then, the MLBPA ones specifically, 7-Eleven held a licence to use the team names and logos. We got Slurpee Cups and Slurpee Cup discs like the Eddie Murray above.

I've also seen some of the cups with generic caps on players. I'm guessing the were produced prior to the licence being acquired. There were also NFL, NBA and Hall of Fame player cups but I don't remember getting any of those. They have had other tie-ins (Star Wars?) since they sold off the stores here in Houston.

Without any research I'm going to guess the that the cups preceded the discs based on the players I have in both forms. I've got a couple of Brooks Robinson cups and some other 60s/70s players. The discs I've seen are from 1984 and 1985. IIRC the disc came with the wax paper version of the cup and was found under the cup held in place by a cardboard insert. At least that's how I remember them.

The discs are like the old Sport Flicks (sp?) cards in that they are 'motion' based. Turn the Murray a bit and a picture of him in a batting stance appears.

Anyway here are some pics of the 7-Eleven cups that I've grabbed from the 'net. 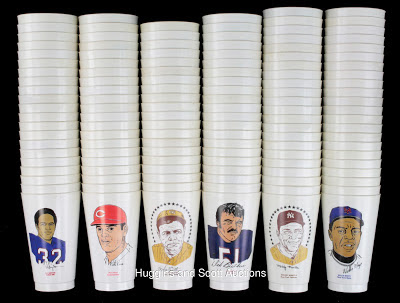 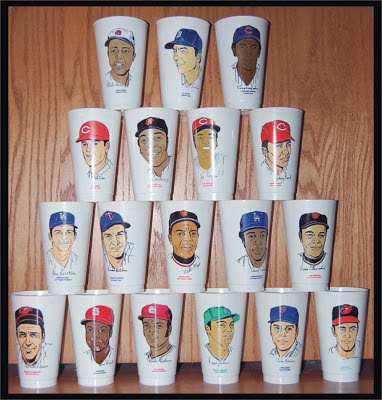 And I've heard rumors that the company is re-entering the Houston market. That's good news because having two or three convenience stores per block in Houston just doesn't cut it.
Posted by Commishbob at 6:30 AM