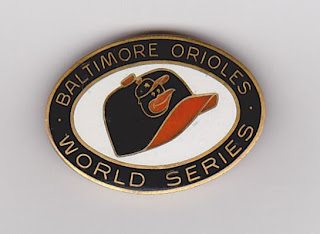 Nowadays all Super Bowl logos look alike, and there are only generic World Series programs every year (I believe only the covers are different for each team). Thankfully there is still the tradition of each World Series participating team giving out out pins to members of the press and special guests.

While the 1969 World Series is still a painful memory for me there is absolutely nothing wrong with this terrific pin. It's one of my favorite Oriole items. Part of the pin's appeal is that it came to me from a member of the Orioles family who I became friends with in Baltimore in the late 80's. This is a straight 'pinback' style pin rather that the more often seen 'post and clutch' style. Not sure why the O's went that route. I also see this in 'charm' form which was what was given to wives and the other female personnel who were awarded them.

I've got three of the Orioles six Series pins (and the beautiful 1958 and butt ugly 1993 All Star Game pins). I'll get them up on here soon.

In the interest of fairness here is the Mets' pin from the same Series. I found this pic. I don't own the pin. Why would I? 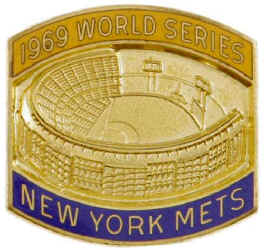