Over the Christmas break my wife and I took a trip over to Austin to listen to some live music (Austin is a great town for that) and to visit the recently refurbished LBJ Library & Museum on the University of Texas campus. We'd been to the place many times in the past and although it's always interesting (I've mentioned many times my interest in LBJ) we both felt it was time for them to make some changes and last year they did just that. The re-opening was in early December and we had heard good things.

Indeed the Museum is greatly improved with some wonderful memorabilia and displays invoking the life of the former President and particularly the decade of the 60's when he served as President. If you have an interest in that rather remarkable decade or know someone who does it's a worthwhile trip for sure. It had always been free to the public but they have started charging for admission. But since we arrived at 3 p.m.  they waived the $8 and asked for a donation instead. We went back the next day and did the same.

First have a look at a Topps 1972 card of Johnson from their U.S. Presidents set. I picked this up online a few weeks ago. I had been unaware of it until I happened upon it somehow. 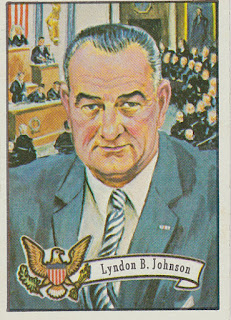 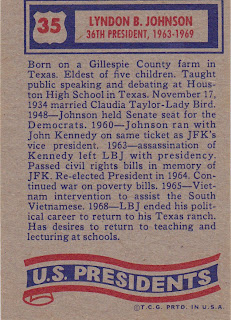 This is an older brochure from the Museum. I picked up new ones but damned if I can find them right now.

One really fun thing to do is pick up these 'phone' receivers they have scattered among the displays. You can listen to some recently declassified phone conversations that were taped by the presidential staff. Fascinating stuff, especially those that give you a taste of Johnson giving a friend or adversary a bit of his ....ahem... persuasive tone. 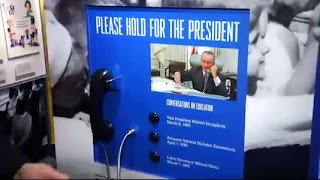 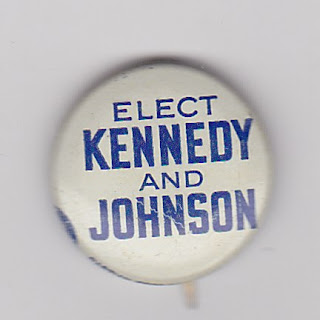 Below are a few items I picked up in the gift shop. First, a couple of 1960 Kennedy/Johnson campaign pieces. A pretty neat place in and of itself. I think I had the lapel pin already but for $1 I grabbed another one to display. . In those days my folks were serious Democrats and we were a 'Kennedy Catholic' household. That changed over the years and by the early/mid 70s my parents were consistently voting Republican. 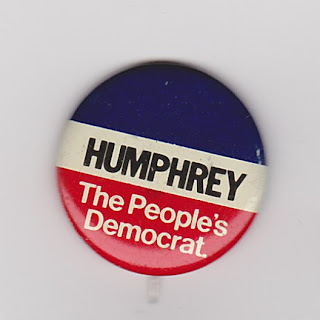 1968 Hubert H. Humphrey campaign button, also from the gift shop. He was LBJ's vice president. Back in those heady days Humphrey was a hero of mine for his liberal stances on social issues. I've wondered how this country would have been different if he had defeated Dick Nixon in 1968. I was surprised to find that when I googled 'HHH' the first pages returned were about some dipshit wrestler that went by that moniker. Sweet Jesus, have we come to that? 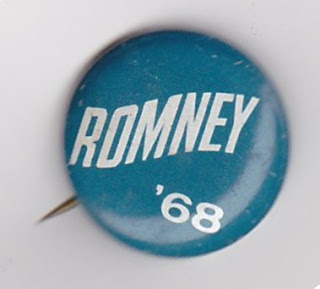 1968 George Romney (Mitt's Dad) campaign button. See, they are an open minded museum. G. Romney didn't win the Republican nomination. Richard Nixon did and we all know how that turned out.

Posted by Commishbob at 5:39 PM