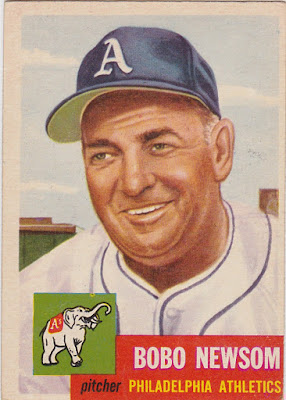 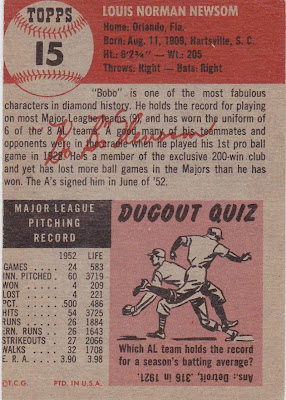 I've really been enjoying Classon Ave's Adventures in 1952 Topps blog. I'll never be able to put that set together but it'll be fun watching him do it. And like me, he's not all that concerned about condition so it's an attainable goal.

One night I got to wondering how many of the players pictured on the '52 set had played with or against Babe Ruth. With his last season being 1935 I knew it was probable that a handful of the older players had done so. I was just beginning my informal research* when the name Bobo Newsom popped up. I'd heard his name come up before but didn't really know much about him.

Turns out that Bobo Newsom was a heck of a colorful character. He pitched for twenty years beginning in 1929 and 1930 with cups of coffee in Brooklyn. After an inning with the Cubs in 1932 and 30 win minor league season(!) Bobo found himself in a starting role with the St. Louis Browns in '34. And as such he faced the Yankees six times that year, five starts and a relief appearance. In those games Ruth was in the line-up for the Bombers four times and he went 4 for 14 off Bobo, all of his hits being singles.

In 1935 Ruth was playing out the string with one last early season fling in Boston with the Bees (Braves) and Bobo was still in the AL with the Browns so the two never again faced each other in a regular game. Newson's best days were perhaps his Tiger seasons in the early 40's. In the 1940 World Series against Cincinnati he pitched and won Games One and Five and then went out and lost a tough 2-1 decision to the Reds in the decisive Game Seven.

Newsom kicked around the majors through 1948 while putting together both 20 win and 20 loss seasons here and there. He spent the 1949 through 1951 seasons in the minors and operating a drive-in diner and then returned to the majors in 1952 and '53 with the Nats and A's.

Turns out he didn't have a card in the 1952 set but he returned to cardboard acclaim as part of the 1953 Topps offering. So he wasn't part of my personal "52 Topps guys+Babe Ruth" subset but was interesting as hell and he DID face Ruth.

I went hunting and found a bunch of Newson's '53 cards online and picked up this one for next to nothing. It's off center (ok, seriously off-center) but it's otherwise a beauty. Bobo looks like he'd be a million laughs at a party, doesn't he?

Do yourself a favor and read his SABR bio. Turns out 'Bobo' wasn't just his nickname, it was what he called just about everyone else. He worked as part of the Orioles broadcasting crew in the mid '50s and appeared on a pair of the Esskay Meats cards distributed at that time. I found a few pics online. Here is one of them. Once again Bobo has that twinkle in his eye! These are well outta my price range I'm sure. Too bad. 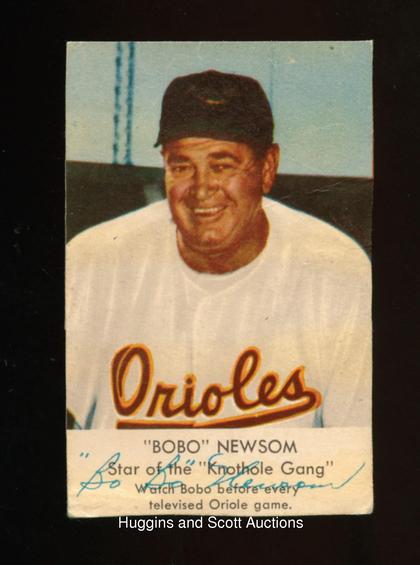 *=I believe the answer is three, Dutch Leonard who pitched for the Dodgers in 1935 but didn't face Ruth, Al Benton who faced Ruth in four games as a pitcher for the Athletics in 1934 and Newsom. Several other guys came close. Johnny Mize debuted the season after Ruth retired as did a few others.