I haven't posted much recently. One reason is that I've had a lot of projects going on, both in and out of the hobby. Another is lack of having anything new arrive in my mailbox of interest to anyone but me. But I'll press on with a couple of Billy Pierce items that I've acquired in the last few weeks. 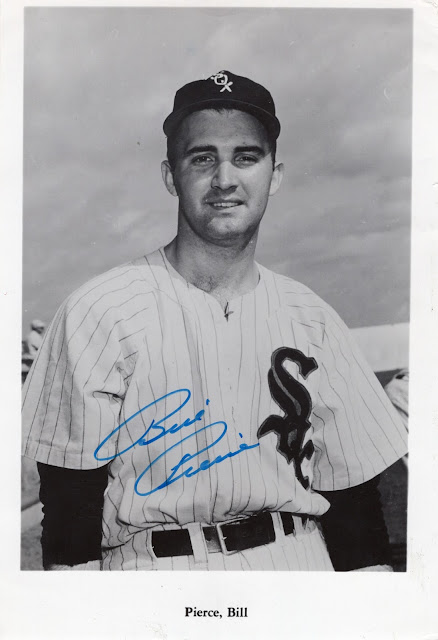 First up is a 5x7 photo. Pierce's sigs are always plentiful so a signed photo doesn't cost much more than an unsigned one. I'd have picked this up either way as it's a new item for my collection. My other 5x7's are 'photo pack' pictures that were sold in and around stadiums and through the mail. This one was billed as a 'team issue'. I'm not sure of the origin but it is new to me in that the typography is different than most I've come across. Plus I don't have one with this pose as far as I recall. (One of my projects is re-organizing my PCs and I haven't gotten around to BP quite yet).

This next piece is a dupe. It's from a 1982 Yankee yearbook insert set that was designed by TCMA. It's done in '51 Bowman style and I got it because it was cheap and a signed version will be better than an unsigned one in my Pierce binder. 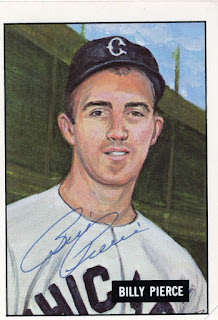 These things were hand cut for better or worse. 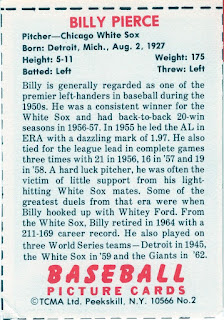 I've also added about four Archives/Heritage/Lineage/Tribute Pierce cards issued by Topps between 2001 and 2011. I don't know how player collectors can keep up with all the 'stuff' that was churned out in those sets. Honestly it all gives me eyestrain and a headache. I'll post them when I get them figured out. Wish me luck.