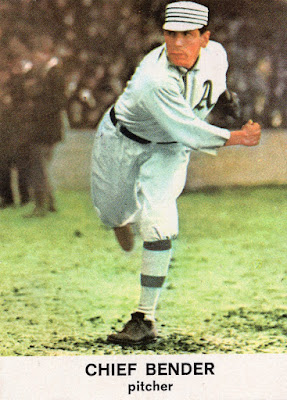 This Golden Press Chief Bender is what I call a 'PC tweener'. The 1961 Golden Press Hall of Fame set which was issued as a book with the cards inside and perforated. Intact books are not very common and in decent shape run over $200 for the most part. I've had some on my watch list but never pulled the trigger. If I'm going to spend that on any one item it will be a vintage Bender or a Billy Pierce '59 Bazooka.

By 'tweener' I mean it was from a set from between his career years and before Topps flooded their sets with old time guys on modern base cards. Things like the Kelloggs' Hall of Fame set falls into the same category. Bender, like many early century Hall of Fame guys has a lot of these types of cards. His include the 1950 Callahan set and 1960 Fleer to mention a few. I'm slowly adding these to my Bender PC. I have a 1940 Play Ball Bender en-route. That would qualify as a 'tweener' as well I suppose.

My scanner cleaned up the front of this card to the point that it smoothed out the perforated edges. But you can see them on the scan of the back. 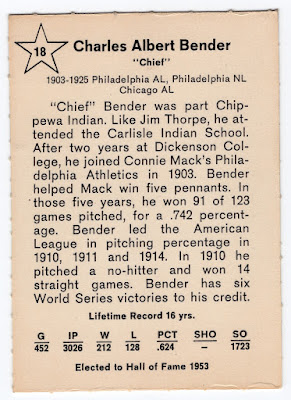 The Golden Press book contained 33 cards. Sports Collector's Daily has a nice write-up and pics of the book itself.
Posted by Commishbob at 1:26 PM