About a week or so ago a couple of eBay purchases arrived in my mailbox together. Both were one card purchases. Both had something in common....each seller used interesting stuff to 'pad' the envelope.

One of my purchased cards was a Gordie Howe O-Pee-Chee from the late 60s that I'll do a post on soon enough. The other was a '58 Richie Ashburn that I grabbed as an upgrade for my set.

One dealer (I can't recall which was which) used six 2017 GQ's to fill out one of those oversized card bags. Funny thing is I needed a Gsellman card for my fantasy binder. I think I already sent the Seager card to a Dodger collector and deGrom is headed out as well. I sort of half-assedly collect Cutch. Maybe 'collect' is not the right term. I just kind of 'save' Cutch cards I find in packs, etc. The guy sent me two of them which is cool. If someone wants a GQ Cutch lemme know.

The other dealer used two thick as hell football cards and lots of tape along with three card protectors in his package. Both of these cards would go into my football fantasy league binder if they weren't the thickness of about three or four normal cards. That Calvin Johnson is a really a great looking one. 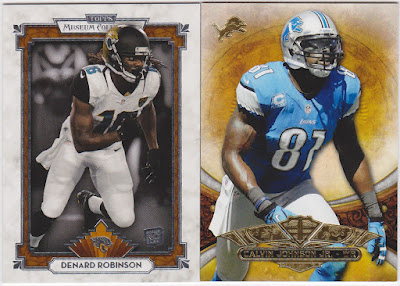 It's fairly common to receive an extra card from some eBay sellers. These are probably the only ones I've ever received that actually were worth getting.

Posted by Commishbob at 9:21 PM