Tony Horton and the best day ever! 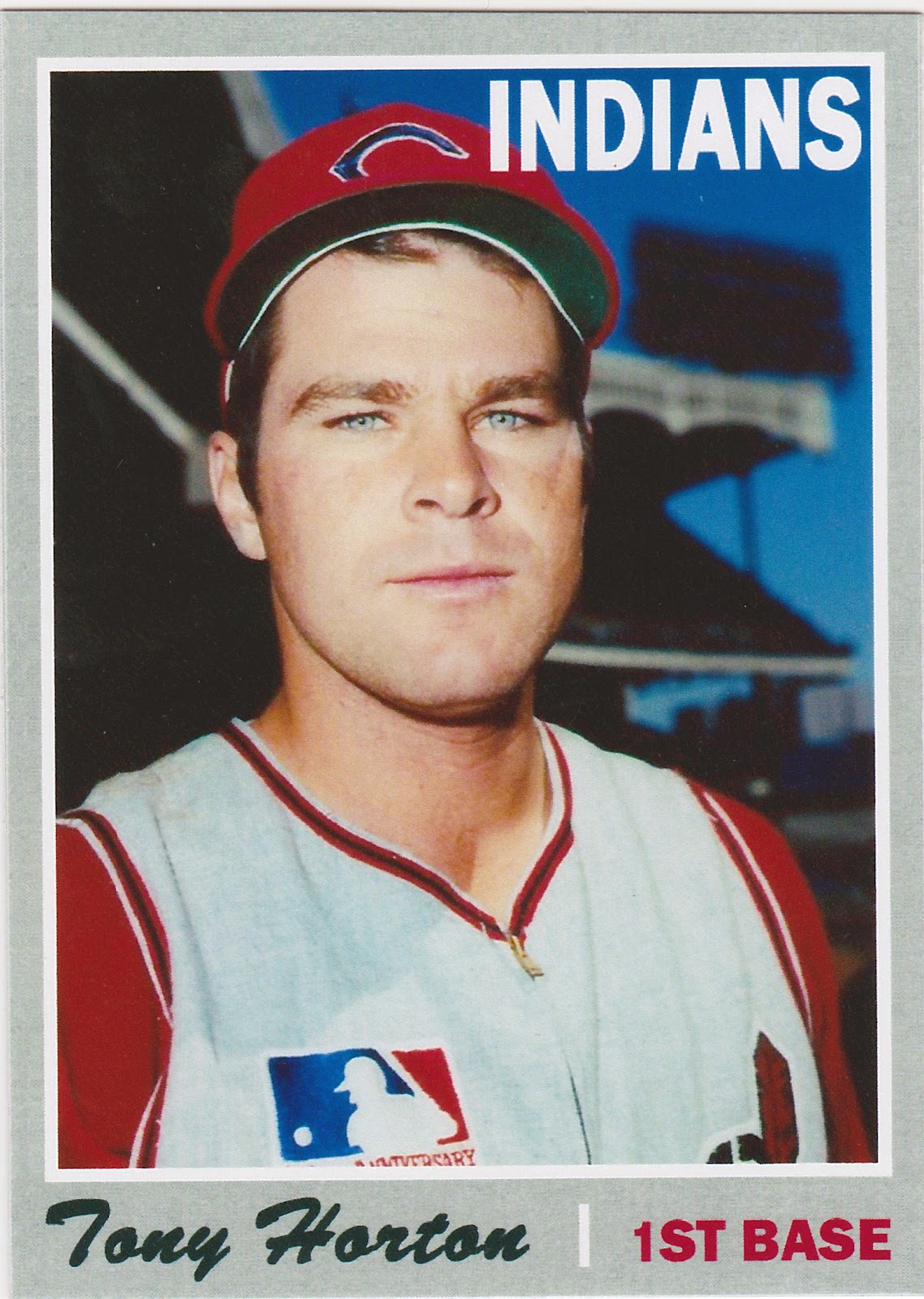 I've always been fascinated by Tony Horton's story. I could never understand how a guy with his talent could be so troubled. But over time I've come to learn more about depression and mental illness and his career is easier to put into perspective.

He never had a Topps card, just some regional and food issues and such. Bob Lemke, who's blog is one of my absolute must reads, does custom cards and took on the task of filling in some missing Topps Horton cards. You can see them here on this post from a couple of weeks back. He did three and all are outstanding. I had a few other Lemke creations already eyeballed and the Horton addition caused me to pull the trigger. I chose the '1970' version because it shows him as I remember him, as an Indian in Yankee Stadium. My cards arrived this week and they are as nice as I expected.

The other Lemke cards are of Baltimore Colts and they make a nice 'supplement' to my Colts' Project. I'll blog them as part of my wrap-up to that deal. Meanwhile, check out the back of the Horton, quality stuff. 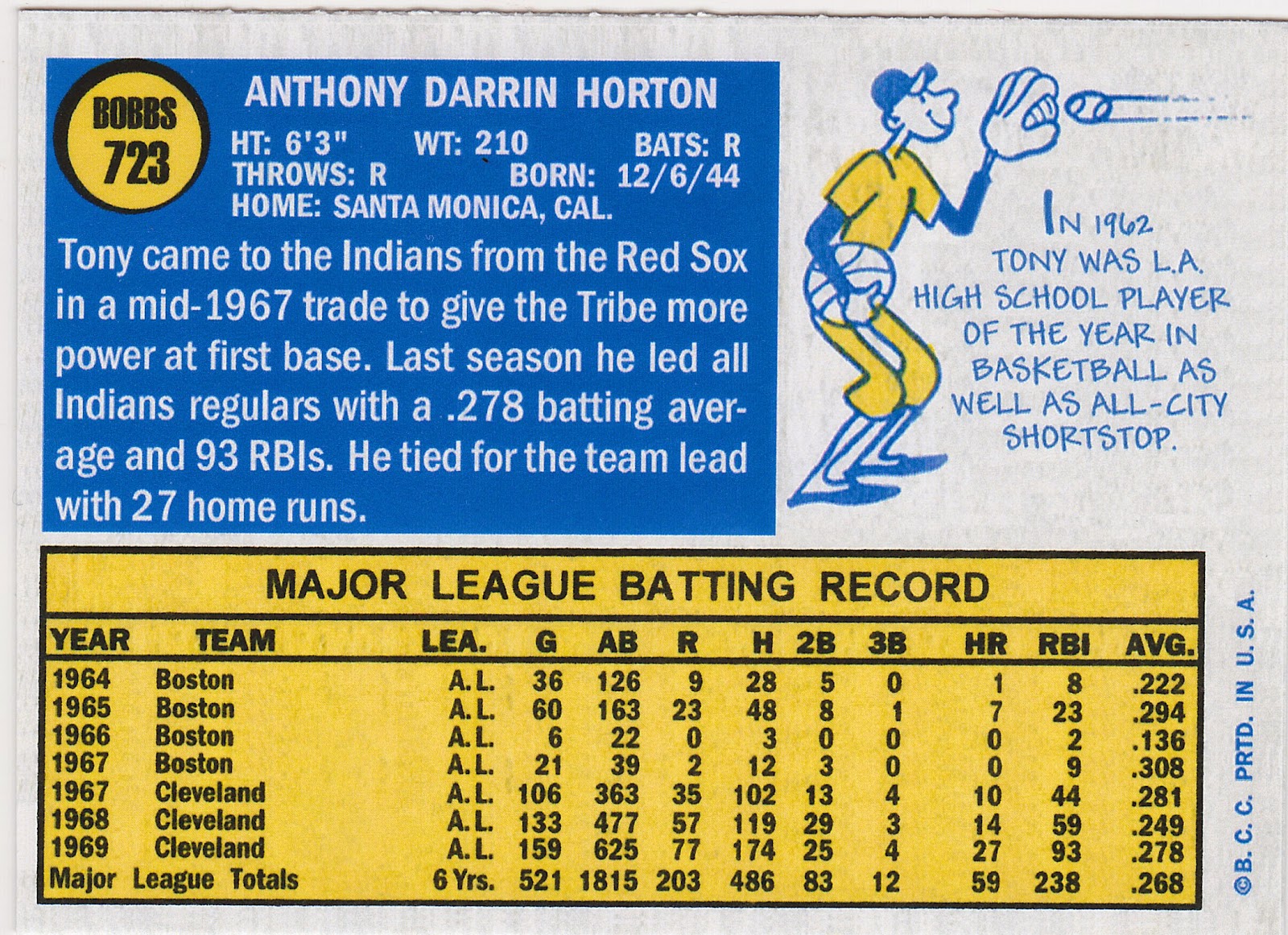 But back to Tony Horton himself. I may have written this story before but I don't see it in this blog's archive so it was probably a comment on someone else's. He plays a central role in what is my all-time favorite day at a ballpark.

Back in 1970 I'd just graduated from high school and was about to move to Houston and head off to college. I went with my best friend to what we thought was going to be a routine mid-week doubleheader at Yankee Stadium. The Indians were in town and since I'd inherited my father's love for two-for-one ballgames we headed to the Bronx.

Knocking around Manhattan, grabbing the #4 line uptown, visiting Manny's Baseball Land and then that games themselves, well that was a great time every time. But June 24, 1970 was going to be extra special.

We always sat somewhere down near third base in the lower stands since we'd made 'friends' with an usher who usually got us a nice view for the price of our grandstand ticket and a small tip. And that day it was especially nice to have the view from behind the Indians' dugout.

Several things came together to make that day more than just a long day at the ballpark. In the first game we got to watch Sam McDowell handle the Yankees pretty easily and that was neat because we were fans of the Indian's ace.

It was fun watching McDowell work but what happened in the ninth is what made the game memorable. Yankee reliever Steve Hamilton had been playing around with a 'bloop' pitch he called the 'Folly Floater'. Facing Tony Horton to lead off the Indians' ninth he threw a floater that was fouled back. Horton asked for another one, Hamilton obliged and it was fouled off to the left and Thurman Munson made a nice play to snag it. Horton dropped to his knees as he approached his dugout and crawled the rest of the way to the steps. I'd never seen anything like that before.

Here is the 1969 Topps Hamilton I picked up at the card show two weeks ago. It's uses the same photo as his '64 Topps card. 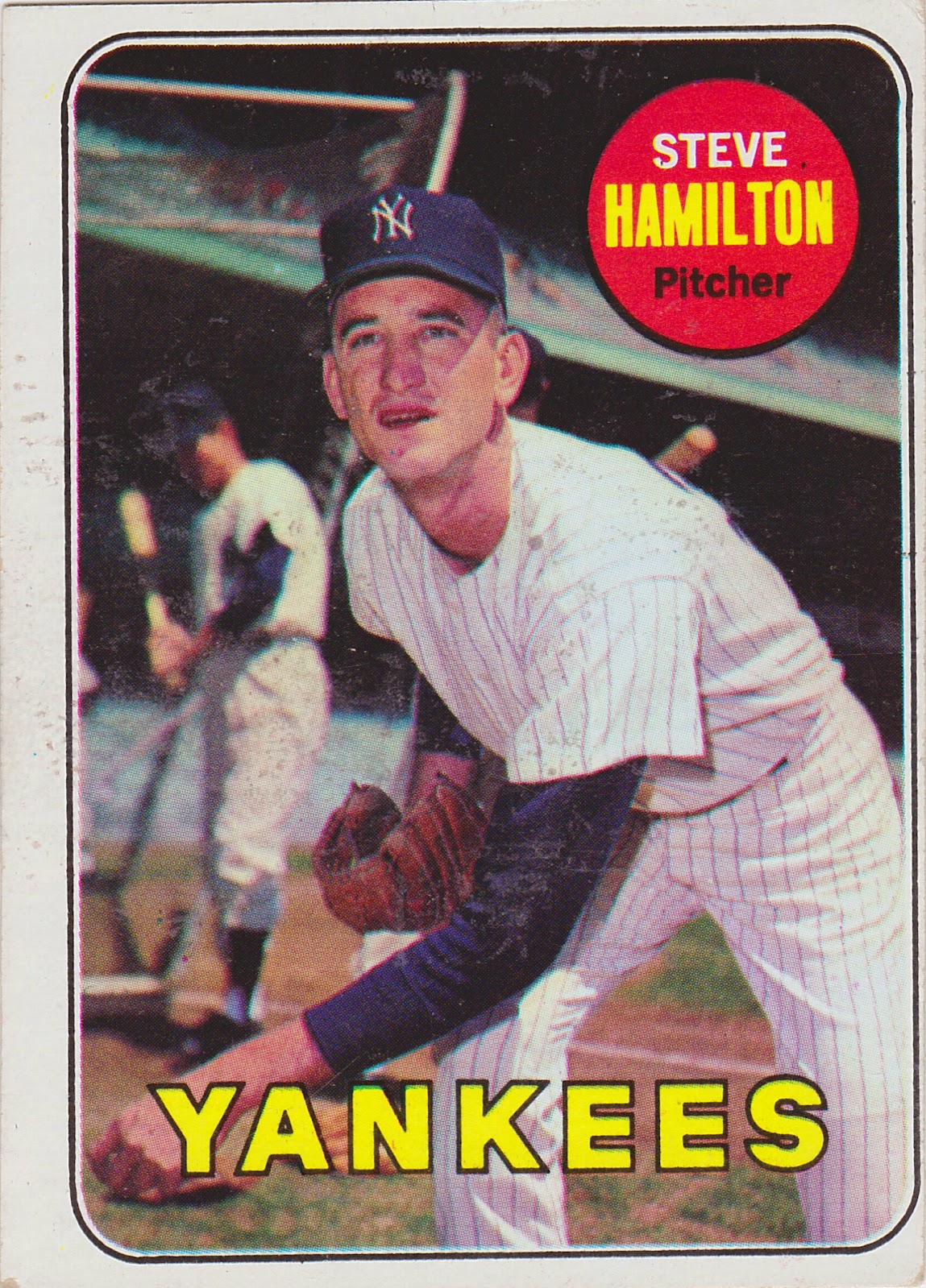 This video (sometimes I just love YouTube!) is of that very at bat with Phil Rizzuto calling the action. My buddy and I are likely visible in that grainy crowd behind the dugout. No way to tell.


The second game of the double header was nuttier than the first! Bobby Murcer, who had homered in the bottom of the ninth in the first game hit three more in the second one for a what I believe was a record-tying four homers in four consecutive official at bats. He managed to draw a walk in the middle of them.

And we witnessed the best baseball fight I've seen in person. In the top of the fifth with the Indians leading 2-1 and one man out Vada Pinson singles, goes to second on a ground out and then, when Stan Bahnsen uncorks a wild pitch, tries to score all the way from second. Bahnsen, covering home tags Pinson out with has glove to the face and Pinson came up swinging. Everyone piled out onto the field and lots of shoving and bear-hugging ensued. The haymaker from Pinson is one of the few really good punches I've ever see land in a baseball fight. I remember that we were surprised Bahnsen was back on the mound for the sixth. Pinson, btw, got tossed.

Not long after that some chump in the upper deck tossed a large firecracker, probably a 'cherry bomb', onto the field and it landed near home plate. I remember Ray Fosse jumping about as high as a catcher could jump when the thing exploded nearby. I've read since then that he was burned by the thing but I really don't remember that. I just remember the Yankee PA guy, Bob Sheppard warning the fans that the game would end if any more objects were thrown onto the field.

Two other notes on this game.....while digging for newspaper accounts of the game I discovered that the 1971 Vada Pinson card has a photo taken during Game One that day. It shows Pinson being tagged out at home by Munson when he tried to score on a fly out, ending the eighth inning. Oh, the irony..... 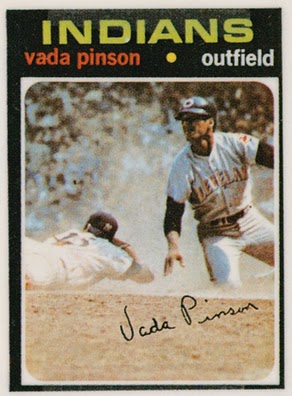 ...And I recently came across a web page for long time major league reliever Lindy McDaniel. He was a member of the Yankees in 1970 when these games and another great game, one played in Baltimore between the Yanks and Orioles occurred.  He signs through the mail so I sent him a card and asked him if he had some memories of that summer. I'll post that when he returns it.
Posted by Commishbob at 9:25 AM