I Need This Card!! 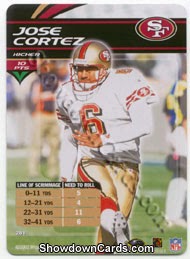 Yes, whatever it is, I need it. And I'm willing to pay dearly for it!

While researching one of my Monday Morning Quarterback posts I was looking through old transaction logs for my fantasy team and the name Jose Cortez popped at me. He was a 49ers kicker in 2001 when I made a trade that included him as a throw in. I actually started the guy a couple of times.

The problem was I didn't recall seeing a card on him in my fantasy football binder. I checked and sure enough, no Cortez card. For years I've been under the assumption that I had some sort of card for every player I've ever rostered. Some of those cards are homebrews for guys who never had a real one, some are unlicensed custom cards made for suckers like me. But if a guy had a card, even if it was a college card, I had him in my binder.

But I have no Jose Cortex card. This is unacceptable. I did a quick check and didn't find any card for him so I figured I'd just throw one together. But a second search found the card you see up top. It's a 2003 NFL Showdown card, whatever that is. Now the Showdown Card site apparently sells these things and the Cortez is listed for $2. But it's also listed as 'sold out'!?! {See EDIT below} But you can sign up to be on the waiting list. So I did, for whatever that's worth.

It would actually be much better if there was no legit Jose Cortez card as then I could make one and feel like my binder is complete. But with an actual card out there, obscure though it might be, I have an obligation to track it down.

It's a new white whale! The Billy Pierce '59 Bazooka will just have to wait. I won't rest until the 2003 NFL Showdown #281 Jose Cortez card is in my fantasy football binder in the placekicker section. I will have this card some day. Count on it.

EDIT: After writing this post on Saturday I found this page. It seem Jose Cortez went on to a career in law enforcement after his football days but got himself canned for improper conduct on the job. Could that be why his card has 'dried up'?

OMG... EDIT #2: Apparently I'm not the only blogger who had this card in their sights! I found this post from Spastik Mooss detailing his quest for the same card. And he had more info which might help me. The Showdown cards were made by a game card company. And maybe 2002, not 2003. Live and learn.
Posted by Commishbob at 7:30 AM