Space Cards, G-Men ...and other weirdness

My Net54 grab-bag purchase and latest hotel show scrounging yielded some stuff I had no business adding to my collection. But it's some fun stuff and post-worthy (I guess).

These first two cards are from the 1957/58 Topps Space Card set. I had never seen these. A little digging turned up the fact that these cards, 88 in all, were recycled for another set, Target: Moon somewhat later. The dates of issue for some of these non-sport sets are sometimes murky. The Topps Archives blog does a great job of researching this sort of thing. These were also re-issued in England through Topps' agreement with A&BC. Some were also included in repacks and promotional tie-ins as late as 1968. 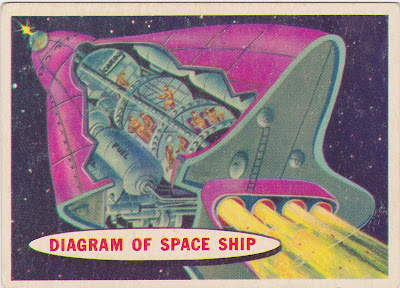 The artwork is uncredited as far as I can tell. I saw a Topps mainstay, Norm Saunders, credited for these on at least one reference page but checking Mr. Saunders' website finds no mention of them. 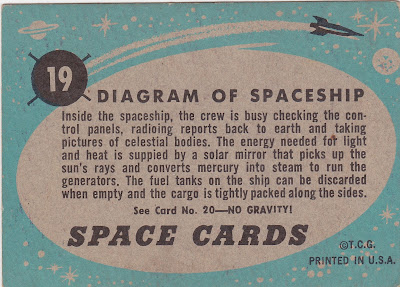 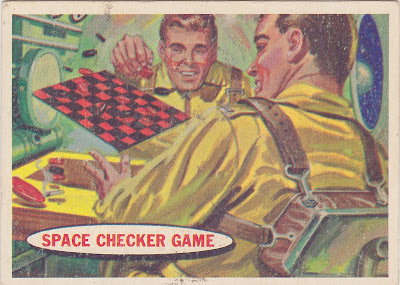 This is a fun one..astronauts playing checkers in space. Well, OK then. 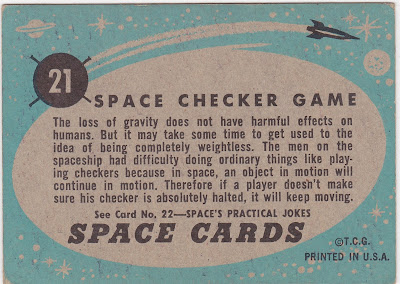 Just for grins, I checked to see what putting this set together would cost, or if it was readily available already completed. Lots of listings for singles on eBay at prices from about $4 and up. One complete set, from a British seller, for over $450. I think I'll just enjoy these two in my non-sports binder.

And speaking of tough to put together...check out these next two cards. They are from the 1936 G-Men and Heroes of the Law set. 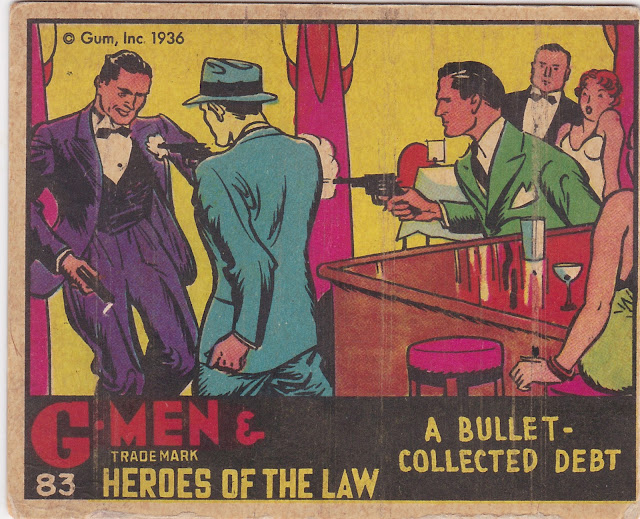 Gum, Inc. (aka Bowman) issued these as a skip-numbered (and probably unfinished) set of 168 cards. The card numbers run into the 400s. Some background and the known checklist is available here. 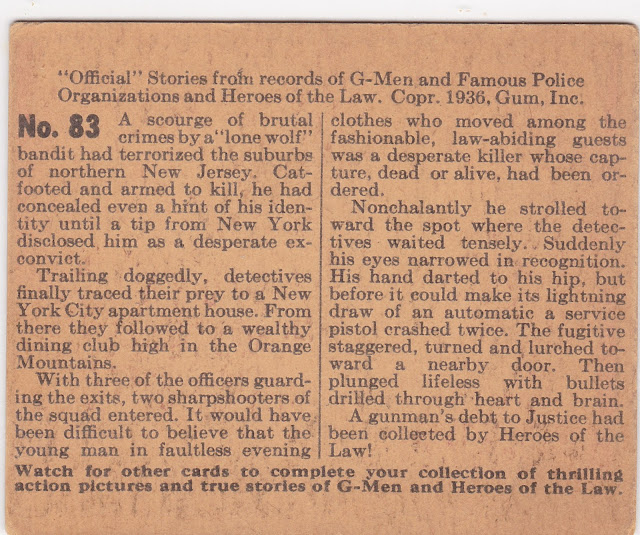 I blew these up so the backs could be read here. That's about as much text as I've ever seen on a card. 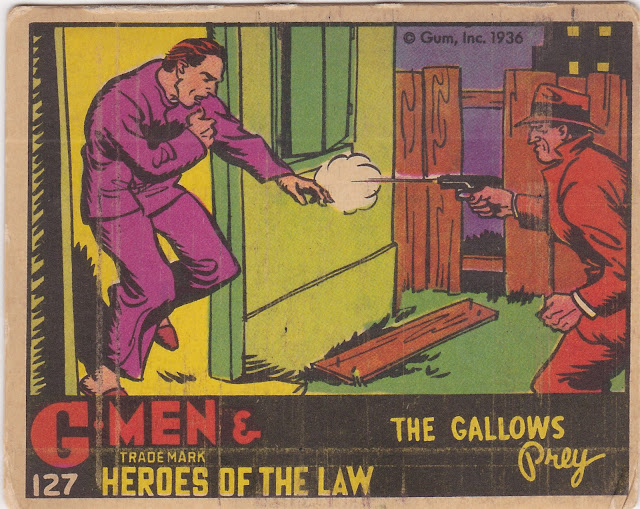 I'd guess that these were done to jump on the popularity of the Dick Tracy comic strip which premiered in the early 1930s. This page has a link to a slideshow of the whole set. 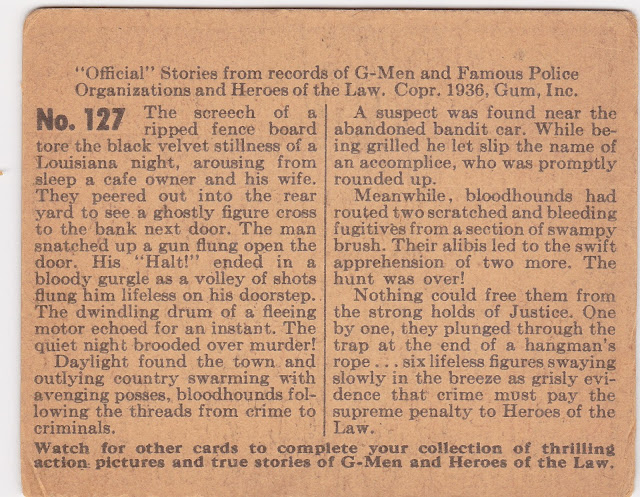 You can get a better idea of the size of these with this scan I did of one next to a standard Topps card. 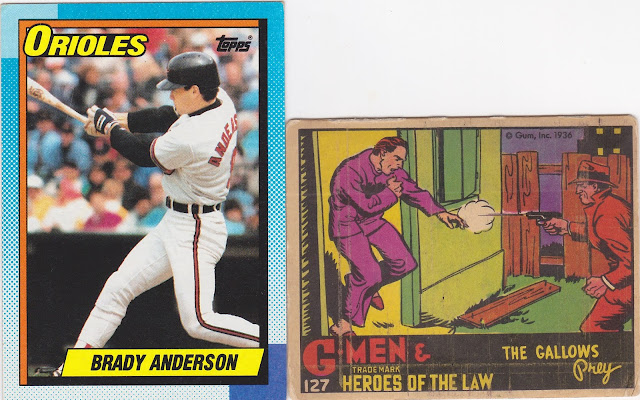 Haven't had enough of guys with guns? My dealer and friend Daryll had a stack of The Man From U.N.C.L.E. cards in his non-sports box. I picked out a couple of Robert Vaughn examples. This is the best of the bunch. 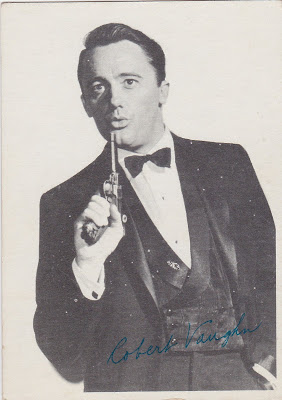 I really enjoyed that show back in the day. But it wasn't my favorite...that honor goes to Combat!  I've posted a few of these cards previously but I think these two capture the main characters best: 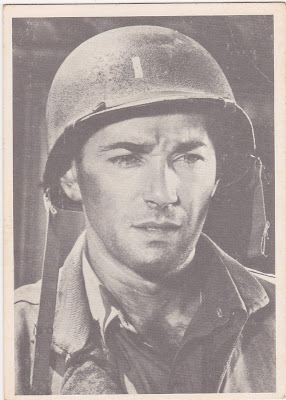 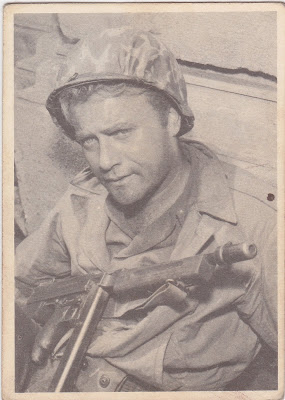 Like everything else we enjoyed, my friends and I had debates on which character was 'the best' in the show. I was a Hanley devotee. Sadly, both actors died tragically.

I'm still not done with the oddballs. But I'll mix in a few baseball posts so both regular readers don't completely abandon ship.
Posted by Commishbob at 12:47 PM