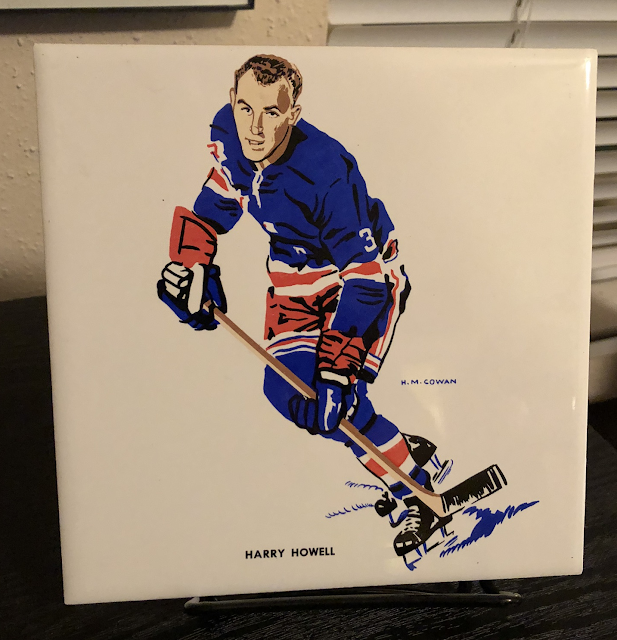 I grew up among Rangers fans. All my friends, no matter their baseball or football loyalties, loved the Blueshirts. And we all had our favorite players. I idolized Eddie Giacomin, my two closest pals were Rod Gilbert devotees. But I never remember anyone claiming Harry Howell as his favorite. Howell was not flashy. Most blue line guys back then usually stayed back, rarely getting involved in the rush so they didn't score much. (Bobby Orr changed all that.) They were defencemen and they played mostly, well, defense. Howell was my father's favorite Ranger. If you had known my father that fact would not surprise you.

I had one brush with Harry Howell and it happened when he ventured into the WHA after 17 seasons with the Rangers. He was playing for the NY/NJ Golden Blades (or maybe it was the Knights) and they came through Houston to play the Aeros. As usual, my snowbird college buddies and I would make our way down to the concourse of the old Houston Coliseum before the game and during intermissions to watch the players tromp back and forth from the ice to the locker rooms. They had to come right through the crowd 'walking' on a rubber mat and protected by a rope held by security guards. It was not unlike what happens when pro golfers exit a green to make their way to the next tee box. Anyway, on this night I wore my Rangers tee and when Howell passed by I said something witty like "Hi, Harry!".  I remember that he replied, "Hey, Rangers" and moved on by.

All that is a too long introduction to the item at the top. It's a 6"x6" ceramic tile from a group known as H.M. Cowan/Screenart Hockey Tiles. They are a 1962/63 item that has a very murky history. Supposedly, and I only found one source of info (and no checklist), they were designed with the intention of being souvenirs to be sold in NHL arenas. But they were unlicensed and the project never got very far. Most (again, supposedly) were destroyed but obviously, some have survived and are neat little period pieces. The tiles depicted players and coaches from the six franchises in existence at that time. The number of different tiles is estimated at 104 but that's just someone's guess. I've been poking around eBay and auction sites and have seen about six different Rangers on these things, including Gump Worsley (a tile I'd give my right arm for).

I was completely unaware of these until the February TriStar show. I spotted a couple of Ranger's tiles (Howell and Dave Balon) in a case on a table near the front. They were listed at $150 each. The dealer(s) who manned those tables had nothing but rare and fascinating oddball items. They had one display case filled with loads of unusual Roberto Clemente items. Another case has Topps rarities and test issues from the 50s, 60s, and 70s. Crazy rare stuff like the '68 Plaks, the '67 Punchouts and on and on. They also had zero interest in chatting with a schlub like me dressed in a Baltimore Colts tee-shirt and Ping cap. I stood around for quite a while as they dealt with neighboring dealers, a guy with a briefcase of graded cards and their cell phones. Meanwhile, I had $150 in cash in my hand waiting to get their attention.

Finally, I gave up and figured I'd come back later when they were not quite so busy. But the tiles had me hooked. I went and sat down and pulled out my phone to find out exactly what I had been looking for. After a few minutes I had a decent amount of info and on a whim I checked eBay. Well, what do you know? I found a guy selling the Howell tiles for about one-third of what the Snooty Table© dealers were asking. I bought it without a second's hesitation. Even the $15C shipping didn't faze me...heck that's just $10 American! 😏


For the curious, here is the back of the tile. 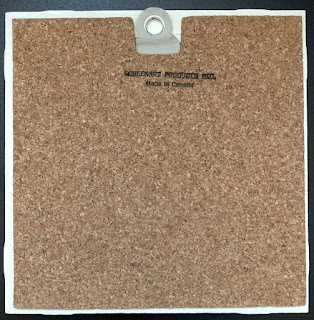 So, there it is. A great Rangers display piece now on my shelves. Oh, and I spent the money I saved with other, more appreciative dealers. Not all of it there at TriStar but a week later with my dealer friend at his hotel show. His ever-rotating cheap crap boxes featured some hockey and I was happy to dig these cards up: 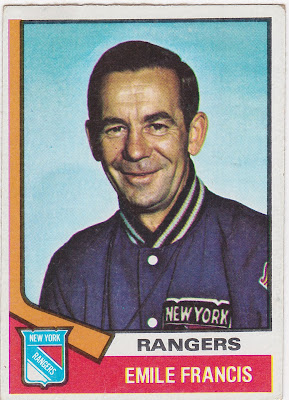 I've already made this post far too long so I won't comment on each card very much. But I have to say that I hated Ken Hodge with the searing heat of an exploding sun when he played for the Bruins. To see him in Rangers gear takes at least a month off my life. 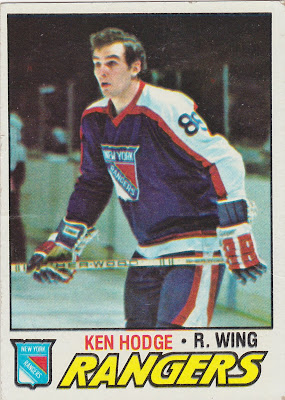 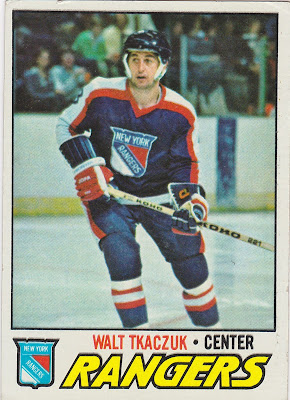 These Rangers' unis were almost enough to make me an Islanders fan.


No, not really, but I  consider them the worst mistake in team history. Given the Rangers legacy, that's saying a lot. 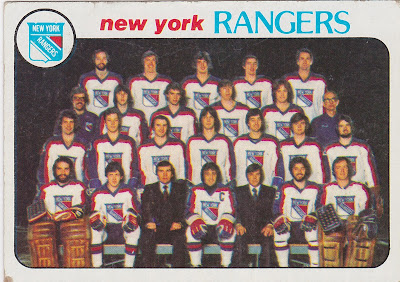 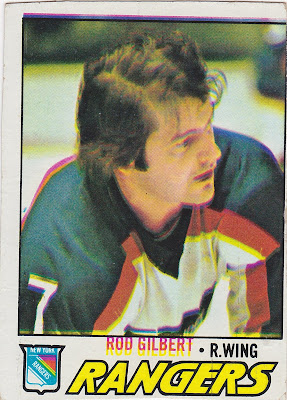 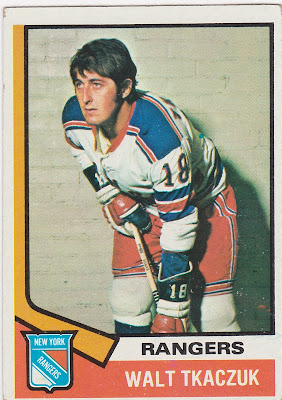 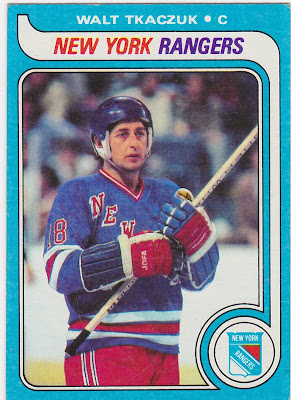 And finally, Eddie!! I told Darryl (a fellow Rangers fan from NJ) that this card should have been in his glass case instead of his quarter bin. 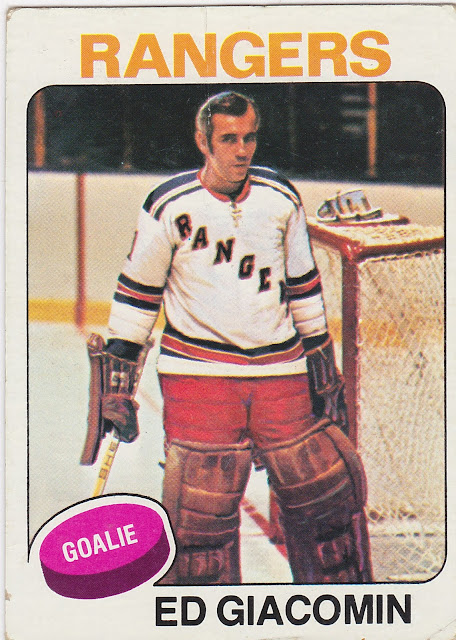 Posted by Commishbob at 1:06 AM