I was sorting my 1971s today, culling dupes, and getting ready to binder this thing when I came across the two Stan Bahnsen cards I owned.  Check them out..... 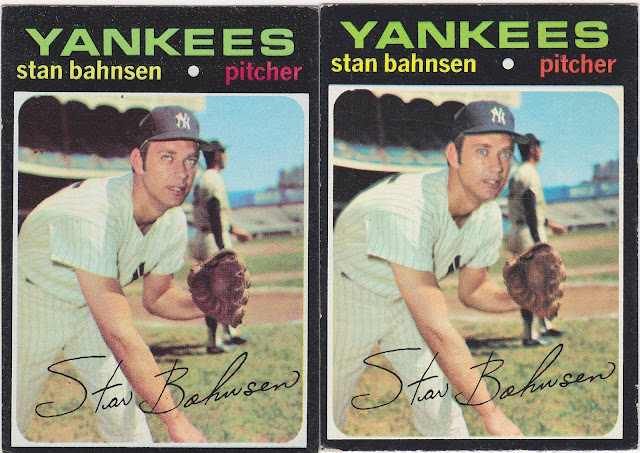 Notice anything?  Look at his eyes. On the card on the left he is looking skyward. On the other card he isn't. And it's obvious. What exactly is going on here? I can't find any reference to a Bahnsen variation online. Did Topps think having him looking up was somehow not attractive and had an artist 'fix' it? Or is it just the opposite? Did they want to improve the somewhat bug-eyed look and the artist did his best to change it?

It also crossed my mind that it was a case on my copy of one of these had been inked by some kid. But I looked at the cards using my jeweler's loupe and, while I'm no print process expert, it was obvious that neither card had been adulterated after coming out of the pack.

Blowing up the two sets of eyes gives much the same effect as using the loupe:

And it gets kind of weirder. I went to COMC and found dozens of copies of this card. Quite a few of them looked like this: 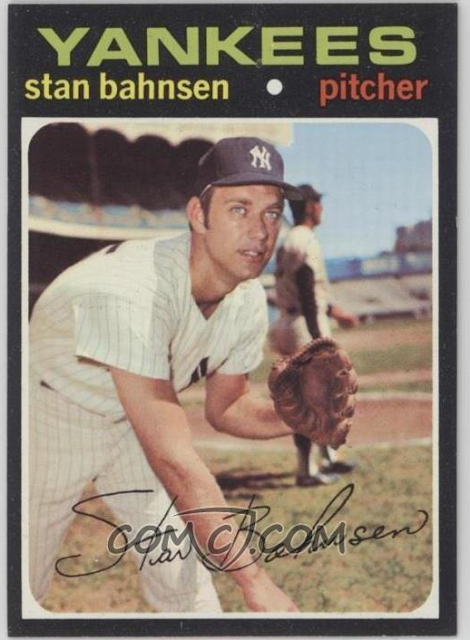 Am I nuts or does Bahnsen have brown eyes on this card? Here is a closer look. Obviously, I can't get the same dot pattern to show on a 'borrowed' pic from the web but even so...those eyes are not blue.

It's very possible that the third card has eyes that match the cards I have and the scan online is simply playing tricks on me. I'll be able to look closer at this copy because I went ahead and purchased it..in the interest of card science!

I looked at the back of both cards to see if there were any differences but, other than one having a crappy (and not unusual) 'off' tone, they were identical. My dealings with the '62 Green Tints prompted me to look at the photos for cropping differences. I guess it's possible that the printing plate was pulled and the card redone, sort of like the '62 second series was, but if so the tell-tale cropping differences are not apparent. At least to me. 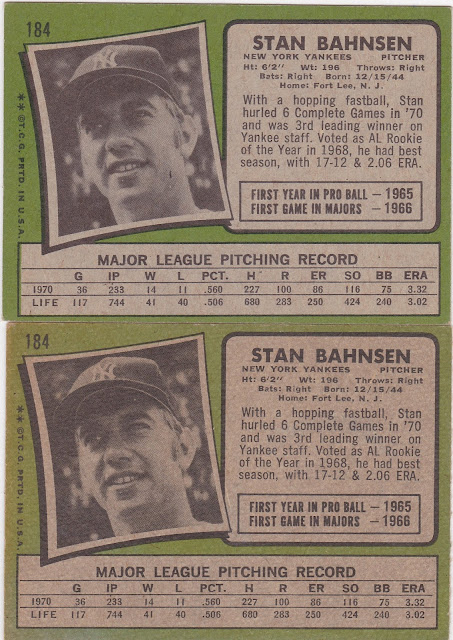 And I had one more idea. I checked Night Owl's 1971 blog to look at his copy of this card. (I hope that was OK, Greg.) It appears to be a match for the COMC example. Maybe in-hand ALL these cards will show Bahnsen with blue eyes. But even if that's true I'm still left wondering how/why Topps changed which way he was looking. 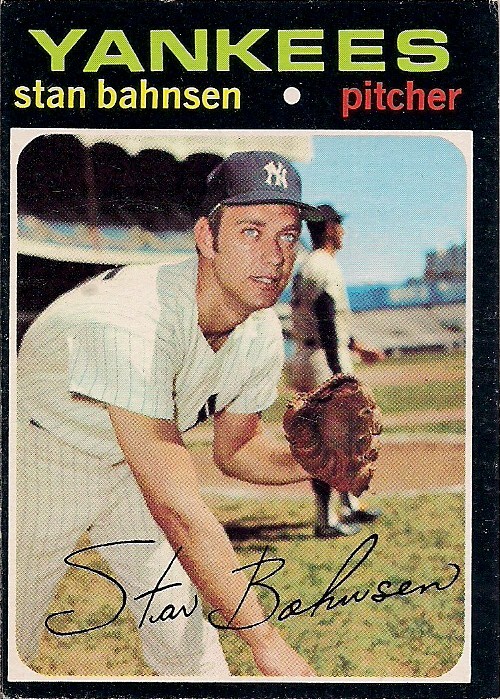 And a note to Night Owl...I'd bet good money that the player in the background is Fritz Peterson.
Posted by Commishbob at 10:49 PM