Here are a couple more of my recent 'grab-bag' vintage pick-ups. Neat cards in so-so condition. I have a few cards from the 1948 Bowman set but Bobby Thomson is the first 'name' player I own. This is his rookie card and this was Bowman's 'rookie' effort in the production of baseball cards. 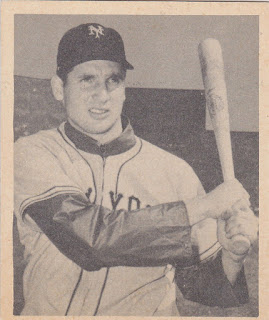 Bobby Thomson is known to every baseball fan for his 'Shot Heard 'Round The World' off Ralph Branca which won the 1951 pennant in a playoff over the Dodgers. 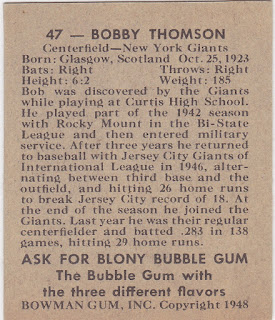 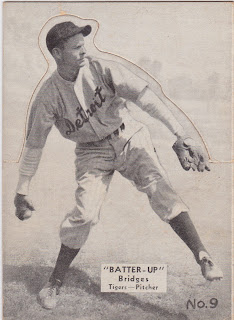 EDIT: This was posted while I waited for the park-and-ride shuttle last night and was an early and incomplete version. I had a paragraph on Tigers' pitcher Tommy Bridges which didn't make it in. LOL I'll fix that now....

Tommy Bridges pitched 16 seasons in the majors, all for Detroit, The last two were abbreviated stints after he did his WWII military service. While he was a full time starter Bridges was a workhorse who led the league in wins, shutouts and strikeouts at various times. He fell just short of 200 wins and was a six-time All-Star.

He was a part of two Tigers Series titles and four AL championships. Here is something from Wikipedia related to the Tigers' championship 1935 season:


Bridges had another strong season in 1935, going 21–10 with 23 complete games. He also pitched a complete game victory in the last game of the 1935 World Series. With the score tied 3–3 in the top of the ninth, Bridges gave up a leadoff triple to Stan Hack, but retired the next three batters without the runner on third scoring. In the bottom of the ninth, Goose Goslin drove in the winning run with two outs, and the Tigers won their first championship. After the game, manager Mickey Cochrane said the following of Bridge's gutsy performance:

"A hundred and fifty pounds of courage. If there ever is a payoff on courage, this little 150 pound pitcher is the greatest World Series hero."

In a nationwide poll Bridges was named the No. 2 sports hero of 1935, behind Notre Dame football player Andy Pilney.

This is the first Batter-Up card in my collection.
Posted by Commishbob at 2:45 AM