I stuck my nose into someone else's Twitter thread the other day when the subject of buying a nice vintage card came up.

I tossed out the idea of getting a '53 Bowman and did so by posting my Stan Musial in the thread. Hell, I'll put it here again because I love it so much. My blog post on this card from earlier this year had some of my other '53 Color Bowmans. Click and scroll if you want to. 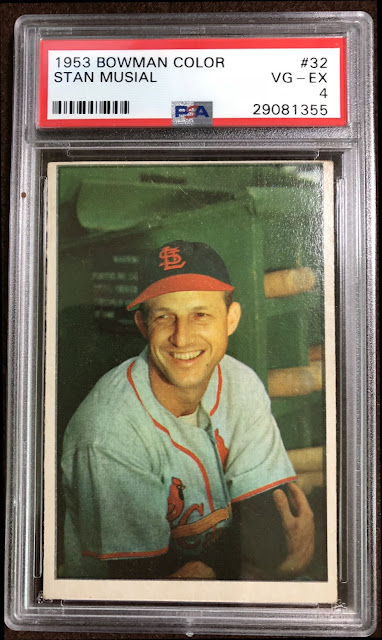 I was reminded that I had some new additions to my '53 Bowman Color collection that I have scanned but not posted. These came (if memory serves) as part of a group of miscellaneous and oddball stuff I bought in a sale benefiting a dog rescue group. 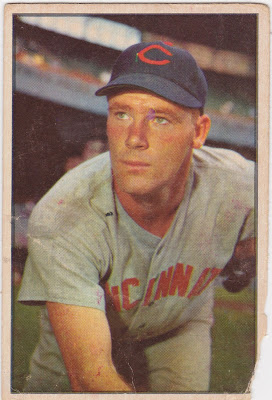 That is Herman Wehmeier above with the chewed up corner. I didn't scan the back but his makes note of the fact that he's a 'hometown boy' having been born in Cincinnati. That's the Polo Grounds he's in. You can see the apartment buildings that were behind the third base side of the place through the openings in the walls of the upper deck.

Next up, Lou Kretlow is posing in 'the big bahlpaak' as Red Barber called it with his Mississippi drawl back in the day. Kretlow was a Sooner who was signed by the Tigers and pitched for them, the Browns, Orioles and A's in addition to the White Sox. This page has a clip of him, Mickey Mantle and Joe Black playing in a Florida golf tournament for ballplayers. Kretlow appears at the end being interviewed as the winner. The whole clip lasts less than a minute. 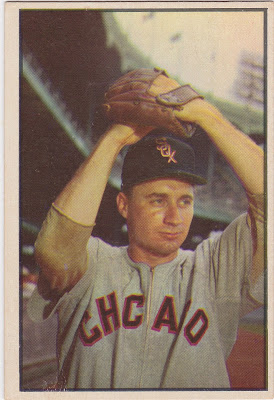 A last note on Kretlow. The back of the card mentions that he was 4-4 for the Sox in 1953 but adds that his ERA, "the best test of a pitcher's ability", was 2.96 and winning my old-school-stat heart.

Lastly we have the best known of the three pitchers, Joe Nuxhall. Nuxsie is, of course, well known as the youngest player to appear in a big league game. He was 15 when he debuted in 1944. The card speaks to that fact and adds that he returned to his high school team after that stint thus becoming "undoubtedly the only boy ever to play in the majors then to resume high school sports." Indeed. After his playing days he was a long-time radio broadcaster for the Reds. 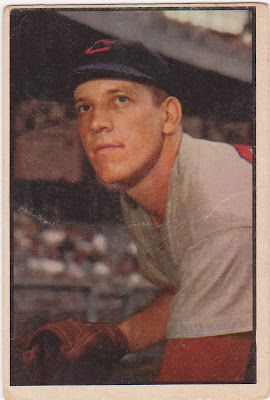 This is another great Polo Grounds posed shot.

If I ever hit the Texas Lottery (unlikely since I don't buy tickets) I'd find a nice, ungraded 1953 Bowman Color set and have the time of my life putting it in pages. Other than that I'd never attempt to chase it. That wonderful Mickey Mantle card will never otherwise be within my reach. And I'm not chasing a set I can't finish.
Posted by Commishbob at 9:51 PM