And Our Long National Nightmare... 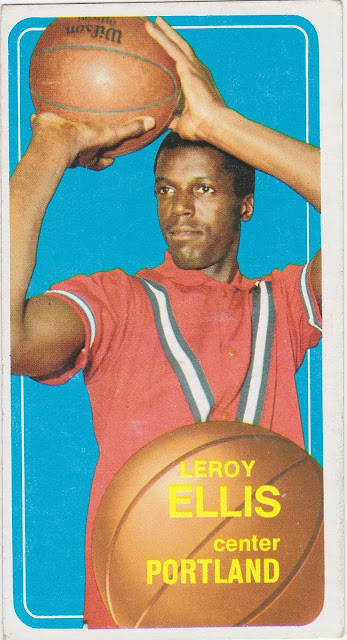 ...is over! Leroy Ellis, newly minted (in 1970) Portland Trailblazers pivot, had an eventful trip (in cardboard form) from North Carolina to my house recently. Ellis' card was the last I needed for my 1970-71 Topps basketball set. It was one of several SPs that finally dipped into my price range in the last few months.

My patience paid off when I found one at a really nice price on eBay. It was even bundled with a second card (Hi Earl!) at a cost below what I had been seeing online for just the Ellis card. So I grabbed it. Weeks went by and then I received a note from the seller..."Your package came back as 'undeliverable, no known forwarding address' ".

That was pretty weird considering I've lived in the same house since 1983. But the seller, HomePlateCards, said they would resend and refused to let me at least help with the re-shipping. A couple of days later I had Leroy Ellis in hand and soon 'in binder' and another set is put to bed.

Leroy Ellis was a durable, quick center for a decade and a half in the NBA. He averaged 8 rebounds and just under ten points a game. He was never an All-Star but you don't play that long without skills. That card shows him in his Bullets warmups.

The second card, of Earl the Pearl Monroe, isn't an upgrade on the one in my set already but it'll find a spot in my 'favorite hoops guys' binder. He was fun to watch with his head fakes and spin moves. 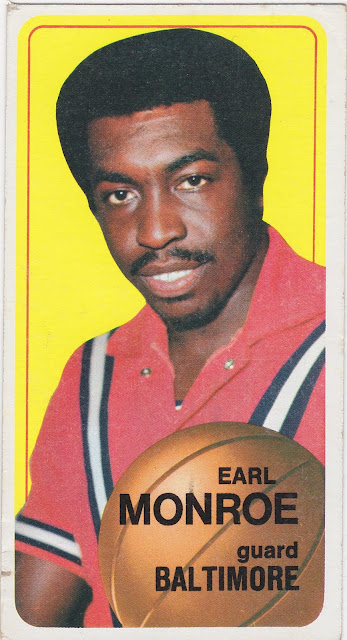 I'm expecting the final card from the other set I've been actively chasing to arrive in a day or so. That one will be the case for more celebrating.

A little bit of Earl Monroe as the NBA season approaches: