One card...but it's a beauty

At least I think it's a beauty. Which is why I bought a card of a player I've never heard of from a set I'll never probably buy another card from.

It's a 1911 Obak cigarette T212 card of Los Angeles Angels outfielder Curt Bernard. And I don't know him from Adam. But that fairgrounds background is just fantastic. I chose it from a group of these because that painting is so well done.

This paragraph comes from Wikipedia (links theirs) and if it's correct I may know the park shown in the distance:

From 1903 through 1925, the team played at 15,000-seat Washington Park (also known as Chutes Park), just south of downtown Los Angeles. Both the team and the park were founded by James Furlong "Jim" Morley (1869–1940), an entrepreneur involved in bowling, prize fighting, billiards, and gemstones as well as baseball.

Assuming that is the Angels home stadium it's Chutes Park.The above Wiki passage isn't clear but the link makes it plain the Chutes Park was their home through the 1910 season and Washington Park is a different structure on the same grounds opened in 1911. 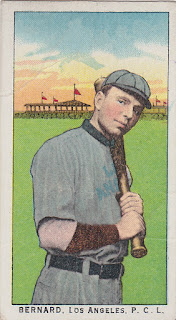 Barnard was about a decade removed from his two 20ish game runs with the New York Giants. The first coming in 1900 and he had another shot the following season. But his 15 year pro career was spent primarily in the minors and mostly in the PCL with Los Angeles.


The Cardboard Connection has a nice, concise article on the Obak cards which were issued over three years with each year's set having a distinctive back. This 1911 is part of the last Obak issue. Only PCL players appear on these. Back then the PCL was within spitting distance of being a third 'major' league. That CC article link above discusses that. 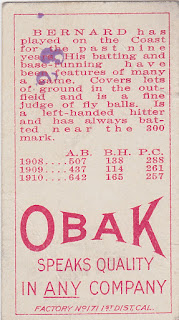 The red-backed 1911 group is the only one of the three to feature stats and a small write-up of the player on the front.

I wish I had the resources to go after more cigarette cards from this era. They are just wonderful pieces of history. I know not everyone is enthralled by them but I certainly am. My collection isn't very big. I have a couple dozen T206s, half that many T205s and a scattering of others. This is my first, and likely only, T212.
Posted by Commishbob at 11:21 AM