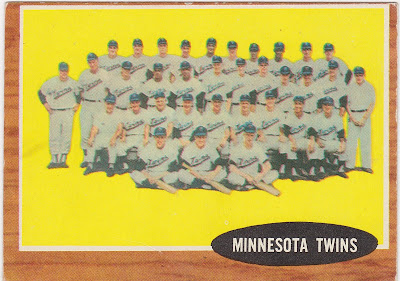 And there it is, the final card I needed for my 1962 Topps set build. It came from eBay via one of my slew of lowball snipes finally hitting. It's mis-cut (no surprise in this set) and the back has a blob of ink/glue/carbon/gunk/stamping on it. But for the price, I'll take it.

And speaking of the back...in the pre-stathead days, when wins mattered, one of the most fascinating things in the world for me was number-choked backs of team cards like this one. Jack Kralick was 4-1 versus KC but 1-3 against the Yanks? Pistol Pete Ramos lost 20 games? It was the sort of thing we made mental notes of  and used in our Whiffleball tournaments and stoop-ball games. 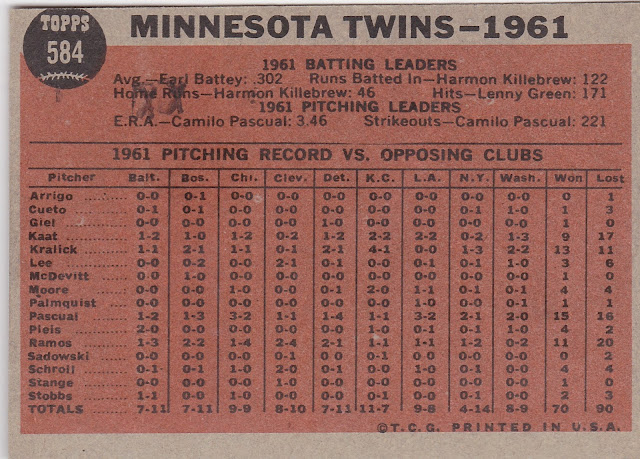 While it's the last card to be crossed off my needs list, it is NOT the final card that will go into the '62 binder. I have a couple of graded cards that I'm going to break out of their tombs soon. Over and above that is the reason this is going to be a rather long, drawn-out post.

The question of what makes up a 'complete' vintage set is one that pops up from time to time. I've seen it discussed on Twitter, Net54 and on blog posts. I've given it some thought as I build sets as well. Is a 'complete' set a 'master' set with every known corrected error and all the variations? Do you need all inserts, a wrapper? Or is a set 'complete' with one of each card number?

Trying to decide that for the 1962 set is far from simple. It's a fun and kind of crazy set to chase. It contains far more 'off the wall' weirdness than any other set of the era.

While building my 1959 set (first vintage chase) I came up with a 'rule' for myself. That set has no photo variations. But it is chock full of little and not so little errors/variations on the backs...wrong birth years, 'traded to' lines of text, stat anomalies, etc. Some were corrected, others not. I decided then that I would put together the set as the 'ten-year-old CommishBob' would. If it wasn't something I would have noticed as I was opening the pack, or when I was shuffling through my cigar box stash, well I wouldn't worry about it. 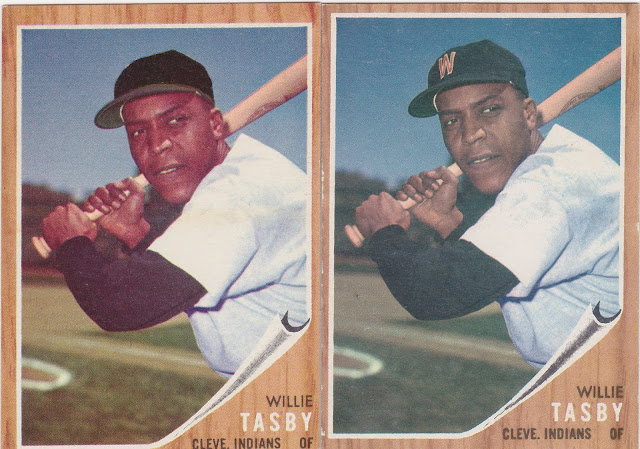 Example #1, the above Willie Tasby cards. On the left a card with Tasby's cap logo removed. On the right Tasby with a logo. The 10-year-old CommishBob would have noticed that and put both into his cigar box. So both go into the binder. The same would go for Bob Buhl who had logo'd and non-logo'd caps. 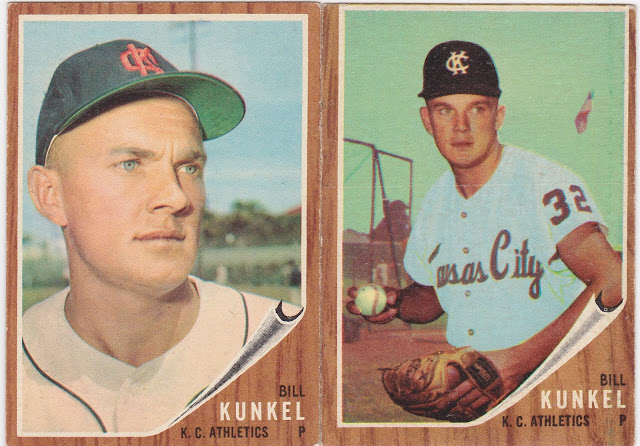 I'd have been mystified by the two different Bill Kunkels. And wanted them both. There are seven or eight cards that show the same player with alternate poses. All come from the 2nd Series (cards 110-196). I won't post them all but here are my two favorites, Wally Moon and Lee Walls. Moon is the only one I remember noticing when these cards were new. Which, now that I think about it, is evidence that we got some of the 'botched' 2nd Series cards in Essex County, New Jersey in the spring of '62. 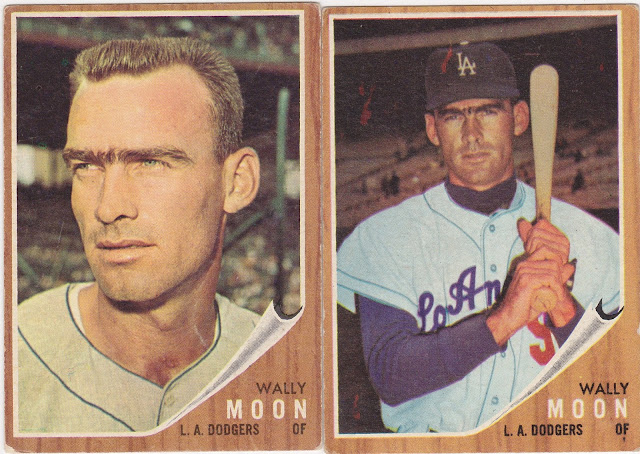 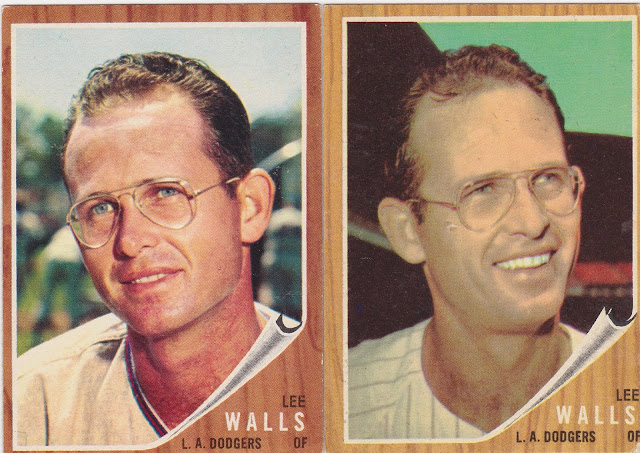 The story behind these is that Topps farmed out the printing of the series when they got into a crunch. The plates were damaged in transit, some could be salvaged, some not and those were remade. That is also the reason that the 2nd Series has 'green tint' variations. PSA has the story, or at least the most widely accepted version of the story on their website. 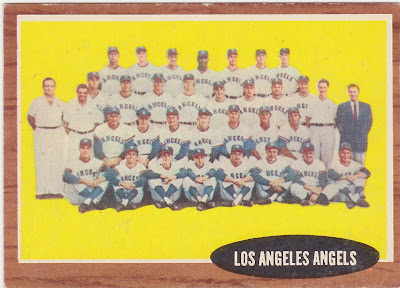 Angel team card...no problem. But your friend opens a pack three days later and gets this..... 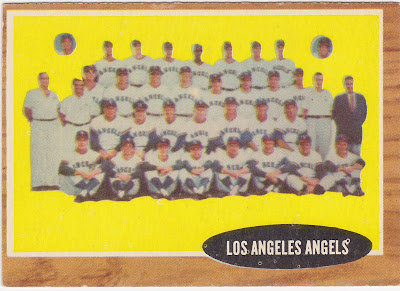 ...Angels team with two floating heads? The hell? This would have been a difficult decision for me as a kid but I'm pretty sure I'd have wanted both versions. So I have them both in the binder now. And no, I don't know who the two floating heads are. I think I had an answer at some point but it's eluding me right now despite my decent google skills.

But those were fairly straightforward and easily addressed issues. More complicated is the Card #139 Hal Reniff/Babe Ruth deal. The Ruth card below is part of the Babe Ruth Special subset in the 2nd Series. It is the 'correct' #139 but not nearly the only one. I'm going to try to sort it out by memory:

Yikes. My sense is that I've have had to collect the Ruth and the three Reniffs (both portraits and the one action pose). So that's what I picked up for the build.

I figured a look at the back of the Ruth/Reniff mess couldn't hurt.

I've saved discussion of the 'green tints' until now. They are an interesting variation. I really don't have a handle on how I would have dealt with them in 1962. I suspect I'd have noted the differences but not cared. After all, the pictures were (except for the previously noted changes) the same. They each have minor cropping differences but I never would have noticed that. Sidebar: I found an interesting page that defines and shows each of the versions of the green tints. Fascinating stuff (to me anyway).

Some of the differences are subtle. The Pumpsie Green (irony noted) for example: 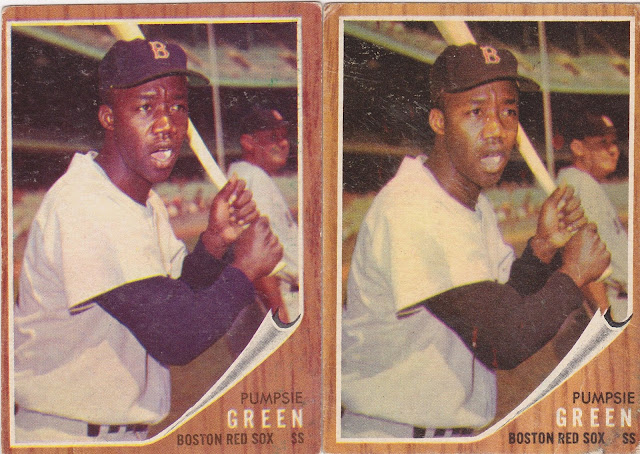 The color variation isn't particularly noticeable until you put the two cards next to each other. The cropping differences can be seen in the upper left corner where the upper deck meets the card border differently. The color of the woodgrain border also varies. I guarantee I never would have noticed that as a kid.

But some of the green tints look like this: 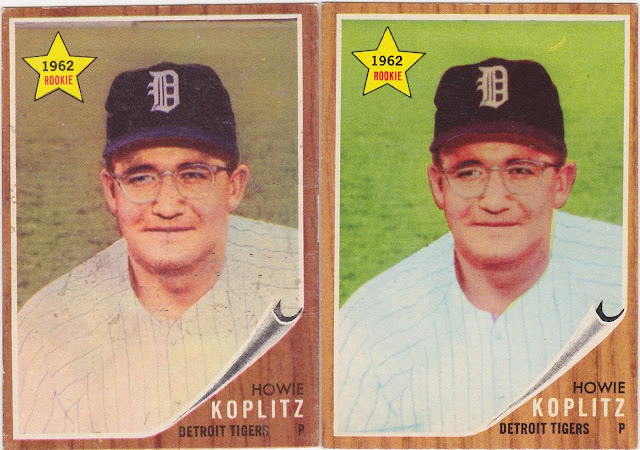 That, my friends, is hard to ignore. But I'm guessing my youthful self would have passed it off as just a 'hey, too much green ink' thing.

And some, like the Bob Nieman cards below, fall somewhere in the middle: 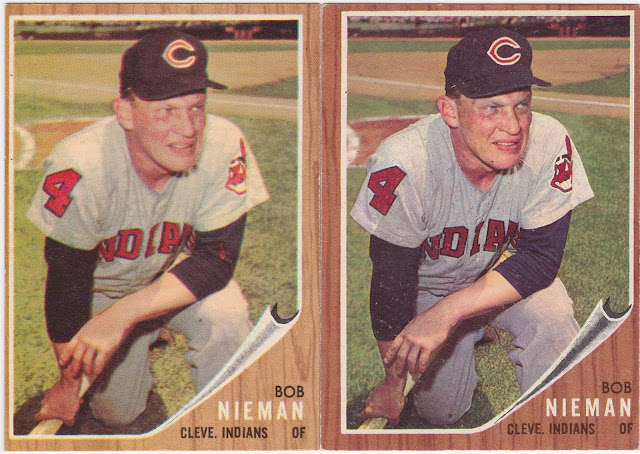 What did I decide? Well, I figured a nine card 'green tint example page' in the back of the binder would take care of it for me. And that's what I've done.

As with my other set builds, I have added inserts to spice things up. But to me they are just gravy. My set would be 'complete' without the extras. 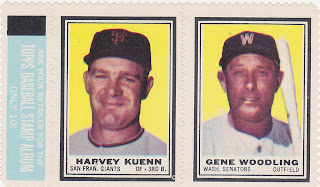 The stamps are fun but I prefer the 1961 version done in green and brown. To me not every 'advance' means progress!

I had this Gus Triandos Baseball Buck in my Orioles collection. Gus agreed to move to the '62 binder for the cause. Oh, one thing I just now noticed. The text over on the left side ends with "He's an ex-Yankee." So what?

I will add a wrapper at some point. I think it's more of a part of a 'complete' set than the inserts but it is also much more costly. I can wait until I find the right one.

A couple of weeks ago I saw someone mention a 1962 printing plate that they had in their collection. I had never considered that before and thought it might be a nice addition to the '62 build. But I wasn't going to go overboard. i found this example of a common card plate on eBay and picked it up. It has ink residue but I don't mind. 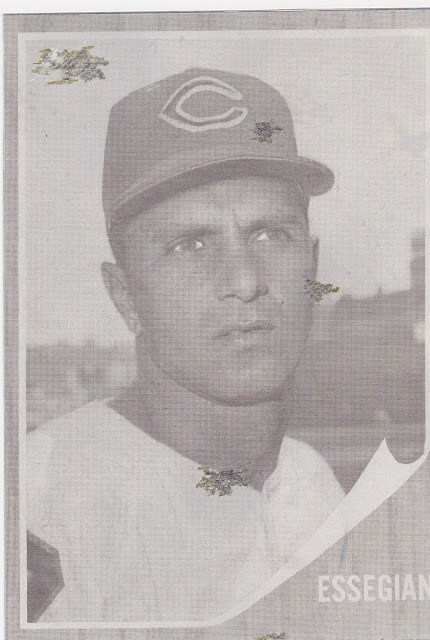 So there it is....the 'Commishbob' version of a complete 1962 Topps baseball set. It's not a 'master set' but it has everything my complete set definition calls for.

The '62 set doesn't get a lot of hobby love. There are too many capless player photos and the wood-grain border isn't to everyone's taste. I've even read comments criticizing the All Star subset which 'too closely' resembles the base cards. Oh, well. But I challenge anyone to come up with flagship set whose opening three binder pages match the 1962 Topps for star power. Check them out: 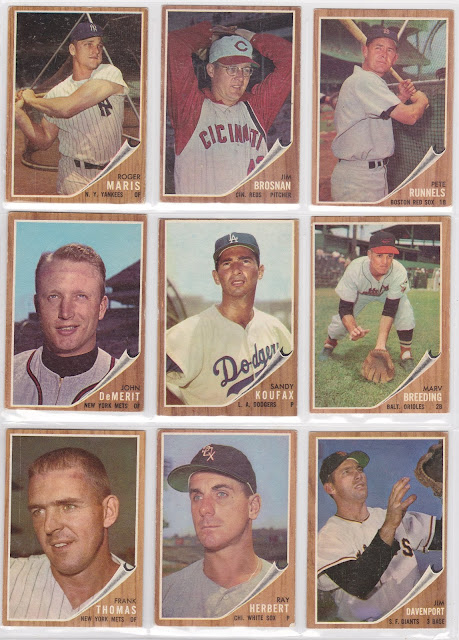 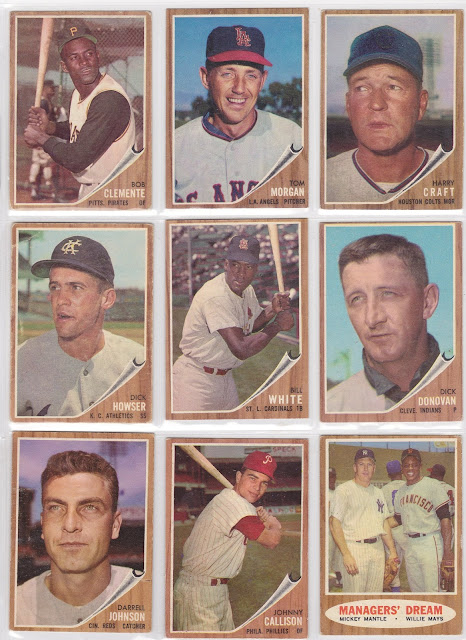 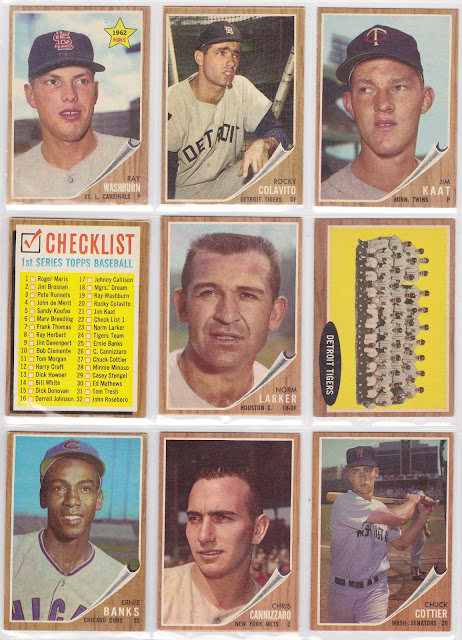 Good stuff, right? I thought so.
Posted by Commishbob at 9:01 AM