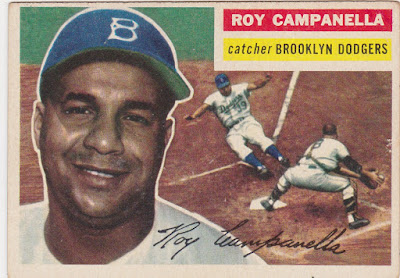 EDIT: I'm not sure what happened to this post. It reverted back to draft form and much of it was lost. Anyway I am posting it again after rewriting what I recall of what was here before. Blogger hasn't been kind to me lately.


In my neverending quest to acquire cards I don't really need but really want I bought this 1956 Topps Roy Campanella when it was put up for sale by a Net54 member. I previously had no other career era Campy's and, as with Jackie Robinson, I wanted to rectify that. The closest was my 1959 Symbol of Courage card that Topps included in their high numbers that year. 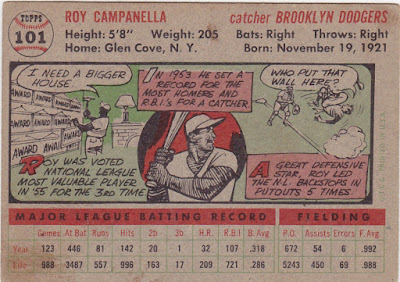 I don't have to tell any card hobbyists how wonderful the 1956 Topps set is. It's almost universally beloved as one of the iconic vintage card designs. Campy's card is a great example.  The front, in addition to the portrait, shows Campy slinding into home. Odds are the opposing catcher is Yogi Berra. But a Getty Image search of the two Hall of Famers didn't turn up anything that might be a match as the original. It could also be the New York Giants catcher Ray Katt who wore #8 in the 50s. Then again we all know that Topps' artists sometimes snagged a photo and painted it as  someone else. (Sliding Willie Mays sez 'Hi!')

Here is his NY Times obituary.
Posted by Commishbob at 2:38 PM