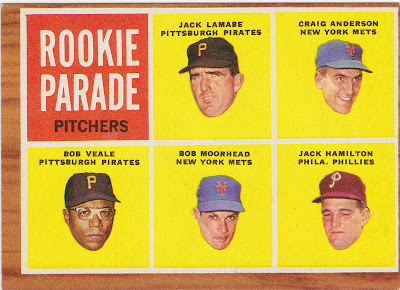 If there is one thing I'll always be grateful to Topps for it's floating heads cards! As I wind my way towards picking up the final 60 cards in the 1962 set I've found myself tracking down decent yet affordable copies of these fun things. The '62 set wasn't the debut for these with Topps. They used the 'floating heads' style with coaches cards in the 1960 set. But I recall being disappointed at getting coaches cards in 1960. Not so with the Rookie Parades of 1962.

There are eight of these that bring up the set's rear. They are 'sorted' by position and feature pitchers (3 cards), infielders (also 3 cards) and one each for catchers and outfielders. The NL drew the short straw however as two of the three pitchers cards AND two of the three infielders cards were devoted to AL players. The poor NL had to make due with one of each. The outfielders and catchers cards had players from both leagues.

As with Topps Rookie grouping through their history, the players featured went on to careers that vary widely.  This AL pitchers card is a good example. 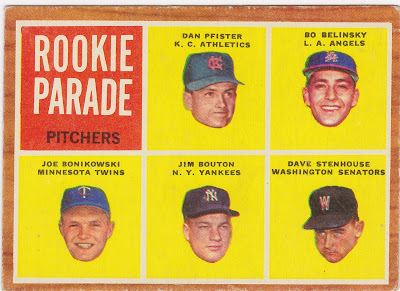 Bo Belinsky and Jim Bouton are well-known names, mostly for off-the-field reasons. Dave Stenhouse and Dan Pfister saw most of their action in 1962 (Stenhouse made the ASG!) and Joe Bonikowski came and went quietly with one year of major league service. 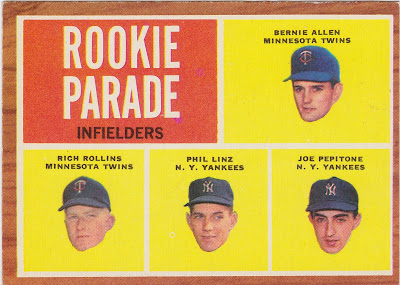 These four AL infielders (two Twins and two Yankees) all had long careers. Trivia time..... which of these four players got consideration in the 1962 AL ROY balloting? Answer at the bottom.

Sidenote: Joe Pepitone dated a friend's older sister for awhile while in the mid 60s. She was what was referred to back then as 'fast'. The family was Greek-Italian and very...ahem...colorful. My friend was about a few years older than most of the kids on our block. And he'd 'been around' if you know what I mean. But he was a geat guy, a good friend and the best ballplayer I knew. He was the guy everyone wanted on his team, our version of Benny 'The Jet' Rodriguez.

Of the NL infielders, Denis Menke and Hot Rod Kanehl had the best careers. Amado Samuel stuck with the Braves for three seasons. Jim McKnight had 91 big league at-bats. 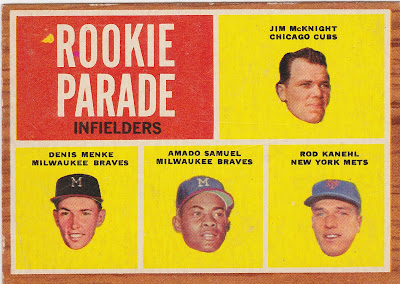 The catchers card is the most costly of the subset. It features Bob Uecker. I was lucky to find this one at a (relatively) good price. It's going to stay in the case until I work up the guts to free both it and my graded '62 Willie Mays. 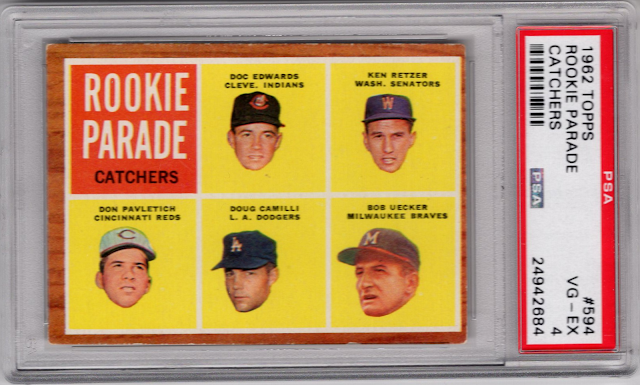 My favorite head belongs to Bob Veale on the card at the top of the post. I always love his glasses. I'm currently awaiting the arrival of the second AL infielders card. I nabbed it off eBay after failing to find it at the TriStar show over the weekend.

I did locate a copy of the outfielders card at the show but the dealer was mighty proud of it. I can wait.

The eighth card of the group features Sam McDowell and four other AL pitchers. It may be awhile before I buy that one. The reason is that one of the 'other' pitchers is the Orioles' Art Quirk. I have one of those cards....somewhere. I have all the 1962 Topps cards of Orioles but at the moment they are eluding my grasp. I have all my original Orioles year-by-year team sets in a box but the '62s are missing. I've done thorough searches on two occasions and come up empty. It'll be just my luck to pay $40 or $50 or more for a copy of that #591 and then find my other copy the next day. I'm in the same boat with a couple of other O's from the set who appear on higher number cards. Chuck Estrada for one. The other Orioles I had second cards of in player binders or came cheaply.

BTW...Art Quirk was an interesting guy. I looked him up the other day and found myself going down a fun 'rabbit hole'. He was featured in Sports Illustrated during April of 1962. He was a Dartmouth grad and after his brief baseball career led an interesting and productive life.


Trivia Answer= Bernie Allen. He finished behind Tom Tresh and Buck Rodgers. He was tied with Dean Chance and Dick Radatz. In the NL Ken Hubbs won the award over Donn Clendennon. Of the seven players who received votes only Radatz appeared on one of these floating heads rookie cards.