My ongoing re-organization efforts have led to me coming across stuff that has been 'buried' in boxes and binders. I found a stack of  50 or so of these Orioles 50s/60s Picture Pack photos. KeyMan Collectibles' website has a nice summary of the origins of these. They were sold at ballparks and through the mail in 'packs' of 12 to 25. Most were produced by Jay Publishing. KeyMan notes they originated in the 40s but I see some online that look to be from the 1930s.

I bought sets at Manny's Baseball Land souvenir store across River Avenue from Yankee Stadium. Manny's was the 'walk-up eBay' of the day. They sold everything! Others came from Memorial Stadium concession stands or through the mail from the team. Some of the ones I'm posting originated from my purchases back then. Others I've bought through the years. All mine (and all the others as far as I know) are 5x7 pics on semi-gloss paper. Some of the Orioles shots were taken by the team's 'official' photo guy, Mort Tadder.

I thought I had one of the original team-issued envelopes but that might have fallen victim to earlier 'purges'. I came across a few pictures online of other teams photo packs: 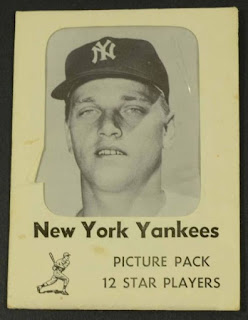 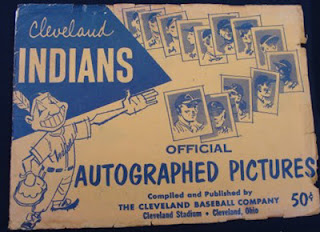 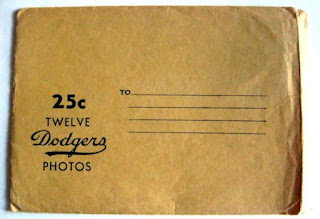 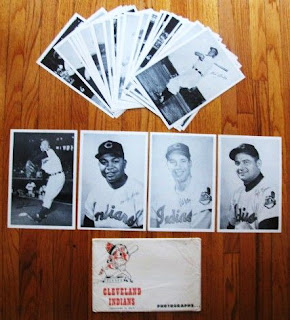 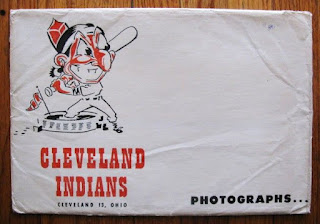 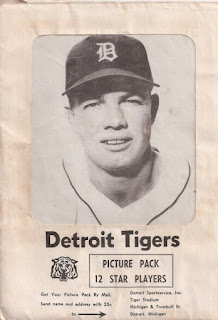 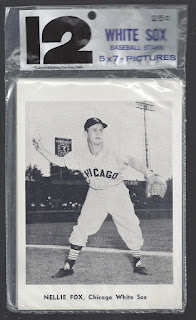 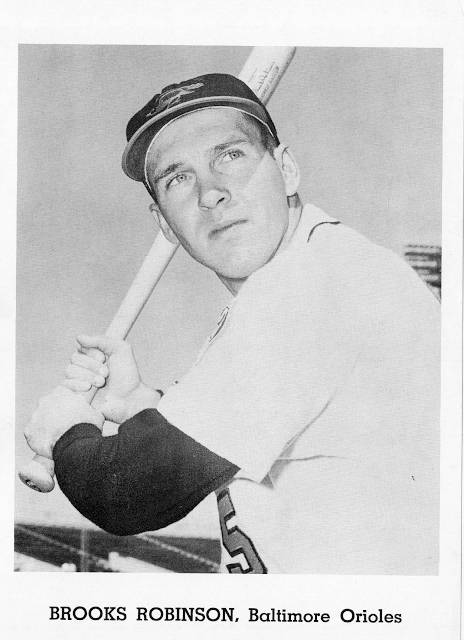 I wasn't surprised that I discovered several of Brooks in my stack but I was at having three Jackie Brandt pictures. He had a nice run with the Orioles from 1960 thru 1965. He was indirectly part of the deal that brought Frank Robinson to the O's. He traded to the Phillies for Jack Baldschun who was part of the package the Birds sent to the Reds three days later. These next two photos look to be from 1962 or so. 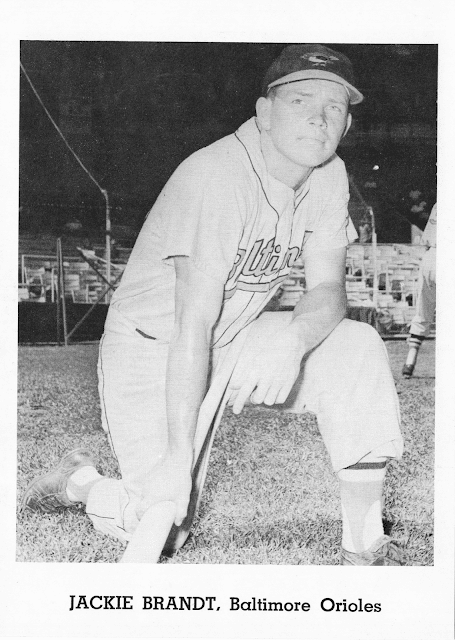 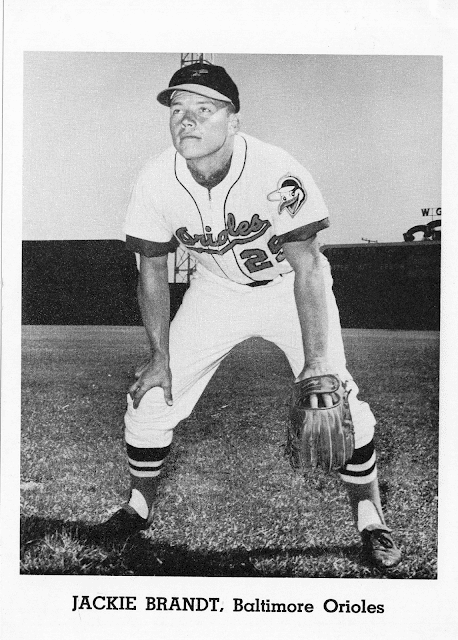 This third Brant show him in their highly under-appreciated 1963 home uniform. Brandt played third base for the Astros in the first game I watched in the Astrodome in the summer of 1967. 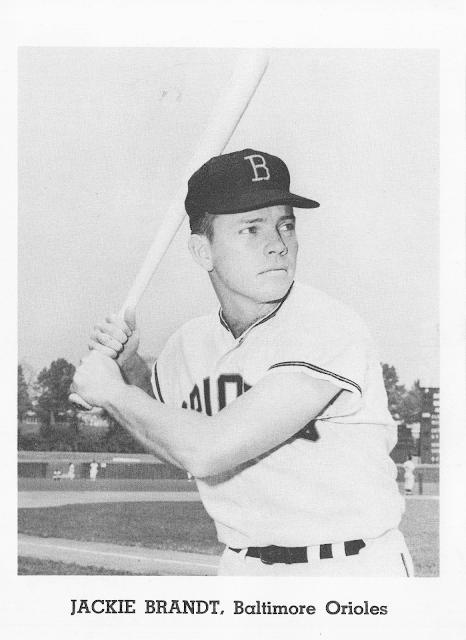 Next is Tall Paul Richards. I've seen this photo a time or two (or 12). For one thing, it was used on his 1960 Topps managers card. 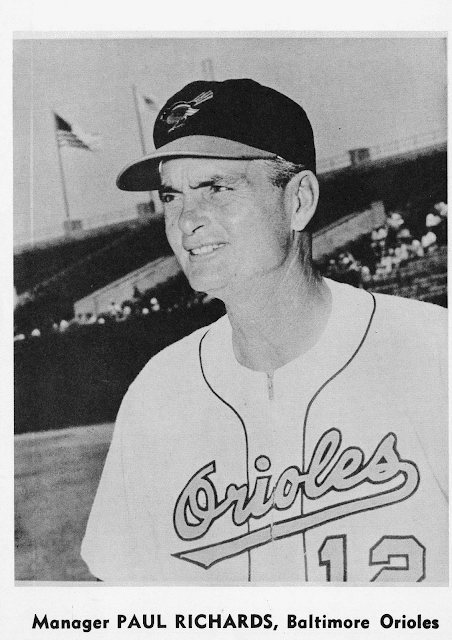 Hoyt Wilhelm threw his knuckleball in Baltimore from '58 thru '61 which helps me date some of these things. 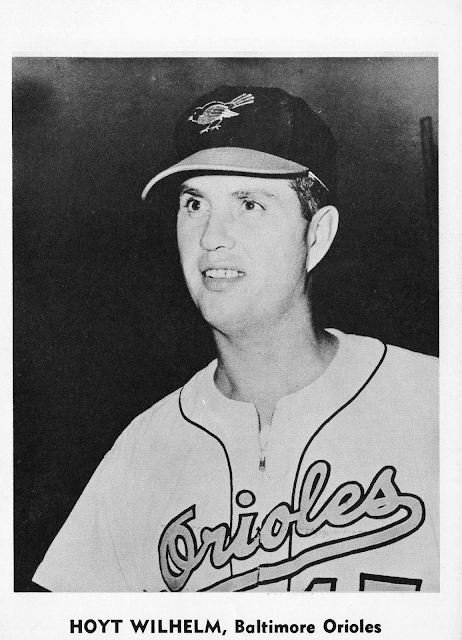 Robin Roberts won 42 games for the Birds in the early 60s and few folks even remember him being there. I saw him beat the Yankees at Yankee Stadium but I'm not sure what year it was. 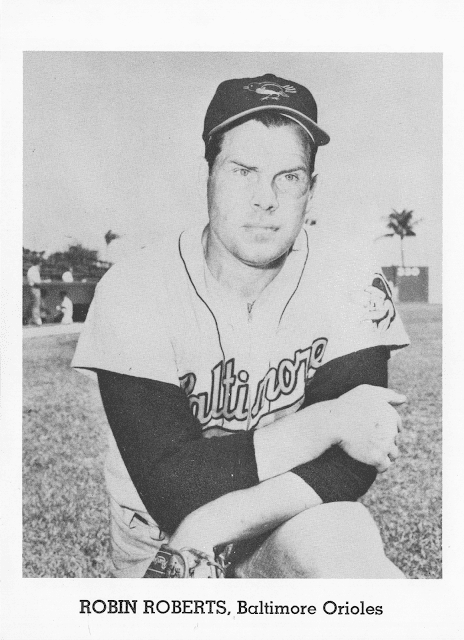 The sets contained many similar photos from one year to the next. Check out these two Chuck Estrada photos. Same Memorial Stadium shot with different cropping. I have multiple examples of this same thing. 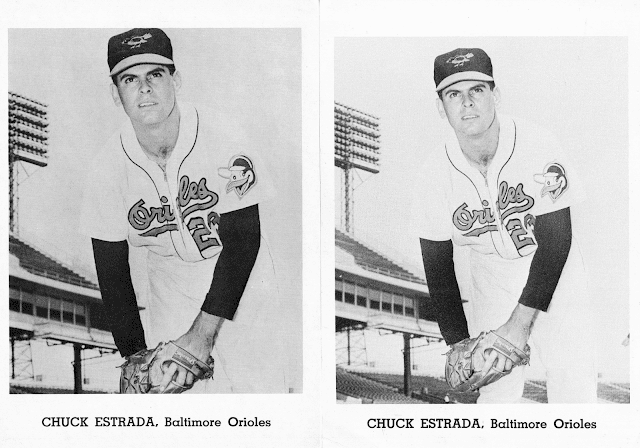 Jim Gentile...my uncle loved this guy. Said he was 'a man's man'. Whatever that meant. I guess it meant he could hit the hell out of the ball. 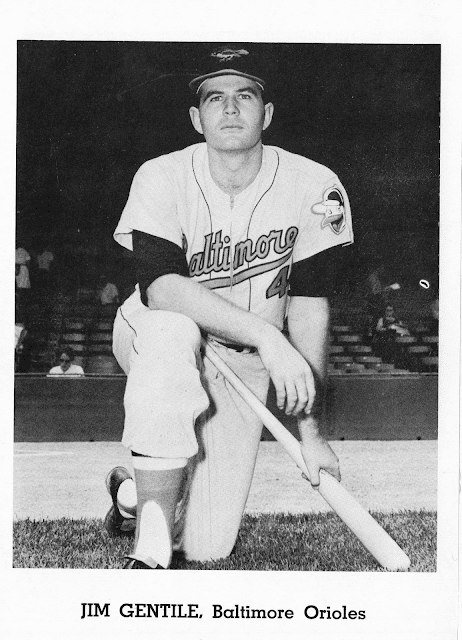 Notice anything odd about this next one of Luis Aparicio? 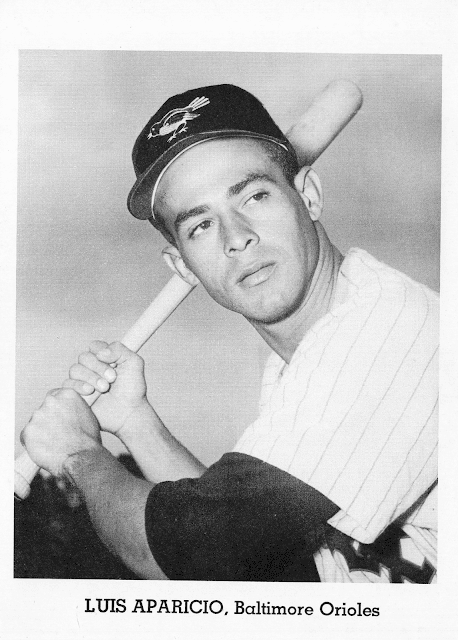 Yup, pinstripes! Ack! And you can see a part of the interlocking S-O-X logo on his shirt. The photo the only Orioles one I've seen that has been altered to reflect a team change. But Jay Publishing (or whoever was responsible) did a really nice job of changing his cap.

Wes Stock was a pretty handy reliever. He was more or less a set-up guy before they called them that. Back then they went a couple of innings. 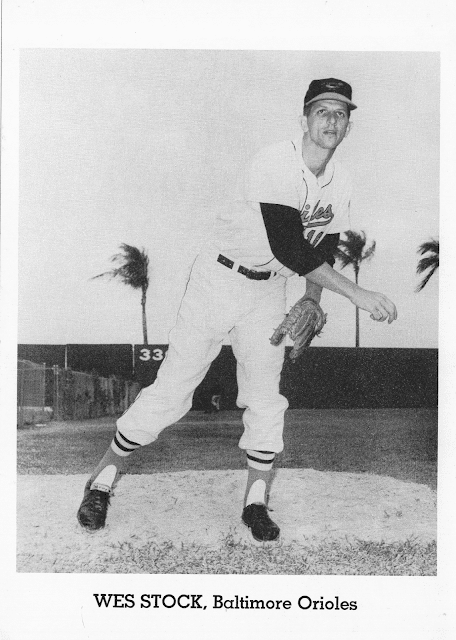 Gus Triandos was the big bat in the Orioles lineup during their early years in Baltimore. Like Brandt and Roberts, he ended his career with the Astros. Jim Gentile popped up in Houston, too. That was all Paul Richards doing as he became the team's GM. 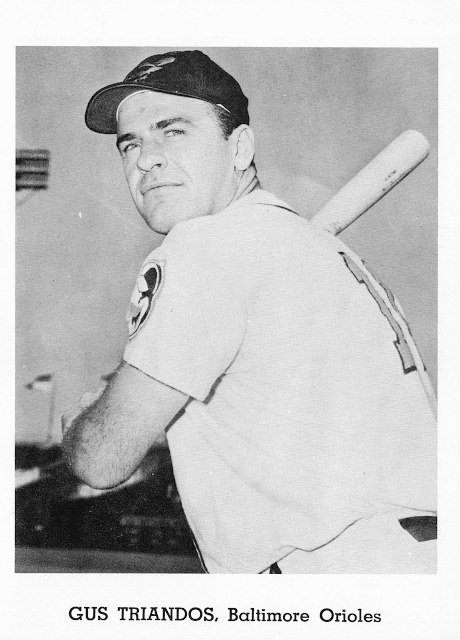 Steve Barber had a brief run as the O's ace before Jim Palmer claimed that job. 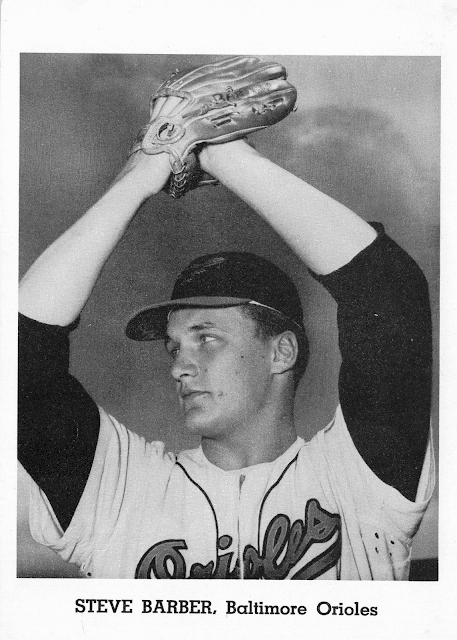 I have quite a few photos that date from 1956/57 or so. Dick Williams is one. He had several stints in Baltimore as a player but that cap dates the shot from 1956ish. 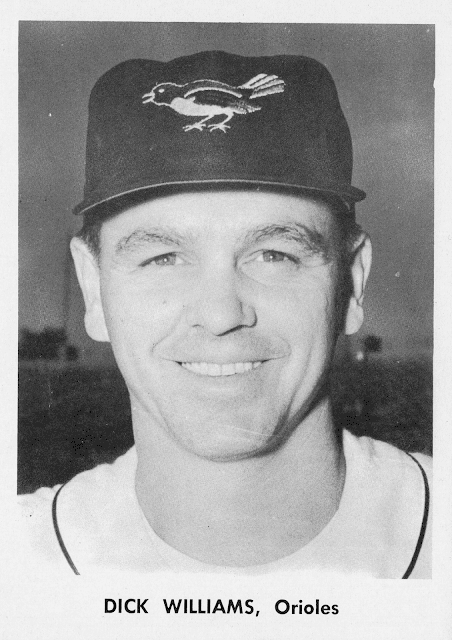 George Kell finished his Hall of Fame career in Charm City in 56/57. 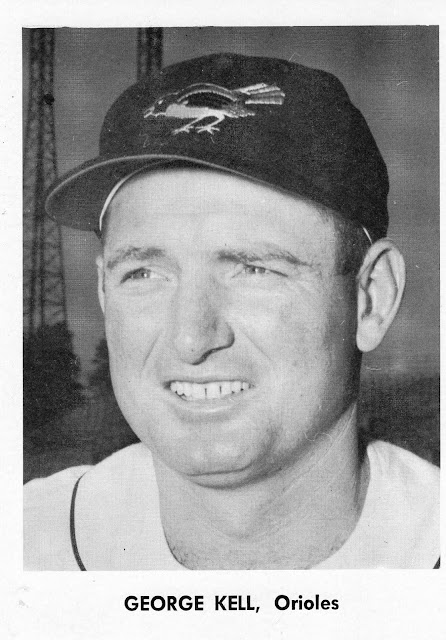 Back to the early 60s for a Ron Hansen picture. Love that sleeve patch Bird! 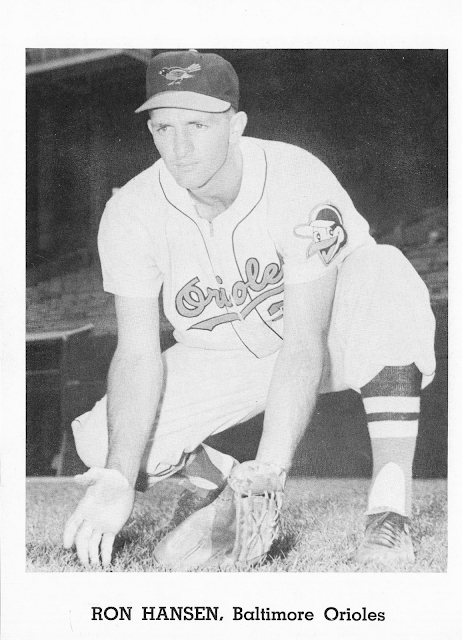 And we'll end this bunch with a 1963 shot of Brooks Robinson. 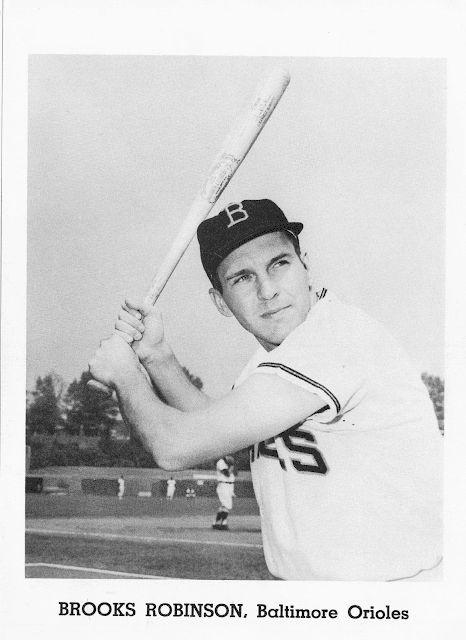 Tucked into the stack was this other Brooks Robinson photo. It was slightly smaller than the Picture Pack photos and on different, thinner matte paper. It's also clearly a Mort Tadder photo. He was the Baltimore area photographer whose work is easy to spot by Orioles fans. The pics he took, including hundreds of team-issued postcards, were everywhere. 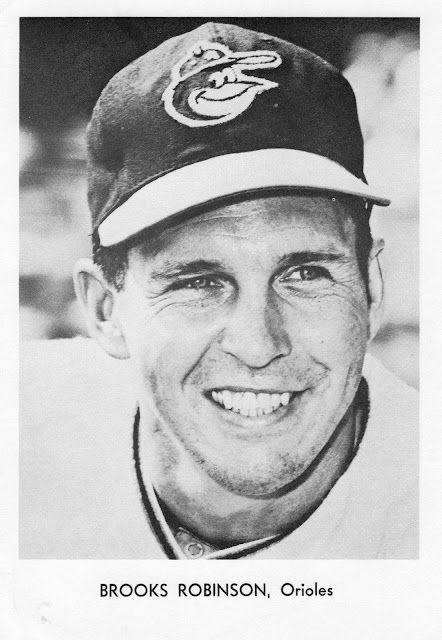 I have no idea where it came from but the photo and font used are identical to the glossy Brooks photos the team sold back in the 70s and 80s. I'm guessing someone just copied and reproduced it for whatever reasons.

Posted by Commishbob at 8:48 AM