One Project Finished, Many To Go

Over the weekend I avoided the deadly Houston heat as much as possible and spent about 7 hours on a hobby project. Over the last year or two I've wasted countless hours searching for cards of my fantasy players as I picked those players up either in drafts or thru waivers. I wanted a better system than shuffling among small boxes, assorted desk stacks, etc. This was something I felt was long overdue.

I pulled out a couple of 1600 count card storage boxes and made two sets of section dividers using rigid card sleeves and labels. I gathered all my cards of current players. After sorting them into hitter and pitcher stacks I alphabetized each group. My new sorting tray came in handy!

Now that I'm done I won't waste time searching for a card of a player I think I have and maybe, more importantly, I won't end up buying cards of players I already have. I can't tell you how many times I've done that.

OK, so this isn't such an interesting post. And no cards in it!

I'm fixing that with this card of White Sox catcher Omar Narvaez. I liked what I saw of him when I went to see the Sox play the Astros and nabbed him for a couple of my teams. Then I found that he doesn't have any mainstream cardboard.

On eBay I found a Honus Bonus card of him. I had no idea these were real cards. I remember hearing the name of the set somewhere, either on a blog or in a hobby publication but never thought much about it. I assumed (wrongly) that it was some sort of online thing like eTopps or the cards that people chase with phone apps.

Googling told me these were a 2017 issue, was an unlicensed set, the cards were used as some sort of fantasy baseball game, and there is no sign of the brand in 2018. Easy come, easy go. 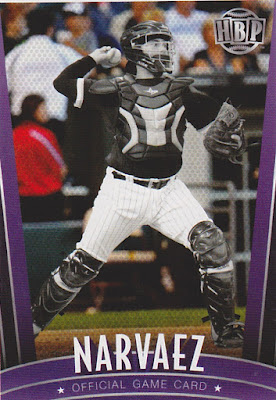 When the card arrived I saw that sure enough, the back is contest-related.  I got a chuckle out of how they designated his team as 'Chicago (South)'. I figured the Cubs would be 'Chicago (North)'...they are. Curiosity got me to COMC where I saw the Yankees cards were listed as New York (Bronx) and the Mets were 'New York (Queens)'. For some reason, I liked that a lot. 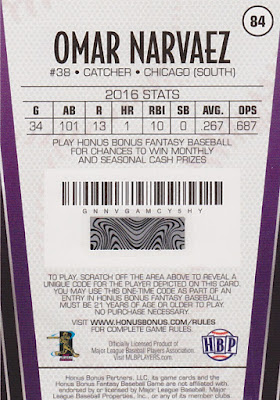 Sooo...happy day. I have a Narvaez card and it even fills one of my preferences...a bit of variety among my fantasy binder cards.

Now that my fantasy baseball cards are in order I'm going to move on to football. Then other projects will be tackled including putting my player collections into binders and doing the same with my non-sports sets. All those are in boxes. Wish me luck.

Posted by Commishbob at 6:02 PM