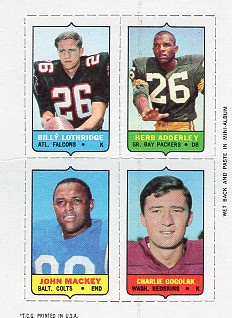 These  Topps 1969 inserts called "4 in 1's" are actually stamps which were intended to be separated and placed in the appropriate team folder. They are 'stamps' rather than 'stickers' in that they have moisture (spit!) activated glue on the reverse rather that a peel-and-stick system like the Fleer stickers everyone has stacks of from the 80s. 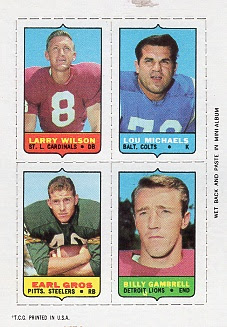 There were ten Colts issued and many, if not all, use photos that were also used on the 1969 regular issue cards. I think a couple used photos from earlier Topps sets but right now I'm too busy to verify this. You can see more of these in this post from my Baltimore Colts history series.

Johnny Unitas graced the cover of the album which was the same size as the 4 player 'cards', the standard 2" x 3". EDIT: I found this article with more detail on these including a few variations. 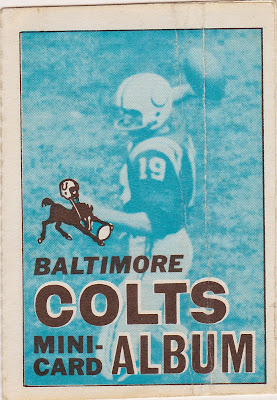 Despite of the fact he was the album cover boy (or maybe because of that) he was not one of the two 'Colts Stars' that were featured in the little album's centerfold. 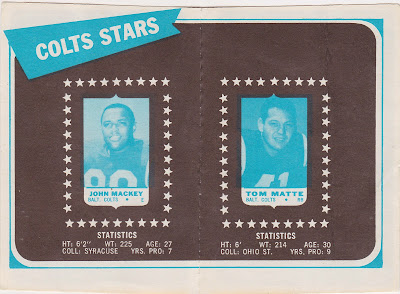 Angus' swell gift inspired me to go find my final needed stamp card (Willie Richardson) and I snagged it recently. Slowly chipping away at my Colts list will be a fun retirement project.

Angus helped stuff the envelope with this Ray May Action Packed card which I didn't have. Since it was from a 1990s set I hadn't gone after it. But it does picture a BALTIMORE Colt and is intended as a salute to an honor he won with them so I can happily add it to my binder in the miscellaneous Colts card section. 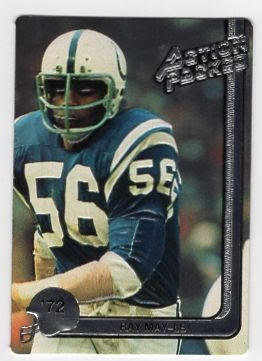 Man, my scanner did a terrible job on this one. Silver foil+embossed surface=multiple attempts to get a usable image. LOL 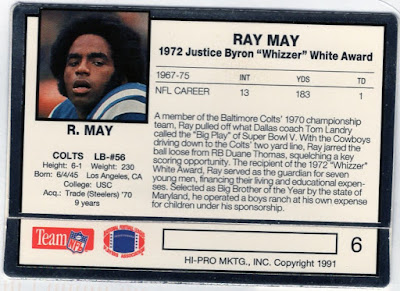 Angus, thanks so much for the cards, for reading and remarking, and for cranking up your blog again. Maybe the cards I have headed your way will help in a small way to brighten up a lousy Browns season.