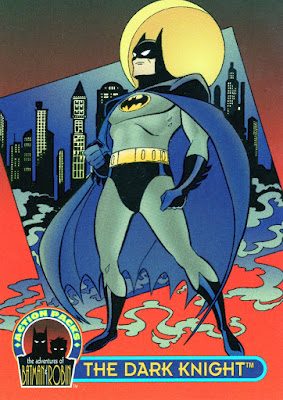 About a month ago Tom of The Angels, In Order contacted me to ask if I was looking for any cards from the 1996 Sky Box Action Packs/The Adventures of Batman and Robin set. My answer was "I would be if I had knownit existed!" Even as a collector of all things Batman I'll admit that my modern card game needs to be stepped up. My sons were 8 when the TV series was popular and I watched a bit of it here and there when I could. But those were busy times for me.

According to the BatmanWiki this set is based on the second season of the televised Batman: The Animated Series. It consisted of 20 episodes. I love the artwork. Batman has gone through many changes over time. This art is among my favorites.

Tom was kind enough to send what is pretty much a complete set, wrapper and all. Research (and Tom's envelope) told me that there are four 'card' components to this and each pack also came with gum. The set itself is pretty small, 36 cards plus the assorted extras. But what it lacks in size it more than makes up for in 'coolness'.

Here is the sample wrapper that Tom included. 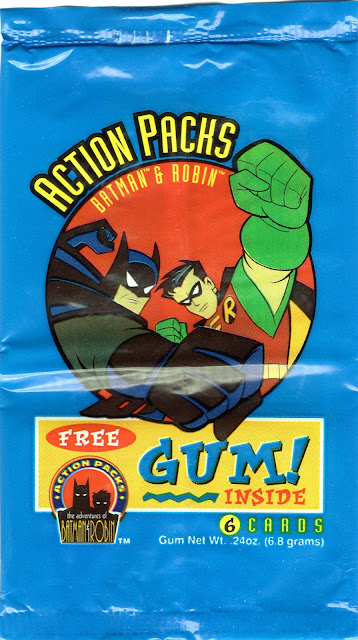 The card at the top of this post and the next couple are 'game cards'. They are the closest to what might be called the 'base set'. Total of 12 comprise this group. 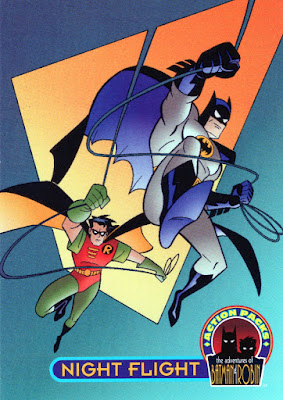 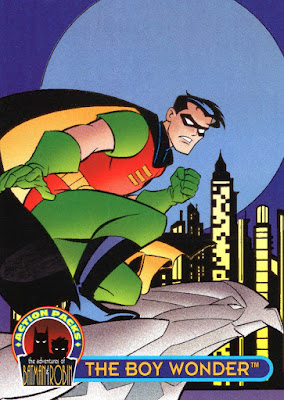 The backs form a game board. 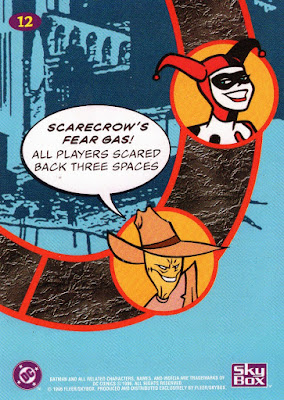 One card has the game directions on the reverse: 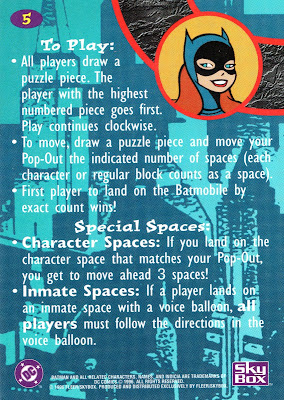 There are 12 'Pop Out' cards which feature the major characters: 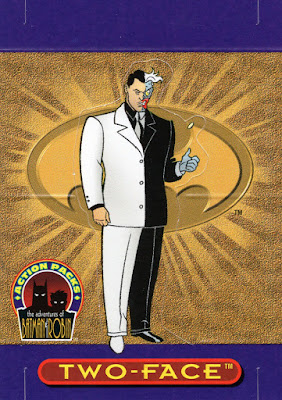 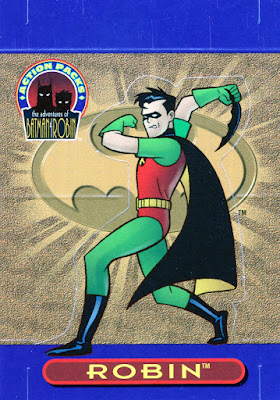 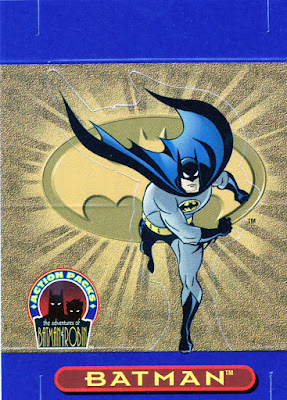 The back of each had instructions on how to make them stand-ups: 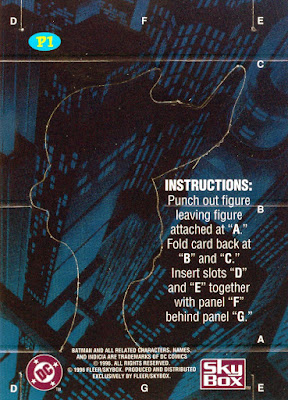 Being an activity set aimed at kids there were six cards meant to be colored: 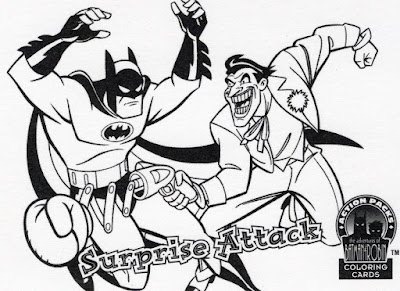 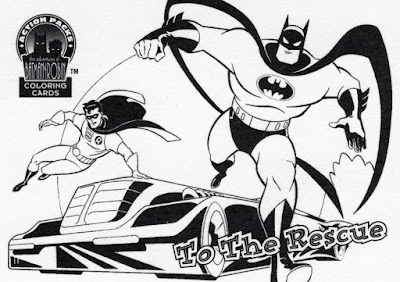 Quiz questions forms the backs of these: 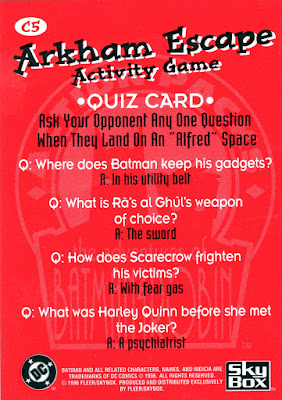 And there are also six puzzle cards: 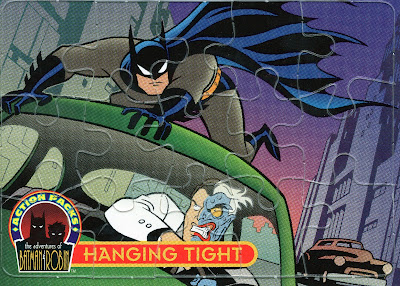 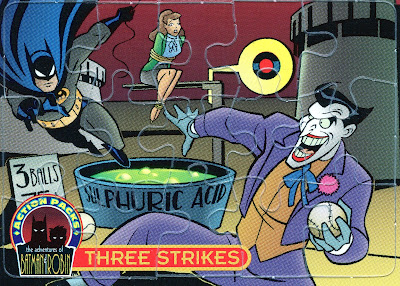 Here is a look at the backs of these: 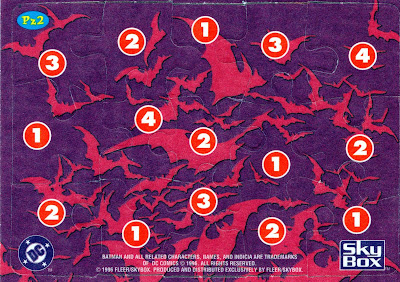 New to me is the gum sealed in cello with four different characters printed on them. Tom sent the whole group. Tough to scan but a fun addition. 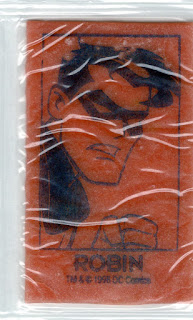 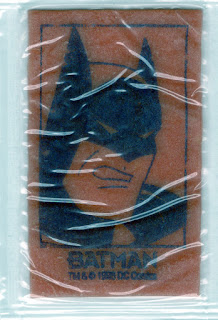 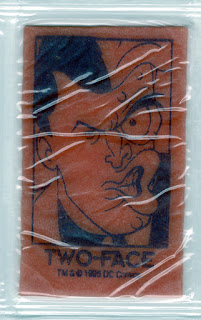 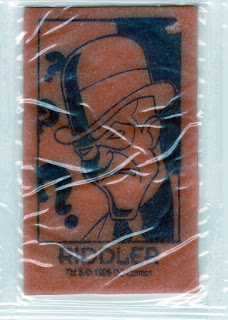 The 'completist in me appreciated the fact that Topn included the Eskimo Pie coupon that was inserted in each pack! 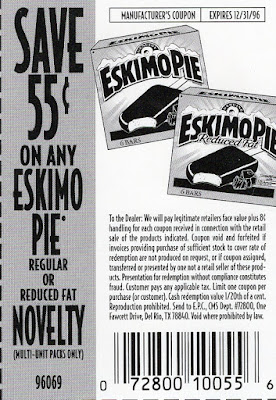 Poking about on non-sports sites told me there was a 'promo' card. I found one on eBay for a buck or two. It is pretty much a dupe of the Batman pop-up card on the front. Here they are together with the promo card on the left, regular card on the right: 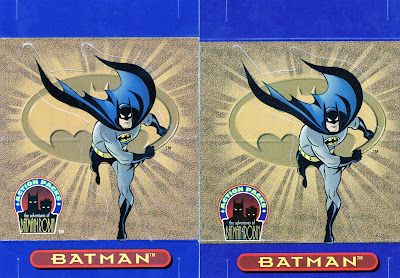 The backs with the promo card announcing the sets release date, etc. 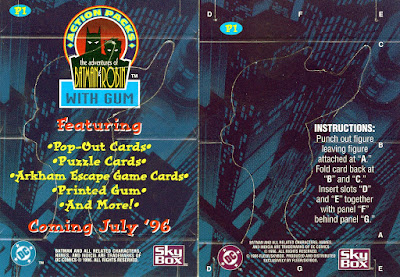 I can't end this post without showing off a couple more of the sweet 'base' (or technically 'game') cards. This whole thing looks really great in a binder. 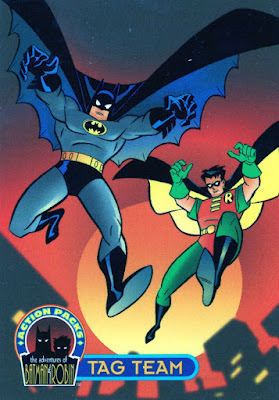 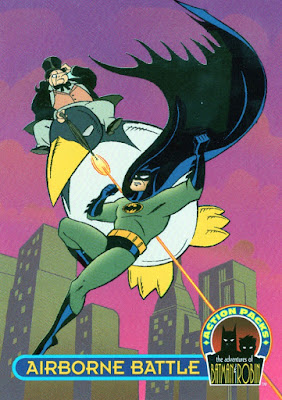 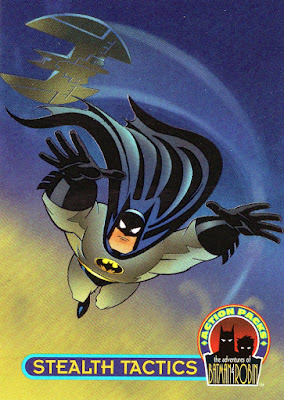 Tom, I really appreciate your generosity. This is a nice addition to my modern Batman collection. I have a few things set aside for you and once they holiday nuttiness quiets down I'll be packaging them up for you.
Posted by Commishbob at 5:00 AM

Email ThisBlogThis!Share to TwitterShare to FacebookShare to Pinterest
Labels: Batman, Sky Box, The Angels In Order