Gale Sayers (and the perils of social media)

Social media can be an awful place, but I didn't have to tell you that, did I? I have Facebook and Twitter accounts but sometimes you just have to walk away from them for a bit. At least I do. But there is some upside to them too, if you know how to filter the garbage.

For example a couple of months ago I saw posted a shot of the great Bears runningback, Gale Sayers. It reminded me that one of my hobby goals has been to pick up the Sayers rookie card out of the 1966 Philly Gum set. It's been a card I've wanted but wasn't going to overpay for. Nor was I going to buy a terrible copy just to say I had it. A couple of weeks after I started looking I found this one on eBay. 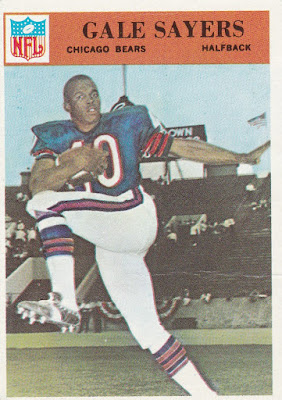 It's flawed but still very collectible. Any Philly Gum card you come across is likely to be flawed. That company had some real issues with quality control but there is no disputing the fact that their cards are classics.

Oddly my new scanner hated my copy and gave it what looks like a 'diamond cut' but in hand that's not the case. The fact that it's off center can't detract from the awesomeness of this thing. That's Soldier Field in the background, pre-renovation Soldier Field to be exact.

As for Sayers...he's right up there among the most exciting players I've ever seen.. His career lasted essentially five seasons but when he was on the field he was the center of everyone's attention. He came out of college with a nickname that would truly define his career, the Kansas Comet. And like a comet he was brilliant and flashed past us all too quickly. 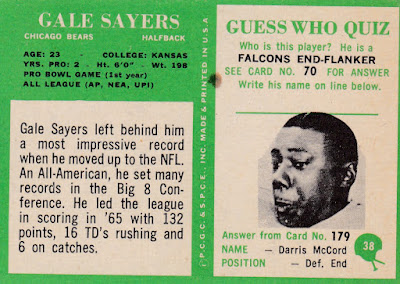 The cardback has an obvious flaw, that burn-like mark but I'm just happy to have been able to find one in decent shape that didn't break my budget. While doing my searches I also came across a nice copy of the 1970 Sayers Topps Super. These are very affordable so I nabbed one as well. 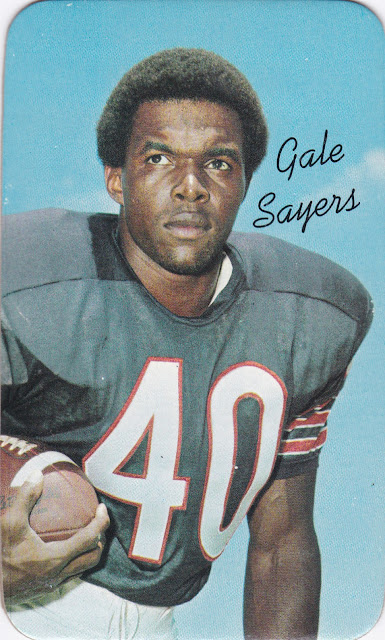 Here is the back: 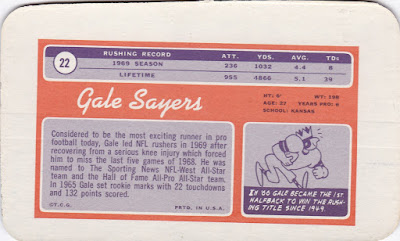 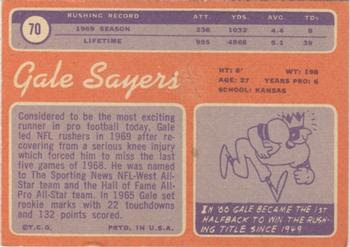 And back to the 'side topic' at hand, social media. I went looking on YouTube for some Sayers highlights. The best one I could find was pretty impressive. But to my surprise (and consternation) it's set to some music that contains "N Bombs" which made me glad I wasn't doing the search while I was at work. So I found another one to include here. Well worth watching even with the less than superb quality ...and you can experience the Staples Singers to boot. Check out his run at about 1:50 against the Baltimore Colts. LOL at my team.


I mentioned how tough Philly Gum cards can be to find in good shape. Here's the perfect example. PSA graded this one as an 8 despite the ragged cuts you can see along the sides. Everything is relative. 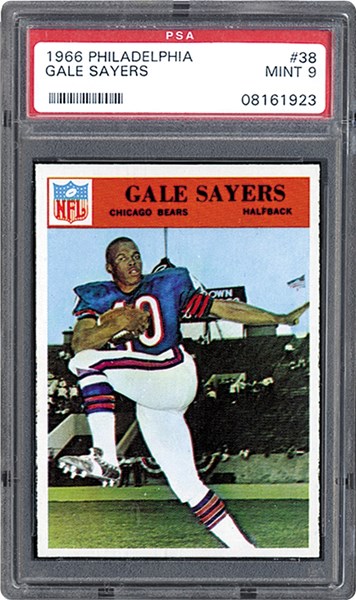 Within a few hours of my posting this Jedi Jeff, author of  2x3 Heroes and a knowledgeable Chicago guy posted a comment to this entry asking me about the stadium background on the Sayers card. His contention is that the pic was likely not taken at Soldier Field as I stated but rather Kezar Stadium, them home of the SF 49ers.

Now I had spent some time prior to posting doing some googling and felt pretty sure the the shot was from Soldier Field but Jeff had me doubting myself. I love old stadiums and poking around the 'net to find the origin of shots used in the Topps baseball sets I've blogged was always a treat. And sometimes I was challenged by a reader and found myself to be way off base.

I decided to go down this rabbit hole and see where it took me. I based my statement on the scoreboard partially visible behind Sayers. To me it matched the old scoreboard at Soldier Field. The following are the best shots I could find. 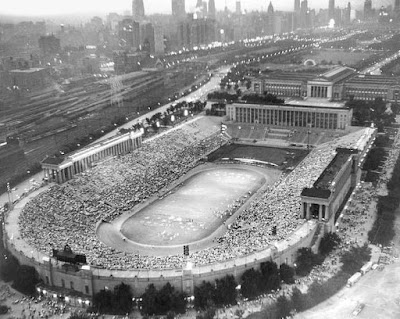 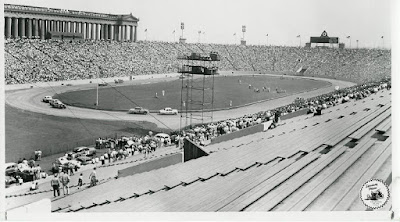 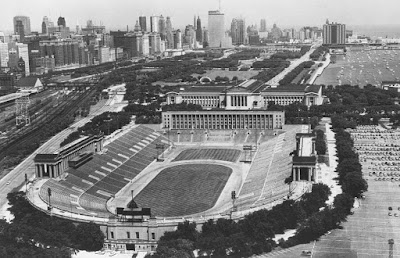 I clipped the scoreboard from the racing pic and part of the card. It looked like this:

Looks pretty close. Note the 'legs' that hold up the scoreboard and the position of the flagpole.

Here is a picture of Kezar Stadium from the 1950s: 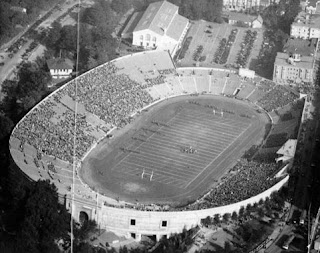 It's hard to see but the scoreboard doesn't look the same. But that's not exactly a deal breaker. Scoreboards come and go. But look closer at the pic above. Note where the ramps are in the area around the far end of the stadium. Here is a closer cropped look: 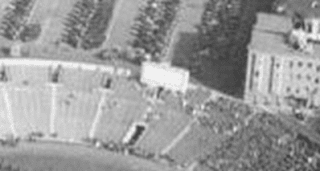 And it's certainly wouldn't hold up as evidence in court but this really neat piece of artwork sure looks like a match for the scoreboard in the card. 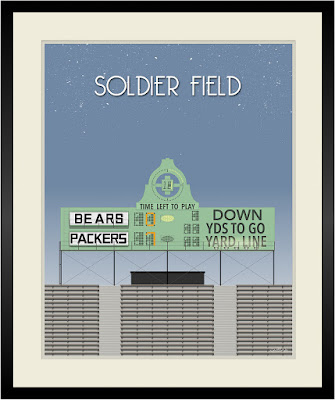 BTW...this Soldier Field rendering is one of many done by artist Gary Chanko. He is featured semi-regularly on the UniWatch blog and there is a Flickr site with all his scoreboard art. Very much worth the click!

And finally there is one more fact to deal with. Jeff pointed out that the Bears didn't use Soldier Field as a permanent home in until later. The Bears' site itself claims their home to have been Wrigley Field until 1970. But that's not entirely true. While Jeff's link to Wikipedia has them spending the 1965 season at Wrigley the 1964 season was played at Soldier Field.

So I'm going to stand by my original feeling that the 1966 Gale Sayers rookie uses a picture taken at Soldier Field. What say you jury of my peers?
Posted by Commishbob at 10:26 AM