I keep a spreadsheet which tracks my publications collection. For years I had the 1958 Orioles Media Guide marked off and assumed I only needed those from 1954 and 1956. A year or so I was rearranging my shelving and discovered that I lacked the '58 and added it to my want-list and eBay saved searches.

I was able to land one in pretty decent shape a month ago for about what I'd expected to pay. These are not things of beauty. And they are nowhere close to being as comprehensive as modern guides but they sure are fun to collect. the first few seasons the Orioles labeled them as 'Spring Training Guides' and the cartoon covers reflected that. But into the 60s the idea of a media guide to be used throughout the season evolved.

Anyway this one is 24 pages counting both covers. 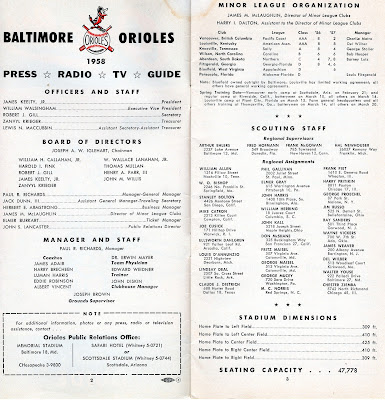 The Spring Training schedule includes just the Giants, Cubs and Indians as only four clubs were training in Arizona in 1958. The Orioles played three games against the Reds in Baltimore before the regular season started. 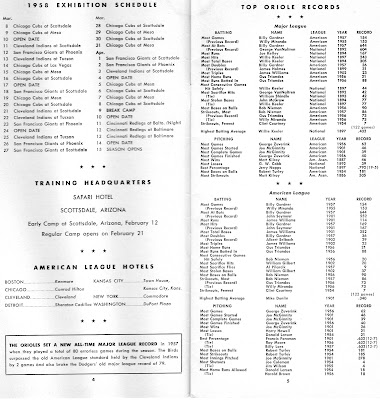 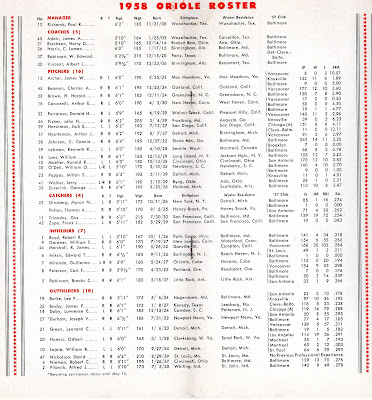 The player bios were mostly stats and basic info. I'm always interested in ticket prices from back in the day. The best seat in Memorial Stadium in '58 would have set you back $2.75! 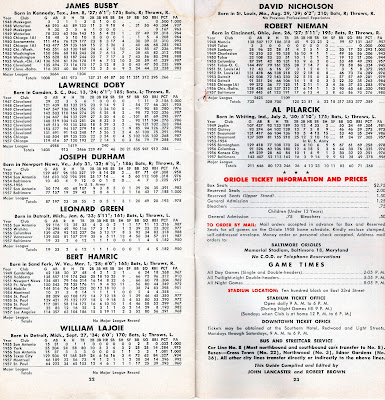 The schedules back then always had some quirks. Nowadays you'll never see a one day series as the Orioles played on May 30 against the Red Sox. Without looking it up I'm guessing that's a Memorial Day doubleheader. The BoSox played a single game in Baltimore in August as well.

And there are a couple of 'split' weekends when the Orioles host different teams on Sunday than they do on Saturday  (May 3/4, July 12/13, Aug 23/24). They have a couple of road weekends like that, too. Crazy, right?

Now my quest is actually down to two guides. I'm prepared to pay whatever it takes for the '54 guide. The '56 is less expensive and I'll snag that one soon enough.
Posted by Commishbob at 9:18 PM